Confessions of a Special Needs Dad: I’m scared that I’m losing my son

Operation Hope: I don’t know what to do

Teaching my kids some things about life

Confessions of a Special Needs Dad: I’m scared that I’m losing my son


This week is going to be focused on Gavin once again.  We have to figure out what’s going on with him. Tonight we saw just how much worse he’s getting.

He managed to take the cap off of a bottle of water, while he was eating dinner.  However, he was unable to put the cap back on.  Lizze had to put it back on for him.  After dinner he fell while going up the stairs.

Thankfully he’s okay, a little banged up but otherwise okay. 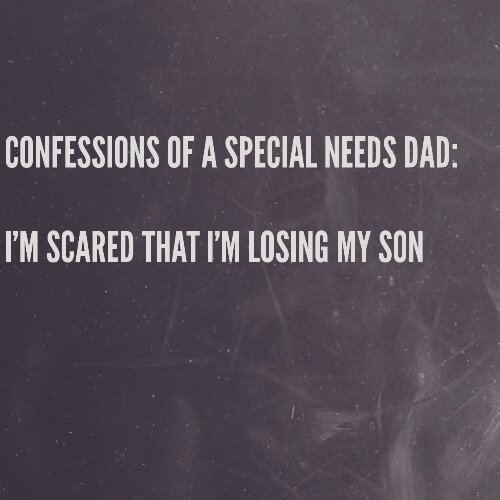 We learned something new last week.

I meant to tell you about this when it happened but never got around to it. While we were at orientation last Tuesday, Gavin shared something with us, that we were previously unaware of.

He’s afraid of the steps at school because he’s afraid he’s going to fall. I saw the look in his eyes as he approached the steps. It was one of true fear and I have no doubt that he’s being completely sincere. Truthfully, I don’t blame him because he’s falling on our steps at home and the ones at school are much higher.  I can understand why he would find them more frightening.

Almost all of his classes are on the 2nd floor this year.

He will have to take the steps to use the restroom,  visit the cafeteria and go to martial arts.

The school does have a working elevator, that I’m sure may be a possibility. This is something that we are going to have to discuss with the school and possibly have added to his IEP.  I can’t imagine they would take issue with him using the elevator.

Not that this is about me, because it isn’t, but I’m having a hard time with this whole thing.

I have no idea where this journey is going to take us. I have no idea how bad this is going to get. I don’t even know where to take him for help.  The trip to John’s Hopkins hasn’t happened yet. I think that this is something we are simply going to have to really, really push for.

We’re scheduled to see his autonomic specialist at the Cleveland Clinic in September and we can brainstorm.

I’ll be completely honest with you.  I’m scared. I don’t want to lose my son and that’s exactly what it feels like is happening right now. I feel sick to my stomach and I have tears in my eyes as I’m writing this.

I just don’t know what we are going to do.  The only thing I know for sure is that we will never give up. We will never leave one of our own behind.

I feel like that much of the time, it is a scary feeling.

Sorry to hear this Rob. I know it is maybe grasping a straw here but something as simple as impaired vision can cause problems with stairs. Rule out the simple if you haven’t already.

Lost_and_Tired I need 2 tell u re: stairs it is OCD fear & cbt is ur only hope. I know. Tx, Boston & Cali has best programs. Never stop.

Rob, I can’t offer any words to help you. I know how hard it can be, our daughter is 5 and is non verbal autistic and severely developmentally delayed, she has recently had to have surgery and pins put in her elbow after a fall on a bouncy castle. As a mother I felt helpless to aid her suffering if I got close she would hit and scream because she was in so much pain.  She still needs more surgery.  I have come to the conclusion that our children are the bravest and the most creative, however I also believe we should all wear super capes, that is the parents, because I think not only is it hard work, and sleepless nights, worry and everything else but we do it with all the love in our hearts, dont feel lost, because you are not, you are among us super parents who strive to be better every day, so our children can have a happy life.

AutismParentMag Lost_and_Tired This is today’s problem, not tomorrow’s. Gavin will grow out of this issue, as children do.

Go to http://www.NIH.gov and enter his symptoms and diagnoses and do a search for their research trials. My son is seen by the most kind and amazing people who listen to me and believe me when I tell them things. Every time we have gone, they paid for the trip and all of the procedures and special treatments. They provided me with food vouchers and a wonderful place to stay both inside and outside the clinical care building. It is in Bethesda, Maryland. Maybe more than one member of your family would find some help there? Best wishes. I met a family there one time who’s daughter was gradually losing her motor skills from something rare. It was metabolic, but that is all I know, Hope you guys can find some successful treatments!

I understand your feeling. A day at a time. This is all we can do.

My thoughts and prayers are with you all! 3