Slamming on the brakes and throwing it into reverse -

We never give up on our kids

Slamming on the brakes and throwing it into reverse

I went to grab Elliott at school and take him to Concorde Kids for occupational therapy.  I was on time, albeit a bit early. Go me!

The school called for Elliott and when he emerged from downstairs, he looked like someone had killed his puppy.  There were tears streaming down his face and he was quite upset.

I asked him what was wrong and he said they were just about to begin Martial Arts when they called him to leave.

That’s why he’s been so upset about going back to OT.

I wish he would have said something because I would have slammed on the brakes and addressed this right away.  Elliott is very verbal but at the same time, doesn’t reveal what’s bothering him. Instead, he tends to come up with other things to tell us, in order to hide his true feelings.

Anyways, I spoke with Elliott for a few minutes and he finally explained to me that they’re doing some really important things in Martial Arts and he’s afraid that he’ll end up not getting promoted.

There’s a promotion scheduled in the near future and Elliott will get to break a board and he wants to be ready.

How would you respond to that?

I’ll tell you what I did.  I told him that he was absolutely right.  Martial Arts is very important and I wanted him to go back, do his best and most importantly, have fun.

His little face lit up and he was so excited.

How could I argue with his logic?. Martial Arts is something that he was terrified of at first but has since grown to love it.  He’s learning some really important things and I completely support his wanting to not be pulled away from it.

I gave him a hug and he was off.

Elliott is only 7 years old but wise beyond his years and very intuitive.  He’s extremely sensitive and very often seems to carry the weight of the world on his little shoulders.

With any luck, his load will be just a little lighter now.

I wish he would open up more because there are a great many things that we could help him with, if he would only tell us.

For now, I feel happy that he’s happy and I’m pretty sure I did the right thing.  Don’t get me wrong, OT is important, even vital. However,  we will simply adjust the schedule to accommodate both.

Seems to me that everyone wins today.  🙂 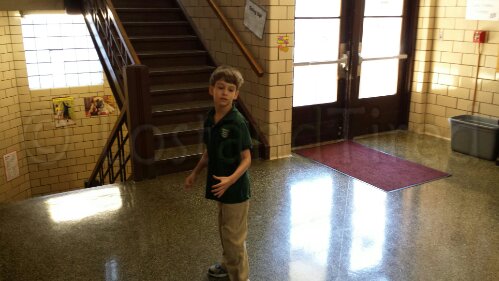 Way to go! I would have done the same 🙂

That’s awesome!! Glad for everyone! You did the right thing!

That’s great! Good for you Dad!!! Martial arts are fantastic. Our 8 year old is half way to his black belt in tae kwon do. He needed help with focus and discipline and I’m pleased to say, it’s helping a lot!!! 🙂 good luck!