We came under fire tonight

Dammit, this is so frustrating

Did my son play me for a fool?

I spoke with Gavin this morning about the email I had received from his teacher last night.  I went over what I had learned about his actions, this past Friday and Gavin acknowledged that it was true.

When he explained about his day on Friday, he left out all of the really interesting details.

Did he actually lie to us? That’s debatable because he had told us that he got frustrated and lost points as a result of that frustration. That was all true.

However, his story very much made him look like a victim and I believed him. 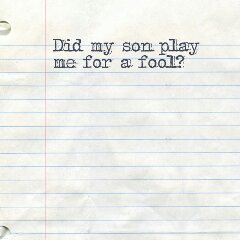 What were his intentions? Did he mean to mislead us or was his explanation true based on his perception of what happened?

I don’t know what to do at this point.

I’m angry with myself because I let my guard down with Gavin and it appears that he played us yet again.  I feel like an idiot for believing him and not even questioning his story………

I don’t enjoy any of this and I think we need to be aware of the fact that despite Gavin’s decline, he’s still very capable of playing us for fools.

Lost and Tired  rjones22 AutismAdventure misswendiminoregon Meaghan1985 rosie d chefaimee Sylvatine Dwayne Murphy dotdash Rob, i want you to know that when I said “I am with Gavin on this one. he didnt play you for a fool. put pride aside on this one”I meant it in the nicest way possible because you thought he was playing you for a fool, which i thought you meant that you felt foolish and that is where the pride comes in. meant no harm or bad feelings

rjones22 AutismAdventure misswendiminoregon Meaghan1985 rosie d chefaimee Sylvatine Dwayne Murphy dotdash thanks everyone.  Gavin is a really tricky case because he doesn’t operate in a way that many have seen before.  In the grand scheme of things, none of this really matters and it certainly isn’t a matter of pride.
I simply try to stay at least one step ahead of him and I thought we were beyond some of these behaviors and so I let my guard down.

rjones22 interesting point of view.  Gavin is a really unique case because he has so many complex things going in that it’s almost impossible to know for sure what’s going on with him at any given time.
I don’t mind them losing points but there needs to be an established standard for which points are removed.

chefaimee yup.  Every day is a clean slate and there are rewards for maintaining a certain number of points.

I really need to let this go as Gavin is not even my kid (I love that video, reminds me of my nephew with no rad). I am glad to hear that they start out with 28 points. if they give them that many that makes more sense and is not so detrimental to me (even though it isnt about me). that means they give them that many points because they KNOW they are going to lose some. So losing a few shouldnt be that big a deal. If he was losing half of his points maybe a regular parent (like you LOL) would then have an issue. Keep in mind it seems they expect some points lost. I still think yeah give them some points to lose (smart) but then give a chance to earn some. as you know I am about some positive encouragement and praise. catch them doing something good (like you do Rob). I dont know why this issue is hitting me so hard that i have to seem to say something. but i wish good stuff for you and your family

That makes perfect sense. A lot of readers seem to be indignant about the teachers taking away ‘Points that he earned’. I was curious, as most teachers will begin each day with a ‘clean slate’ so to speak; you have all your points for the day until you do something to lose them. I think that was a source of confusion.

I think of it like this.  If you have a disagreement with another adult, you tell it from your point of view.  How often do we acknowledge our wrongful part?  Maybe only after we are sharing with another person how we were wronged do we notice the part we may have had in it.  THat takes a lot of maturity to be able to acknowledge you were wrong.  Not a strong suit in a child.  So he may have omitted the harmful details, but that is pretty normal, I think.  I learned a long time ago, don’t ask my young children a question I didn’t know the answer to, and if I did know the answer, don’t ask a question so they have a chance to lie.  given the chance, most people will protect themselves.  Why wouldn’t children?

chefaimee here’s the thing.  I think you’re right.  He didn’t have a clue what algebra was until I explained it to him.  As far as him being dishonest goes, I truly have no idea.  He has a very long history of dishonesty and manipulation.  There’s the whole RAD thing.
I truly don’t have a clue.
As for your question about the points, I believe they start out with 28 points each day. Points can be taken away but as far as I know, they are not earned.  Does that make sense?
As always, thank you.  🙂

As you know, one of the hallmarks of autism, aspergers, and ADHD is perseveration. During that time in math class, Gavin was perseverating on finishing the problems and getting them right. The fact that he couldn’t get them right and was being stopped from trying to do so was unimaginable torture to him, and that’s why he became disruptive. My advice is to not focus on whether he intentionally lied to you; instead, work on helping him to not get stuck on things and to move on when it is necessary.

Honestly? It looked to me on the video that he didn’t have a clue about Algebra until you fed it to him. Not that you’re to blame at all, I know sometimes you have to ask him leading questions. I’m curious about the points system. Are these points that are ‘earned’, as the perception seems to be, or are they what you’re given to start the day with until you do something to merit one being taken away?

We do all perceive things differently.   Somehow we need to make sure our kids know that we’re on their “side” and have their backs while also making sure we have all the facts and really know what’s going on.  I personally always give my kids the benefit of the doubt until I know differently.   It’s really hard to know when I’m being manipulated by anyone. mu kids or others.

I am with Gavin on this one. he didnt play you for a fool. put pride aside on this one. we still don’t know if the teacher was listening well (or long enough) to gavin. I stil dont like taking points away, that is negative. he knew points were going to be taken away and he still couldnt get done what needed to be done without being upset. of course he knew points taken away was bad, then you were going to be upset and it got all on top of him. I am for the camera or recording what is happening. then you would know. He has all these issues that are life threatening, if GOD FORBID somthing happended to him tomorrow, what difference would it have mattered about the points taken away, or him trying to get out of trouble. one difference is that teacher took points away and she would have to live with not being able to take anymore away. another difference is that you were on your kids side and your other two kids would no you would be on their side always

Third option:  neither Gavin’s nor the teacher read the situation in its entirety.    It is entirely possible that it looks like situation A to Gavin because of XYZ about him (he has trouble revising or reprioritizing goals, he has less power than the teacher, he desperately wants to do well, etc.).  It looks like situation B to the teacher because of XYZ about him/her (expects compliance, has no trouble prioritizing goals, expects to run the show, needs to move the class along).  It seems possible that both of them missed pieces of it, in spite of being well-intentioned and trying hard.

Third option:  neither Gavin’s nor the teacher read the situation in its entirety.    It is entirely possible that it looks like situation A to Gavin because of XYZ about him (he has trouble revising or reprioritizing goals, he has less power than the teacher, he desperately wants to do well, etc.).  It looks like situation B to the teacher because of XYZ about him/her (expects compliance, has no trouble prioritizing goals, expects to run the show, needs to move the class along).  It seems possible that both of them missed pieces of it, in spite of being well-intentioned and trying hard.