Has your child ever asked you a question that just broke your heart?

We have an #Autism Family in Need – Please Read –

Has your child ever asked you a question that just broke your heart?


I decided that I wanted to do something special for the kids yesterday. It wasn’t glamorous but I took them to get to an ice cream cone at McDonald’s.  It was special to them and that’s all that matters.

As I was pulling up to the window to pay for the cones, out of nowhere, Emmett asks me,  “Daddy, how many more days until I die?”

Emmett’s 5 years old and I was completely unprepared for that kind of question.  To be completely honest, I was still reeling from learning about Emmett’s struggle to make friends, at his IEP meeting a few hours prior.

I wasn’t sure what to say.  My brain was racing at a thousand miles an second and so all I could think to say was “sweetheart, you have more days left than I can count.”

He pushed for more details but I was able to sorta redirect him with ice cream and that’s okay because I was pretty freaked out and trying not to show it.

Today, almost exactly 24 hours later, he hit me with another question that I was completely unprepared for.

This time we happen to be at Dr. Pattie’s office, waiting for her to call us back. Emmett looked at me and asked, “Daddy, if I was dead right now, would you miss me?” Jesus Christ, I swear this kid is trying to send me into an emotional breakdown.

It took everything I had to not burst into tears. 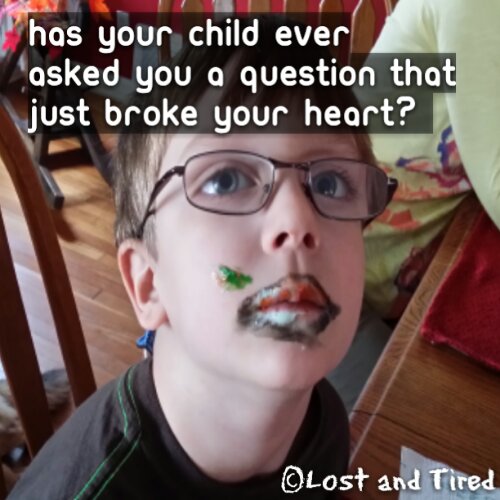 At this point I was physically shaking and I looked at Lizze but before she could say anything, Dr. Pattie came out the door.

This very quickly became the topic for today’s therapy session.
After I explained what had happened to Dr. Pattie, Lizze remembered that before we went for ice cream yesterday, Emmett had commented on a picture of Lizze’s Grandmother, who had passed away many years ago.  He was asking questions about his great grandmother and so Lizze talked with him about her for a little while.

Here I am panicking that he’s suicidal or something and it turns out that these questions were simply tied to the conversation he had with Lizze yesterday.  We just hadn’t put two and two together.  Thank God for Dr. Pattie and the fact that Lizze remembered that they had that conversation yesterday.

It’s amazing how easy it was for me to become so freaked out and heartbroken by the innocent questions of my 5 year old.  I mean, it’s good that I care so deeply but shit, I think I probably overreacted a little bit.

Has you child ever asked you a question that was crushing for you as a parent to hear?

My autistic son asks me often why I cannot fix him? I’m Mom. To him, I am God. He does not understand why I can’t take away his Autism.

When my son was 10 he said…”One day I want to get married. But Mama, who is ever going to want to marry somebody with a brain like mine?” I still cry when I think of it.

Yes My son asked me why is he so different from other kids? Broke my heart.

Thank you so much.

I think as a parent and more so of one with special needs who has attempted suicide being hyper vigilant is sometimes needed..sometimes we can back track and work out where the thoughts have come from and other times we are left shocked and in despair…I think it shows what a good parent you are. I do know some who like to trivialise questions their children have…don’t be silly or stupid etc…

rjones22 VoteRivette Amy A JeroldAdamDavis thanks.  We haven’t heard any further talk of death or had to answer anymore questions on the subject.  I’m grateful for that and I think I would honestly rather have the sex talk than have to answer some of these other questions.

well my father died when my twins were three.
one day my ASD boy asked me “why did pop pop have to die, we barely got to know him”
i was still struggling to find reason to tell myself, i mean that was the WORST even t of my life, losing my Dad. but suddenly i saw tears springing up in my boys eyes. and all i wanted to do was cry.
i hugged him and told him that even though you dont remember him really well, pop pop had a long long life and he got sick. his heart was old and tired and he’s gone but we can talk about him and remember him and carry him in our hearts. Pop pop loved you and sis very much.
my son has no grasp of time, so when he asked how long before HE gets old and dies, i told him a long long time, maybe he can live to be a 100. (he knows that is a very big number)
for about 2 weeks, he would bring this up. “why was pop pop sick, and why did his heart stop. was it like this. BUMP BUMP BUMP BUMP BUMP BUMP……………” (with a slowing pace in his bump sounds)
he tends to fixate and even though i tried my best to keep composure, it broke my heart and i was lost for words each time.
after 8 or 9 times explaining it, i had to be firm, i really had to sit him face to face and tell him we are all safe, and although Pop Pop is gone, we are still here. it might hurt, but we loved him very much and he loved us. and our hearts dont forget that. it is okay to be sad and it is okay to cry, but we dont have to wonder why it happened. it just did. and if we can live a long time and have a great life like Pop Pop, then that is a good thing. it was really hard, but when i was done, i had to go cry… so i told him “and i dont want to talk about it anymore tonight” it was truly heart breaking. my Dad was my everything!!!!!

Yes. When my kid got out of the hospital for his bone marrow transplant and we had to go to the hospital every day for 30 days then every other day etc., we would of course see other kids. Not to be callous but a lot of the other kids died. on the day my son had his transplant 5 out of 7 eventually passed away fairly quickly. So here is the terrible question my kid asked and he asked every day we went to “clinic” that i had to go to the nurse and ask “Who is left?”. To this day I am horrified to think about it. he knew that if i stayed at the nurses station to long then the answer was not good (as I was trying to pull myself together). This went on for two years. Even though it was not all about me, after our appt, I had to go to work (single mother)  and had to leave him with a sitter. Can you imagine going to sell something to someone for work after that experience every day. Can you imagine him getting that kind of information every single day of who died? this went on from when he was 11 to 13. he also realized or “assumed” that if someone was in or was about to go into intensive care that they were going to die (they usually did-just because of the nature of cancer). He also realized really early that if someone mentioned Disney World trip – that they were going to die for sure.

I think your answer was perfect.   My son has seen so much death in the past year, I’ve been surprised he hasn’t asked me questions like that.  The hardest question he’s asked me was wanting to know why he doesn’t have a sibling, and I had to remind him that his brother died at birth and I can’t give him another one.

Rarely do I read anything that makes me laugh and cry simultaneously. You have achieved this. Well done!

You have an incredible blog. God bless. Wow. That was intense.