#Autism and the hypocrisy within our community

I tried to warn the school about Gavin


Gavin had a massively violent tantrum tonight.  We caught him lying to us and his teachers. Essentially, Gavin was exploiting a situation at school, in order to get out of doing his homework.

Basically, he would do some of his Math homework at home, tell us it was done and then go to school the next day, tell his teachers that he couldn’t do it and that he needed help.

This of course isn’t true.

What he was doing was manipulating everyone into essentially doing the work for him. They didn’t actually do it for him but they held his hand and walked him through it.  This ensured that he got the right answers and wouldn’t have to redo it.

If he had to redo any of the problems, it would cut into his obsessive recreational reading time.

I’m going to have to meet with his teachers and bring them up to speed. He’s also got us really confused about something that’s going on in class, causing him to lose points. He’s playing the victim but nothing he has said makes a lick of sense.

Anyway, when we caught him this evening trying to pull one over on us, we dug around a bit and figured out what was going on.

As a result, we informed him that he’s his tablet and recreational reading privileges are suspended until further notice.  We need to get to the bottom of this and figure out what to do. His education has to come first and the lying has to stop.

I don’t think I’ve ever envisioned myself having to remove reading as a consequence.

The moment he heard that he was losing those things until we get this figured out, he completely lost it.  He had the worst tantrum he’s had since he moved back home, earlier this year.

This was a tantrum and not a meltdown, because he was pissed off that we were holding him accountable for his having lied to us.  He didn’t care that he had lied, only that he got caught.
I really thought we had put most of this behind us and we were trusting him again.  This is totally a Reactive Attachment thing and now I’m left wondering what else we’ve missed.

The tantrum was very, very violent and self-injurious.  He was actually hitting himself with a chair, punching himself in the face, smashing his head into his knees and biting himself.  If you’re new to this blog and our story, you’re gonna just have to accept that this was a tantrum, meant to manipulate us.  Gavin has some very, very serious mental health issues and his issues go much, much deeper than just Autism.

I’ll be totally honest with you here. I was absolutely caught off guard.

I was beginning to trust Gavin again.  After everything he’s done, it wasn’t easy to do that. Now I feel like an idiot because when he told us his homework was done, I believed him.  Every time we’d check in with his teachers, they would tell us he’s doing great.

Gavin was playing on their willingness to help him.  It’s really hard to believe what Gavin’s capable of, especially if you have entered experienced it for the hand.  RAD kids can be quite gifted in the art of manipulation and deception. Gavin’s the poster child for this.  It’s difficult for us to get his teachers to understand that Gavin is capable of doing but we’re gonna have to try.

I fucking hate this.  I hate not being able to trust my son.

Looks like we haven’t put this shit behind us after all and if there was any question as to whether or not he was still capable of this type of behavior, I say that question has been answered.

Below is a picture of what Gavin did to his knee, with his teeth, through his pants.

Elliott and Emmett were completely terrified by Gavin’s actions tonight.  Lizze stayed upstairs with them, after we heard them crying.

You have to understand how violent his tantrums are. He literally shook the entire house and there was no way to escape the screaming. Emmett also heard Gavin scream that Bella was a stupid dog and he was not happy to hear that.

As soon Gavin realized that we weren’t budging off the punishment, he simply stopped, like nothing had ever happened.

I wouldn’t wish this on anyone. 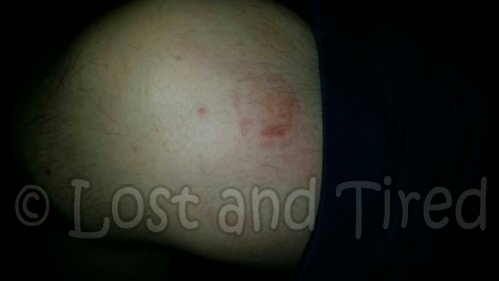 i am so sorry for the whole family having to go thru this. keep in mind as much as we dont like it one bit, kids lie to get what they want, heck adults do it. of course we have to teach them. keep in mind hormones are probably involved. I was wondering what grade level he is in math. Being realistic how much math does he need or is he going to need? wtih his health so fragile, I might just let them handle math at school if it isnt a problem for them (or even if it is). remeber too, that his reading and using the tablet helps you keep your sanity with him being busy with something that is constructive. you know i dont like the whole points system but it is what it is and you are right to find out why he is losing points. To me as long as he is not hurting someone or disturbing the class to much I would be easier on those points. It is a special school so they are prepared for whatever he is doing. Set yourself an acceptabel level of points he can lose (in your mind) and let the rest go. remember too, that we can go from zero to 100 being angry sometimes cause things hit us the wrong way and then go from 100 to zero just as quick because we can. we arnt manipulating anyone, we just end up calming down. At least he quit. I know you have the extra issue with the kids being upset as well. try not to think this is going to happen every day (even though I would as it would be normal to think with his history) as it hasnt happended everyday or in a while. With his memory problems, if you take these things away for a week for example, will he remember what he did? I have very academically off the chart genius kids but when anthony was little and so sick for so long, school work could go screw itself, he would eventually be educated. unfortunaely even though my sick kid has an academic scholarship waiting on him his health is too bad to use it yet. With all my 2 cents in, you are the parent and i am sure you will do what you think is best which is all you can do.

Use If / Then conditions to get Gavin to do things. Tell him finish math homework, then he can use the tablet for reading time. Taking the item away altogether is punishing.

eeyorekitty88 Meaghan1985 Sylvatine Dwayne Murphy thanks everybody.  The thing that always throws me off is that with all the cognitive regression, I feel like he’s not capable of this type of planned out manipulation.  Dr. Pattie is forever telling me not to let my guard down and every time I do. She’s proven right, every time.
Gavin has meltdowns and tantrums.  The meltdowns happen when overwhelmed or frustrated.  You can see in his eyes that he has little control over these occurrences.
When something happens and Gavin is held accountable for his actions or he’s simply caught doing something he shouldn’t be doing, what results is a tantrum.  When he does this, he’s essentially trying to manipulate us through his behavior.  He figures that if he hurts himself, screams or get violent and scares his brothers, we will back off of the punishment.  In this case, he wanted his tablet and books back.
As soon as he realizes that he can’t manipulate us, he simply stops.  It’s literally like flipping a switch.  It’s really kinda creepy.
Dwayne Murphy Gavin’s been really into the Percy Jackson books. I’m thrilled that he enjoys reading but he’s becoming hyper focused on reading and it’s at the expense of his education.  He’s lying and manipulating people to get more time to read.

Right  now we just took it all away until we figure out exactly what’s going on and make sure that Lizze, myself and Gavin’s teachers are all on the same page. Plus, he has to know that there are consequences for his choices.  That’s the way the world works. :-

I wish I had some consoling words of wisdom for you.  All I can do is pray and that never seems like enough to me.  Bethany has violent meltdowns on occasion, but she’s not capable of this level of manipulation.  I do know what it’s like to love your child while also hating the way they act and worrying about the physical safety and emotional well being of all family members.  My heart goes out to all of you

Wow – not good.  My son used to have extremely violent outbursts that I NEVER thought would end (he doesn’t have RAD, though) and I NEVER saw a light at the end of the tunnel. Now, he is 17 and the outbursts have lessened dramatically.  He used to hit, bite, punch and spit at me and I never thought it would end.  The part about him hitting me or touching me violently at all did end.  Thankfully.  Very thankfully as I’m a single mother and have no back-up help in the house.  Now, he just punches the walls or breaks things and this too, is lessening.  I hope this happens for you, too.  I know how you feel and it sucks.

What type of stuff does Gavin usually read?