Baking with my #Autistic son is an adventure

Emmett’s going to be so disappointed by this

For those of you new to our story, Emmett used to be extremely aggressive.

When I say extremely aggressive, I mean Lizze was physically assaulted multiple times a day. Emmett would hit, bite, kick and scratch anyone when he was set off.

Elliott was a frequent victim of these attacks as well. 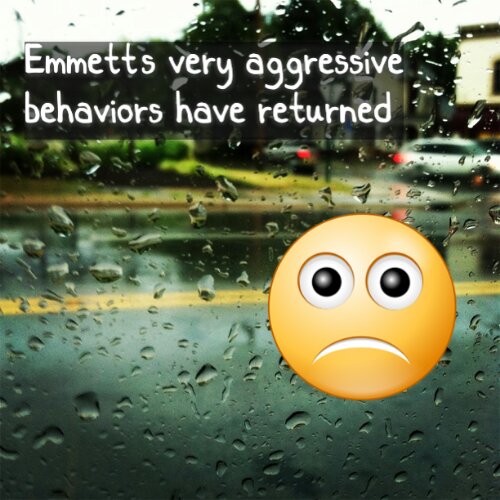 I can’t tell you how many things were destroyed during these  aggressive outbursts. Personally, I lost both an Xbox 360 and a PS3.  He took a chunk out of our old TV throwing things at it.

These were all material things and don’t really matter but it still sucks.

About 2-ish years ago, the behavior sorta subsided.

We’ve always attributed that to him gaining his ability to speak. Not being able to speak and/or express oneself, is something I can’t even imagine.

Anyway, these behaviors have recently returned and both Lizze and Elliott are the primary targets.  Tonight was a really bad night for Emmett.  I don’t even remember what he was upset about but he just lost it. Oh wait.. Lizze caught him bullying Elliott and when she stopped him, he freaked out.
Lizze was essentially attacked and Emmett hit and kicked her.
I got him pulled aside, tried to calm him down and was eventually successful but he was really frustrated. I wish I knew what was going on because I would love to help him.

If there is any small consolation it would be that this behavior is not happening at school.

While that’s a big positive, it’s little comfort to Elliott and Lizze, when they are getting hurt.

Emmett is an amazing kid and something is causing this but I just have no idea what it is.  He’s really stressed out and very easily frustrated right now.

Maybe the stress in the house is getting to him…….

Huh. You are mentioning this behavior just a month (or two?) after Gavin started manipulating and throwing tantrums again. Did Emmett’s aggressiveness subside around the time Gavin moved out temporarily? If so, it may be the case that Gavin’s tantrums lead to Emmett’s aggressiveness. Or something causes both of them to go off? Just food for thought. Best wishes.

Could he be acting out for attention?  I know that sometimes kids will act out and do things they aren’t supposed to do for attention even if it is for negative attention.  Just a thought.  Or maybe something else is bugging him and he doesn’t know how to communicate his frustrations so instead he acts out.

Do you think it might be necessary to approach Emmett’s behavioral problems in the same way that you do Gavin’s? The outburst with Elliott and Lizzie reminds me a lot of Gavin’s troubles. This is just an observation: If Gavin had done some of things that both Emmett and Elliot have, he’d be having oatmeal for a year.

I don’t know why Facebook keeps importing the wrong pictures. 🙁