These meltdowns are exhausting for everyone

Emmett’s going to be so disappointed by this

These meltdowns are exhausting for everyone


Emmett had a massive meltdown this morning and hurt Lizze again. He was told to stop messing with Elliott and he lost it.  He hit and kicked Lizze.  He threw things, as well as hit and kick inanimate objects.

The whole thing lasted about 30 minutes.

Having said this, I wanted to address the differences between Emmett doing this and the tantrums that Gavin has. 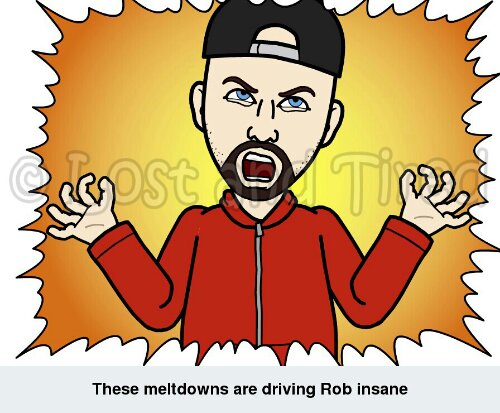 For starters, Emmett’s 5 years old and Gavin’s almost 14. While Gavin is significantly developmentally delayed, many of the times that Gavin has tantrums, they are willful acts.  I know that a lot of people can’t wrap their brains around that but this is a fact.

Gavin has the ability to turn these tantrums on and off as it suites him. Gavin does have meltdowns as well but they only happen as a result of frustration and there is a visible difference between the two.

Emmett on the other hand, does not have the ability to turn these on and off at will.

Even if we offer to give Emmett what he wants, he still can’t stop.  You can see it in his eyes that he has no control over this behavior, the same way you can see it in Gavin’s eyes when he’s having an actual meltdown.

It’s not been a good morning and the tone for the rest of the day is set.

Ok. . .now I see the difference between Emmett ‘s and Gavin’s episodes.

Lost and Tired  julh oh no, when he’s in the thick of it he has no ability to reason at all, it’d be something to teach him when he’s calm – if that happens at the moment 😉

julh that’s definitely something I can try.  Having said that, when he’s going, I don’t think he even he even hears us.  🙂 Thanks Julia,  🙂

Rob would it help if you pointed out how much he’s scaring Bella? Or maybe look at writing a little story/comic strip about how everyone feels when he screams/hits etc.

Shawn Snowdon hang in there.

I’m right there with you. we have been in meltdown mode all morning. 🙁