This morning has been a complete disaster


I’m so worried about Elliott.  He’s not eating much of anything,  He didn’t eat his lunch again and he didn’t eat dinner tonight again.  I made three different things, there was something wrong with everything I made. 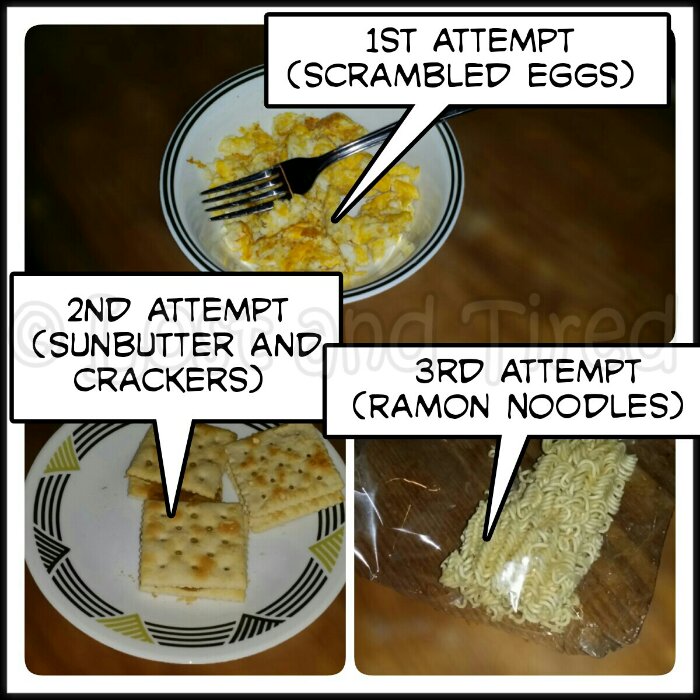 However, tonight they tasted funny to him and he wouldn’t eat them.

He asked if I would are him some Sunbutter (soy butter) and Saltine cracker sandwiches.  I made him 4 sandwiches, thinking I would just make more if he needed them.  As it turns out, he only ate one before deciding that they tasted funny as well.

Unfortunately, the Ramon Noodles tasted rotten, according to Elliott and he just decided to not eat.  🙁

I tried, I really did.  This has been something that has progressively gotten worse over time.  It began when he was diagnosed with an allergy to tree nuts, almonds in particular.

Over the last couple of weeks, things have gotten worse and I don’t know what’s going on with him.  We taken his ADHD medication into account because that can kill his appetite, but that hasn’t really ever been much of a problem and this began before his medication was started.

This happens every single day and we’ve gone through our entire (recently reduced) grocery budget already this month because Elliott and Emmett’s food proclivities.  It’s not their fault but we have gone through so much food, trying to get hem both to eat and it just never ends until we literally run out and that’s about where we are now.

Elliott has always been a very picky eater and that stems for his many sensory processing related challenges. However, since the whole tree nut allergy came to light and his options were significantly reduced, it’s been almost impossible to get him to eat, not to mention really expensive.

We’ve been avoiding getting him in to the pediatrician because I know how traumatizing that experience is for him and I know that it would likely require blood work.

We’ve been watching his weight and just trying to accommodate him in any way possible.  He’s even turning down McDonald’s when it’s offered.

He’s very likely depressed but he’s had a negative reaction to the type of medication he needs to be on for it, so our options are limited. He’s in counseling at least once a week and that helps.  He’s doing amazing in school as well.

Dr. Pattie says that this could be all about control for him right now. He feels like, and for good reason, that his life is out of his control.  The most basic control someone has over their own life, is eating.  This isn’t a healthy way of coping and we have to be careful that this doesn’t evolve into some kind of eating disorder down the road.

There are so many things that have me worried in general right now.  There isn’t a single cell in my body that isn’t worried about one of the kids or even Lizze for that matter.

This is such a winless situation because to help one person, I have to put another on the back burner.  No matter what I do, someone pays a price.

If I simply prioritize by need, than just about everything would have to go to Gavin.  If I prioritize  you a combination of need and who would benefit the most, Gavin wouldn’t make the cut because nothing we’ve ever done for Gavin has had any lasting impact on him.

It’s pushing 2am right now and I’m writing this because I’m so stressed out over all of this stuff that I can’t sleep.

It just never ends and I don’t know what to do anymore. I’m feeling worried, helpless, demoralized, frustrated and overwhelmed tonight.  🙁

I was thinking it could be anxiety based – I have anxiety and the worse I feel with it the more I find myself afraid of food, especially chicken. And usually I find that I’ve had one thing that tasted ‘wrong’ or had the wrong texture for me (like the eggs probably would), my throat will feel closed up and I can’t bring myself to eat anything more for quite a long time.

My 7 year old son has struggled with eating issues and has actually been diagnosed as having an eating disorder in combination with his Autism.  We took him to a behavioral psyhologist who specializes in eating issues in kids at the Seattle Children’s Autism Center.  We did a few things:  We set up a token economy.  You can use puffs, beads, rocks, whatever you have around the house.  We used glass rocks.  Jack got 2 power beads when he ate a set amount of food.  He also earned extra beads for trying new foods, eating more than the determined amount, etc.  I then set up a “store” for the things he could “buy” with his beads.  It ranged from a few beads for something small, all of the way up to 50 beads for a new video game.  We also sent a letter to his school outlining the problem and had it so that he either finished his lunch or had extra snacks in class in the afternoon.  Jack’s teacher was really encouraging and for every pound he gained, the class would get a prize.  We never talked about fat or skinny, we just talked about food as being fuel for your body, to help it grow big and strong.  I agree with Dr. Patty that Emmet may be trying to control his world.  Maybe having control over a token economy will help.  Email me at heupelmom@gmail.com if you want to chat about this more.

maybe he has sinus drainage that makes everything taste like crap.wouldnt it be great if it was that simple.

Brett Stevens Every one of these meals were his choice. These are what he’s asking me for. Sometimes he even helps to make it. Doesn’t make a difference 🙁 I’m really glad that you have found success with this. 🙂

My sons have done better when given some control, we “plan” the meals for the week together and they each get to pick what they want and put it on the calendar. They also then help prepare it when they choose it. My one son is very picky, my other son very control based food issues. It has helped some.

I know when my food or environmental allergies get out of whack, nothing tastes good and I lose my appetite too.  And worst of all, sometimes I crave what I can’t have (Wheat and chocolate) and that creates a nice mental obsession for those saltine crackers dipped in chocolate (for example) and no other food will take their place.
Just taking a guess that maybe this could be what he’s experiencing and he just doesn’t have the words to say it.  Plus…no one will ever tell you that it is normal to crave the things that will make you sick.  Especially if you have eaten that food in the past and like the taste.
I hope you all can find a solution.  Hang in there.  We’re all praying and hoping for you all.

@Katy Murray I was thinking the same thing you were.  Maybe his taste buds are off.  He will eat when he is hungry.  You might try having him gargle with some warm salt water and offer him some dry toast and soup.  😉

Believe me, I worry about you more than I worry about anyone else in your family.  How are things going with Lizze?  Any updates on the upright xray or an appointment with a Neurosurgeon who specializes in Ehlers-Danlos or spine deformities?  Get her well FIRST and then the two of you can work as a team.  At the pace you’re going at, you’re GOING to burn out.  Just like I have.  And you have waaaaay more on your plate than I do.

Where did your general donate button go?  Donate to server costs seems to be the only button there now…

My heart aches for you.  I understand somewhat the feelings you are describing.  4:30 AM is usually my time for waking to that immobilizing wave of guilt, fear, and anxiety.  Goodness knows you’ve got enough on your plate so (attempt at humor here) you must get it earlier.
One idea:  maybe you should call the pediatrician even if you decide not to bring Elliott in.  You could keep him/her up to date on what is going on (this amount of non-eating is worrisome) and also — could they prescribe a nutrition drink over the phone?  Then you wouldn’t have to worry about nutrients and calories at least, it might be covered by insurance, and if Elliott controlled the stash of drink and which flavor he drank maybe that would soothe the control issues?  Just a thought.  I’m sending some more tangible help as well.  Happy Thanksgiving to you all.

The first thing that came to mind for me is I wonder if he has lost some of his sense of taste? With any kind of allergy or cold, your smell gets compromised and therefore taste. Also, if he has any kind of nausea or maybe reflux, do you think that is affecting his desire to eat? I deal with a lot of nausea and I rarely feel any hunger, in fact, I make myself eat but can easily go all day without food. But I really like where you were going with the control thing, also. I wonder if he had more choices or got to build more of the food, if that would help him eat? I used to throw out ranch, ketchup, and BBQ when there was something you could dip, just so my little ones had choices. They didn’t choose the chicken nuggets, but they chose their sauce. I know he has a ton of allergies and his options are really limited, but you might even get him to eat more WHILE the food is being prepared, like licking the spoon of the soybutter before it gets rinsed, or snacking on a cracker while he makes his own sunbutter sandwich. Also, one of the things that has helped my son was stronger tastes…he loves salty/taco seasoning/ Tony Chachere’s/citrus flavors/vinegar from pickles. His first ever BITE of anything was a nacho cheese Dorito after he had licked the seasoning. Before that, he would only eat soft things off a spoon. Hope some of these ideas helped. You are an outstanding dad! And you bring up great points that are interesting to think about. Obviously my perspective is different because my son has MR and other disabilities in addition to the autism…he is mentally a toddler but 15 years old. The texture and taste issues sure aren’t unique to his syndrome, lol!