Even if it means going toe to toe with the school -

Even if it means going toe to toe with the school

Yesterday, Elliott confided in Lizze about why he hasn’t been wanting to go to school.  Turns out he’s extremely anxious about the school Christmas show that the students put on for all the parents.

I honestly don’t know why I forgot about this because it’s been a problem every year since he first started at Summit Academy.

Elliott has generalized anxiety disorder and that’s one of his biggest challenges in life right now. His anxiety is literally paralyzing for him. For those of you that are long time readers of this blog, you are already aware of this.

He doesn’t want anything to do with the getting up in front of a huge room full of people and singing. Honestly, how many grownups would be comfortable doing that? 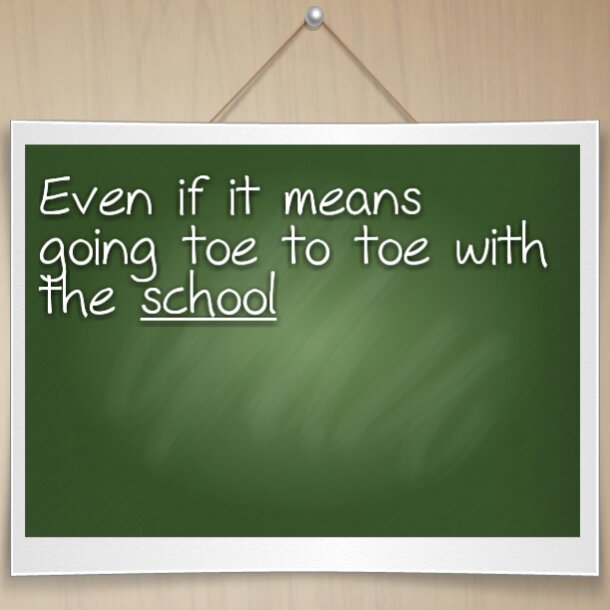 The school has embraced this approach but this year Elliott was told by both of his teachers that he doesn’t have a choice. That has totally sent him over the edge.

Elliott’s not one to talk about his feelings so he never brought this up to us. Instead, he was acting out because he didn’t know what else to do.

After he broke down and told Lizze what was upsetting him, we told him not to worry about it because the school already knows that this is something he’s scared of. We encouraged him to let his teachers know how he feels and if there are any problems, we will step in.

Unfortunately,  Elliott approached his teachers and according to him, they again said that he had no choice in the matter.

After hearing this, I informed Elliott that whether or not he has a choice in the matter is up to his Mommy and Daddy and no one else. With that in mind I went to the school early yesterday to pay a visit to my friends in the office. I explained what was going in and my friends there assured me that they will never make a child that is so terrified of getting in front of people and performing, get up and perform.

I figured this was a misunderstanding as Elliott has new teachers this year.

The truth is, I don’t want Elliott to let fear determine what he does and doesn’t do. Having said that, we made Elliott try the show, his first year there. It was a horrible experience for him and so we decided that going forward, he would practice with his class, we would encourage him to keep trying but we would not force him to take part in the Christmas program.

I think that he has the rest of his life to overcome obstacles. This is something that won’t even register as a blip on the radar of the big picture.

We’ll work on helping with through these types of situations as life goes on but for right now, this is what’s going to happen.

I have to say that it does feel good to be able to remove this burden of fear and anxiety from such a young soul. We’ll keep working with him on overcoming this fear but for right now, I know this is the best approach to ensure his emotional well being.

Elliott’s school is amazing but let it be said, I will always stand up for my boys, even if it means going toe to toe with the people I admire and respect.  My kids will always come first.

While you sound like you may have been prepared to go “toe to toe”, it seems like the school was on the same page as you, and your son misunderstood.

OutrunningTheStorm just posted a beautiful blog post [http://outrunningthestorm.wordpress.com/2013/12/03/safe-2/] that I felt was relevant to this.  As you said, allowing your son to avoid doing something like the school play isn’t a big deal in the long run, and he does have the rest of his life to overcome obstacles.  If that’s what it takes to help him get through the day and cope with his anxiety in life, then that’s always going to have to be a priority.  Forcing him to be in the play to help him overcome the obstacles of his anxiety is like throwing someone into the pool to help them learn to swim: yes, it works, but at what cost?

You are doing the right thing! When I was a kid, I was the same way. I always faked being sick when I was due to give a oral report, or I would just refuse and take the “0”. I’m sure I would be diagnosed as having GAD if I were growing up now as opposed to 40 yrs ago! I didn’t join teams, go to dances/proms/parties ect. Everyone thought I was just “shy”! It impeded me going to college ect. I wish I would have gotten help. My older son had similar issues, so I was able to intervene. I always told him I was over the teachers & principle, I was the MOM!!! Btw, with age, gentle pushing forward, my son is 23 in Grad school (for marital/family therapy) & is doing GREAT. He lives on his own, has a job & a g/f. But slowly pushing and him having some control and being able to talk honestly ab his feelings is what got him there! You would never know this was the same kid growing up!!! I hope this gives some hope!!!

Amy Linder you sorta just have to follow your heart. If something feels wrong, it probably is. I don’t thrive on confronting people but when it comes to my kids, I’m very diplomatic but forceful. 🙂

I find that the hardest thing to do. I admire and respect those “going to bat” for my son at school, i find it hard to make demands, even when i need to. They convince me that “its not a big deal”, i go home and want to beat my head on the wall.

I hope it works out all right for you son. Too late, I learned our local school system was good EXCEPT for the way it dealt with special needs students. (In other words, state report card in that area is D.) It has left me permanently soured on our schools here. I actually vote against school levies a lot now, since I realize that our local schools aren’t doing anything about their lack of helping special needs students.