Gavin had a really bad day at school today -

I made a horrible mistake tonight

What NOT to say to an #Autism parent

Gavin had a really bad day at school today

Before Gavin got into the van after school, he said “Dad, I had kind of a rough day.”  Let me start out by saying that I’m really proud of him for bringing this to my attention.  In all honesty, he could have just said he’d had a great day and I likely wouldn’t have been the wiser.

However, that’s were the silver lining stops and I had to put my boots on because the shit was getting deep.

From that point on, nearly everything that came out of his mouth was a lie.  He told me that he got frustrated in Math class because he ended up doing the wrong problems on the computer.

He was doing the wrong problems because he wasn’t following the directions.  O_o

He began spinning what happened to make himself look like the victim.  He stated that his teachers should have told him that he was doing the wrong problems.  He went on and on about how it wasn’t his fault. 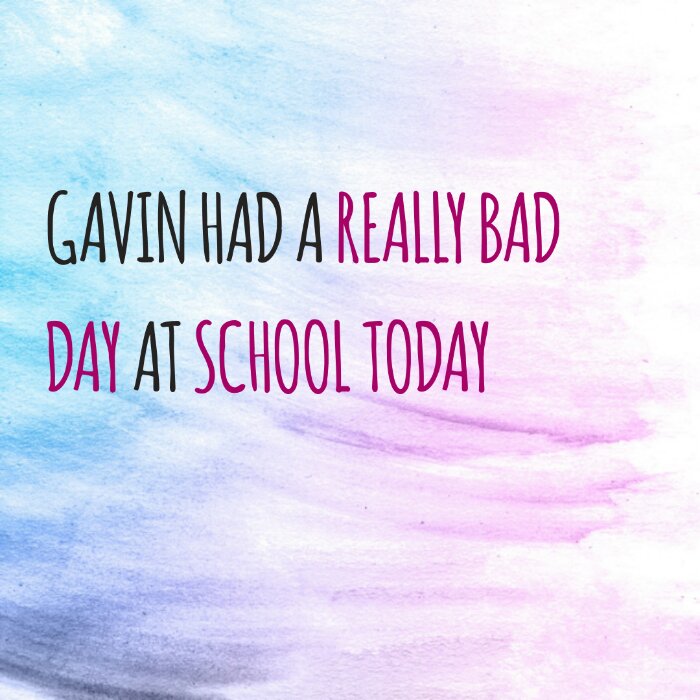 It was like a train wreck because I hadn’t intended on having this discussion with him in front of the boys but he wouldn’t stop talking.  It got to the point where Elliott and Emmett were pointing out the inconsistencies in his story.  I then told them to stay out of it as it wasn’t their concern and I told Gavin to keep his mouth closed until we get home.

When we got home, we sent the boys to their room with a snack and sat down to try and better understand what happened today.

What Gavin began telling Lizze was completely different than what he was telling me in the car. Was he thinking I wouldn’t remember what he’d already told me? We’re not talking a few insignificant details were different, we’re talking the entire story had changed.  For that matter, it changed several more times before he was done.

After something like 45 minutes of his ramblings, this is what we were able to piece together.

Gavin wasn’t doing what his teachers had told him to do.  When one of his friends pointed out that he was doing the wrong problems, Gavin got pissed.  He became very agitated and disruptive, blaming everyone but himself.  His teachers sent him to get a drink, something that usually helps to calm him down.  However, it didn’t help this time.

Gavin was freaking out in the hallway and started hitting himself, as he walked back and forth.

As he was doing this, he was disturbing several classrooms of children trying to learn.  By the time he was finished with  his tantrum, his class had moved on and he had to take a zero on the work for not even having started it.

When Gavin first got into the car, his story was that he got a

little frustrated but he got himself under control

.  While that may be true in a sense, he left out everything else. Every time we would question what he was telling us, he would say, “I forgot” or “I didn’t say that”.
This was a very painful experience for many reasons.

It never feels good to have your child lie to you and Gavin does it almost compulsively. They’re actually using the words compulsive liar in therapy now.  🙁

The fact that no matter what we do or say, we can’t help him. That really feels absolutely awful.

Lizze and I decided that we are just going to let the school deal with what happens at school and because we have such a good relationship with them, I know they will come to us if they need us involved.  Until then, it’s best for everyone if we keep tabs on what’s going on but allow the school to handle it.

Personally, I want to see some accountability.  Sometimes I feel like the standards are to low but hey, I don’t make the rules.  He’s at a great school.  He’s safe, treated with respect and given an opportunity to learn.

Right now, it’s kinda like he’s choosing not to take advantage of this and I just don’t understand why.

Is it possible that Gavin might actually believe that he is telling the truth even as he keeps changing his story? That could be true because how could he expect you to believe the story that he told Lizzie after he had just finished telling you a completely different one. This may have to do with Gavin’s psychotic breaks from reality.

I have found that making a video of the child in question (ie during the “confession”), always helps. Admitedly, My children do not have the multiple diagnoses that your has! Another thing that tends to work well here (I am postING this more for your followers) is a written contract of expected behavior and consequences that each child has signed – it stays on the fridge. We also always follow through that there will be NO consequence if the child tells the truth the first time. It is very difficult and upsetting to know that you have a child or children who repeatedly lies!