My son with primary #immunodeficiency is sick again... #MakingMeNervous -

Please Pray for Gavin: We may have a serious problem

My son with primary #immunodeficiency is sick again… #MakingMeNervous

Thank you for all the well wishes.  I wanted to update everyone as to how Gavin’s doing at the moment.

The boys got home a little while ago.  Gavin looked much better than I expected him to look.  I was planning for and expecting the worst.

It was quite clear that he wasn’t feeling well as I helped him into the house.  He went straight upstairs and to bed.  After the other boys got settled in, I went to check on Gavin. He was pretty miserable but again, he looked pretty good.

We gave him a Zofran and an Ativan, along with some water and a puke bucket. 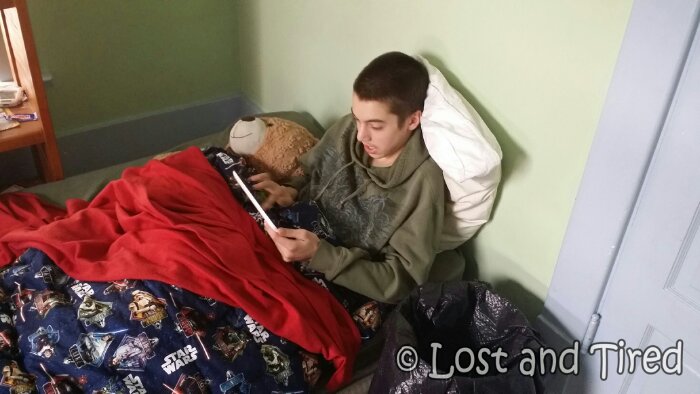 The Zofran is for nausea and vomiting and the Ativan is for trying to head off an Autonomic Crisis. He gets the Zofran as part of his IVIG Infusion therapy, to reduce nausea, resulting from the procedure.

I helped Gavin get comfortable and got him his tablet, hoping that it would be a distraction for him until he could fall asleep.
At the time of this posting, he’s feeling much better and doesn’t appear to be showing signs of any Autonomic related complications.  Hopefully, the Ativan will help prevent any Autonomic problems.  The Zofran has reduced the nausea enough that he’s slipping water.

He’s just chilling in his bed and playing a game on his tablet.

The big concern right now is fluids.  He needs to not only in get them but he also needs to keep them down.  Obviously, we’re going to have to increase his fluid intake today and with any luck, this will pass without consequence.

That being said, this is the second time he’s been sick since starting the IVIG Infusions, almost 3 years ago now. He still hasn’t gotten over the cough and now this.

Please keep him in your thoughts and prayers.  🙂

BarbaraDuke I send my prayers and support.