#Soapbox: Show some respect, get off your ass and say the pledge of allegiance

Thank you for the prayers: Here’s what happened this morning

#Soapbox: Show some respect, get off your ass and say the pledge of allegiance


I make it a habit not to tell people what to do.  However, on occasion I’ve been known to drag out my soapbox, climb up on and bitch about something that really bothers me.

This is one of those times.

I experienced something the other day while at a school function for my kids.  My kids did a Martial Arts Demo in which they demonstrated what they were learning in the Therapeutic Martial Arts (see video montage below).

What I witnessed at the beginning of the program was really sad and honestly upsetting.

Before each demo, the kids bowed to show respect for their parents and teachers.  Sensei then asked everyone to please stand as we say the pledge of allegiance.

There were people there that actually wouldn’t stand up and say the pledge.  They wouldn’t even stand up.

I’m sorry but why can’t we all say the pledge?

We were in a room full of kids that are taking these things very seriously and you can’t even play along.

I realize that not everyone believes the same thing and we all have a different opinion but as an United States citizen, how could you not be bothered to say the pledge of allegiance to the country that affords you the right to refuse to say the pledge in the first place?

So many people have died to ensure that you and I are free.  I feel like it’s disrespectful to refuse to do this.  Maybe I’m wrong but that’s just the way I feel.

I’ll be honest with you. I’m not a supporter of the current administration, but I respect the office. 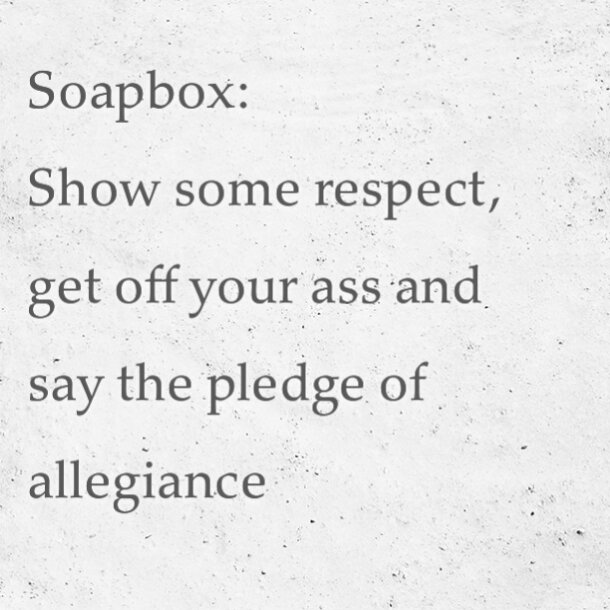 Just think about it.   You’re setting the example for future generations.  I for one, want my kids believing in what this country stands for.

One of the best things about this country is that if you don’t like something that’s going on, you can try to change things for the better.  You have that right because of all the men and women you have sworn allegiance to this flag of the United States of America and died defending what it stands for.

So the next time you have a chance to recite the pledge of allegiance, just get off you ass and do it.  Show some respect because there are far worse places to live in this world and I promise you, if you were stuck living in one of those places, you would do anything to be back in this country, reciting that pledge.

I totally agree.  It gives me goose bumps to hear a whole room full of people say the pledge or sing the national anthem.  I hope we never get so cynical that we can’t pledge ourselves to something larger.  I also wonder if the pledge is the one piece of language that all adults know by heart?  It’s our shared memory of countless mornings in countless classrooms.

I hear ya Rob. I was at a HR lucheon one year at the chamber meeting where there were about 500 people there eating a terrible lunch but there was a guy that I think was a house of represenatives guy, not a congressman but still when he was introduced there were so many people that didnt stand up in respect. i dont know why but i was so shocked. i personally didnt want to be there (was there for work) didnt particually like this guys views but whatever, he was elected to the house of representatives so you stand up. when he finished his speech everybody didnt stand up again. i thought it was very disrespectful. i know there are people that cant stand up for physical or mental reasons but that was not the case with at least 100 people standing up. after he spoke i left the luncheon and was so shaken that i called my boss to let him know i was going home for the day and had a meeting the next day with my boss i told him i couldnt go to those hr luncheons anymore as that was the last straw of their behavior. He didnt understand but said he would go from then on.

Keep in mind that some religions prohibit saying the pledge.  I’m not sure that they would participate in Martial Arts but I wanted to toss that out there.
I personally, feel that you should stand out of respect, but you can’t be forced to make a promise.  The pledge is just that.  In fact, someone doing it, ‘just to play along’ negated the value of the committment I am making.

I love and respect The United States of America but not the government; so I have no problem with saying The Pledge of Allegiance. Tom Cruise’s character in Born on the Fourth of July eventually says and feels the same thing about our country. Also, it doesn’t hurt to try and fit in and make others happy by just doing it.