Picture of the Day: A cool picture of Elliott and myself

I’ve been thinking about this post for quite some time.  There have been a great many trials faced this past year by my family.  These trials were faced head on and as a family.

When I look back on 2013, there were a handful of truly significant challenges that really stand out against the rest.

Probably the most stressful problem we faced was having Child Protective Services called on us, twice.  The first investigation was launched in late Spring, just as school was getting ready to let out for the Summer.

Someone filed a complaint stating that we never took our kids to the doctors.  Utterly ridiculous and easily disproven but we had to endure an investigation that violated not only our home but our right to privacy as well.

It was truly awful.

The investigators were actually really nice but they needed access to every part of our lives.  As through as they were, they always treated us with respect and that made it bearable.

Once we were actually interviewed and they got a better understanding of what was going on, they realized that the call to Child Protective Services was made out of spite.  Even with that knowledge, the investigation had to continue to completion.

It seemed that this process dragged on for months before we got the official all clear. 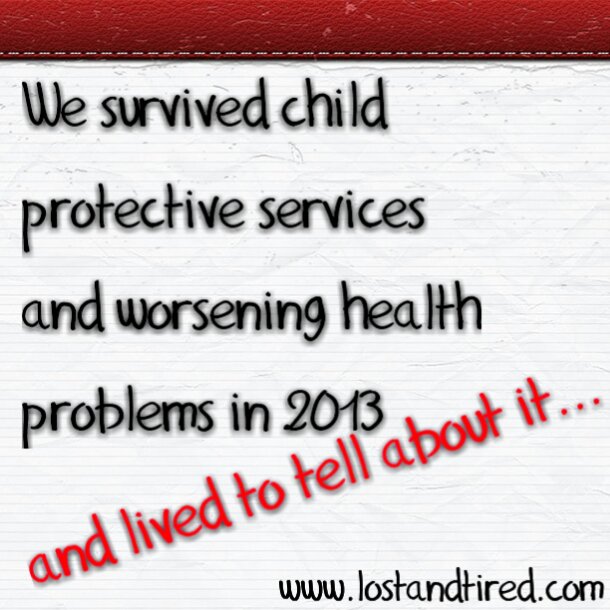 This was easily one of the most difficult things I’ve even had to do because for the first time, I realized that anyone can say anything and the burden of proof falls on our shoulders. The accuser doesn’t have to even identify themselves and they don’t need any proof of anything.  They simply make an accusation and we are forced to defend ourselves.

The worst part is that we more likely than not, know the person that called but we’ll never know for sure who they are because their identity is protected.

The second time Child Protective Services were called was only a few months later.

I don’t think we ever even knew what the full accusation was.  This time however, it was shut down pretty quick and the only reason we even found out about it was because we heard from our doctors that they had been questioned.

This was really scary for us because we had no idea what to expect.  We didn’t know our rights or what they could or couldn’t do..  In the back of our mind, we knew that they had the power to take the kids and so we cooperated in every manner possible.  Unless this has happened to you, it’s difficult to explain how terrifying this is.

One of the other more devastating experiences this year was Lizze finding out that she was officially in Menopause.  She was 32 when she was diagnosed by the Cleveland Clinic.

Her doctor says that she entered Menopause about 20-25 years early.
She began hormone replacement therapy but it’s not helped with the symptoms much.

I’ve spent a great deal of time trying to understand the whole process of Menopause and I’ve learned that some women gracefully exist the reproductive part of their lives and other women, like Lizze, go through hell.

Aside from the physical symptoms like moodiness to hot flashes, there is also a huge emotional side to this that I’m still working to better understand.

Lizze was and still is devastated by this.  For more on Lizze’s Menopause journey, click —–> Here

Gavin’s health played a large role in dictating our lives this past year.  Between all the hospital trips and Autonomic Crises, his health has truly terrified me.

We not only found new symptoms but worsening ones as well.

Over the course of the year, Gavin’s immune system worsened and his IVIG dosage had to be increased to compensate.

As the year went on, Gavin became more and more Autonomically unstable, to the point that he can no longer tolerate the trip to Akron Children’s Hospital for his monthly IVIG Infusion.

It’s been decided that he will have to undergo these infusions at home from now on but we are still waiting to get that set up.

Within the last month or so, we discovered that Gavin’s lost a great deal of weight over the past 6 months.  We hadn’t noticed because he always wears long sleeves and thick baggy clothes.  He also eats like a horse and between that and the more life threatening things we were focused on with him, his weight went unnoticed.

Now we’re working to figure out what’s causing this and what we can do to address it.

Gavin’s health is a never ending battle that I feel as though we are constantly losing.  This has been truly a challenge this year but one we have survived.

Lastly of course, we have the loss of our van due to repossession. This makes things everything that much more challenging but it’s something that we are trying to work through.

While we will carry the scars of this past year with us as we move forward, we will more forward.  We will move forward together,  stronger than we were before.

Despite all of these struggles, there were also fantastic victories as well. Stay tuned for a follow-up post sharing our victories.