JUST KILL ME NOW – Gavin and the homework saga


This is one of those posts that I haven’t done in a really long time.  I’m gonna be brutally honest about how I’m feeling and what I’m thinking.  It’s really important that you not take what I’m saying, outside the context of this post.

Today I’ve reached a new level of frustration with Gavin. It got to the point that I had to tell him that he needs to stop talking to me.  I couldn’t process what I had just learned, especially with him talking in my ear nonstop.

I’ve gotten a bit ahead of myself.. Let me start at the beginning. 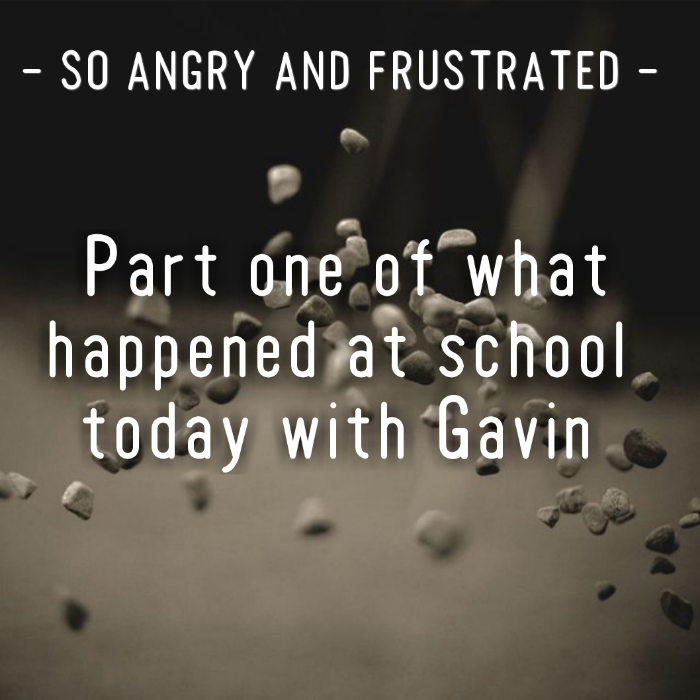 I managed to get Lizze out of the house today by taking her to lunch.  Her social anxiety is crippling, so we just ate in the car and waited for the boys to be done with school.

We went into the school a bit early because I wanted to speak with the office.  Lizze was very comfortable there so she chatted with the office administration and I was collecting the kids as they came down the hall.

The day was going pretty well and I was feeling positive about the rest of the afternoon.

That’s when it happened.

I said hello to Gavin and his response was, “Dad, I have to tell you something.”

I immediately began to shutdown because I know what conversations like this lead to and it’s not a pleasant place.

He told me that his teacher, Mr. M, wanted him to bring his math worksheet home so we could see it. Gavin was really vague about the details and basically said that he didn’t know why.

After we got in the car to go home, Lizze and I began to ask him questions about what happened, so we had a better understanding of what went down.

Gavin acted as though he had no idea why his teacher would want us to see his paper. The conversation was maddening because it was clear that he knew what he did, he just didn’t want us to know.

Lizze decided to call the school and leave a message for Mr. M. We were going to get to the bottom of this, one way for another.

When we would ask Gavin a direct question, he would answer it in a way that would evade the question being asked. I swear, I just wanted to beat my head into the steering and drown out his excuses.

When we heard back from his teacher, we learned some things that have me questioning myself all over again.

Turns out that Gavin has been pulling the same crap we caught him doing a few months ago. He’s not doing his school work and then turning it in incomplete. He’s also getting his friends and teachers to help him, instead of doing the work himself.

His teacher went on to explain what else Gavin has been doing.  Apparently he puts nonsensical answers on his work and then sneaks up to the teachers desk, while he’s occupied with another student and puts his paper in the middle of the pile so that it isn’t found until later because he just doesn’t want to do the work.

Lizze explained that we see the same thing at home and we are concerned that the work is over his head.

Mr. M stopped Lizze and said that he had to respectfully disagree with the notion that the work is over via head.  He said that while in class, Gavin rattles off the answers with no problem.  He knows how to do the work but so some reason he just doesn’t want to do the in class work/homework.

We decided that from now on, we will sign every single one of his worksheets that he has to complete at home because he didn’t finish it in school.  This way his teacher knows we’ve seen the work.

When Lizze got off the phone, we sat down at talked to Gavin.  He tried to change the subject and then had a little tantrum, complete with hitting himself and everything.

He knew that we knew what was going on.  He knew that his teacher and his parents were on the same page again.  He finally admitted to doing these things but was unable to tell us why he was doing them.

The conversation devolved from there and I just couldn’t listen to him try to play the victim.

I was so pissed off and frustrated that I didn’t even want to hear his voice.  I told him to just stop talking and go to his room.

Lizze and I have to figure out what to do here because this can’t continue.

I’m going to stop here and save my thoughts for the next post.  I’m still trying to process this and figure out what I think and feel because this isn’t cut and dry. There are many things to consider and at least one meeting with everyone, so that we can ensure that we are all on the same page.

to me again, he almost DIES going to the cleveland clinic every month. he knows the work. pick your battle. he has real emotional problems. why make the physical and mental stress worse on him which is bad for him and the drama that you and lizzie are both pulled into with this makes you feel crazy. the teacher says he knows the work. that is why he goes to school. maybe try it for a semester of not doing the homework and see if your stress level comes down. it will be worth it. Been there done this. my kid is smart and is fine without the homework he didnt do.

NicoleHenderson  I just wanted to let you know that I have been telling rob and them to forget the homework. the teacher says he knows the work. Gavin just about DIES (for real) everytime he goes to the cleveland clinic for ivig. In my opinion, which all this is, is that we all pick our battles and he is not a regular fourth grader. he does have special needs and this is the time to play that card. He has real emotional problems. why put more stress on his mind and body. nothing against you at all but there is a real excuse. we should treat these children individually.

i just said it on another post. is it worth the time and effort on the homework even if Gavin is playing some kind of game or getting out of the work or whatever he is doing. The great news is the teacher says he knows the work. that is the point of school to learn the work. he does have special needs so i say play that card. remember you were/are so worried going to get his ivig. if he crashed etc., would the homework fight the day before even matter? He is your kid but i think you are puttting too much on you. i understand that you think and gavin probably is trying to get out of the work but it doesnt matter. we choose our battles all the time. choose no on this one

Hey Rob, we too have been through something similar, when Jack changed schools 2years ago he absolutely refused to do all work as he thought it was “stupid” or “too hard”- it was all a reaction to unscheduled change, feeling that he hadn’t been involved in the choice to move (not a choice but a harsh financial reality) BUT the real problem was the learning regression that happened in that period – we are still trying to catch up. A change in teaching methods was also a problem and caused confusion – but ultimately it was a power play. He was angry with us and this was his way of responding to circumstances he felt no control over. This won’t help your current situation but the up side is that it opened up a conversation for us with our team, old and new, and we found out what the why and what. Talk to everyone – especially Gavin (as hard as that is to do right now) – and push him forward – like you always do. Love to you all.

I can sympathize with that. Parenting is an evolutionary process when you have special needs children. Every day is completely different and issues seemingly pop out of the blue without much warning. It’s good that you have a support group to brain storm with and the support of the school.

Do you mind me asking how old Gavin is? My son is 16 and reading about Gavin’s situation is déjà vu for me. I totally empathize with you remembering what we went through with my son.

I know with my son he is able to answer questions and sound like he gets it. When it comes to doing it on his own 1) he can’t concentrate enough and 2) he can’t process it right. He’s definitely more of a “hands on” learner. I’m not sure if that helps Rob but, I do know that you and Lizzie have Gavin’s best interest at heart. I’ll be praying and sending positive thoughts your way.

Ashley McClenny that’s a good point but I don’t think that’s the case with Gavin. To be honest, I don’t really have a clue what’s going on because there are so many possibilities. 🙁

Brianne Knight amen. He does have an IEP and that what our meeting is going to be about. What’s so frustrating is that he does have cognitive issues and so it’s easy to believe that he can’t do it. He knows this and is apparently using it to his advantage. 🙁

Don’t let the school keep sending his work home because he won’t do it there. My son is having a similar problem (kind of) where he won’t do the work and it has nothing to do with him not knowing it, he just can’t focus and needs to have constant redirection. His teacher kept sending home his work telling me that he needed to complete it at home. If I wanted to spend hours doing his schoolwork and his homework, I would just homeschool my son. Once I brought it to the attention of the IEP team, the situation has been remedied where my son is getting more one on one time where he is forced to complete his work at school. I know it isn’t exactly the same situation, but it isn’t fair to you as a parent to have to do what should be handled in the school setting as opposed to the home setting. I hope Gavin has an IEP so that you can get something worked into it where he will have to do his work at school.

As a teacher I must say THANK YOU for not making excuses for Gavin. Also, while I realize you are upset and frustrated (I would be too) please know that this is something I see A LOT with my fourth graders in a regular education class. Seriously, you’d be surprised… Sorry, this comment probably wasn’t very helpful…You are a GREAT dad! 🙂