My morning has officially begun


Lizze had her first of two weeping appointments with Dr. Pattie this morning.  Apparently, the topic for today was what to do about the Cleveland Clinic psychiatrist that’s refusing to treat her depression.

Not only has Dr. Pattie physically made the trip to Cleveland to meet with this doctor, she also had a phone conversation as well.

The long and short of the situation is that he is refusing to treat Lizze’s depression until she’s in DBT therapy. 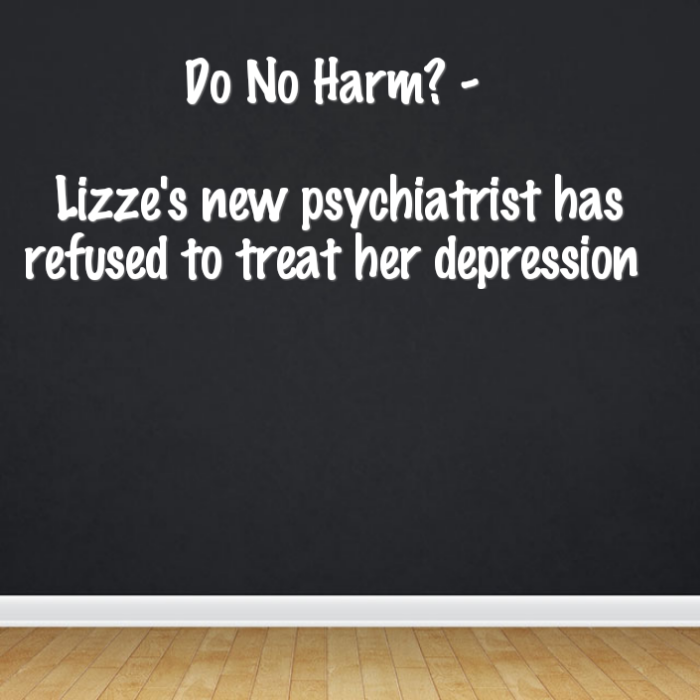 Dr. Pattie explained that we are trying to get into this therapy but there are some major obstacles in our way right now.  For starters, insurance is a huge issue and one that we have not been able to overcome.

Secondly, the places that are potentially possible, are a significant distance away.

It’s not that we are unwilling to make the trip but the reality is that it would be next to impossible to make this work.  The meetings or group therapy sessions are held in the evenings from what I’m told and I don’t know how we could manage that with the boys.

We still haven’t been able to replace our car yet and so the only reason the boys are getting to school is because my parents are generous enough to let us use their car during the week.

Dr. Pattie said that she tried to explain all that we have going on and that Lizze needs help now but he still refused to treat her depression until she is in DBT therapy.  He wants to know that Lizze is serious about getting better.

Look,  I understand where he’s coming from.  Unfortunately, he doesn’t really know my wife at all because if he did, he would know that she has 3 very important reasons to get better.  That’s on top of wanting to get better for herself.

What this doctor is doing is basically basing his decision on what he experiences with the vast number of patients that he sees.  I understand that.  The problem however, is that he’s not looking at Lizze as an individual.  I mean for God’s sake, she not looking for pain meds.  She’s simply looking to get help with her severe depression.

She’s already on an antidepressant but it’s not working and her primary care physician wanted her to be seen by a psychiatrist because she felt her depression was too severe to not be managed by someone who specializes in that area.  That’s that whole reason she went to the Cleveland Clinic in the first place.

I’m not sure what we are going to do now.

I don’t think that we are going to be able to convince him that we are trying everything we can to make this work.  We’re still looking for the DBT therapy that we can actually make work.

The simple fact that we drive 3 hours to see him for a 20 minute appointment should say something about her commitment to getting better.

If we want to make it there for her appointment on Thursday, we have to move heaven and earth because her appointment is at the same time the boys need picked up from school.

That means that her Mom has to leave work to get the boys and then take them to my parents house so she can go back to work.

Everyone’s willing to help but what’s the point of putting everyone through this if the doctor already has his mind made up?

One would think that there is some sort of ethical obligation to help someone who’s asking for help with severe depression.

If we don’t go to this appointment, I feel like we are going to prove him right about her.  That said, if we drive the 3 hours to see him, nothing is likely to change in the 20 minute time slot we have to see him.

I don’t understand that people with Borderline Personality Disorder can be more sensitive to medications, especially antidepressants but she needs help and depression has been a long standing problem.

No one is expecting antidepressants to fix everything.  We know that getting better is going to require a lot of hard work but something has to give….  She needs help and if this guy isn’t going to help her than why do we keep making these long expensive trips?

i am glad you are going to get a new dr. i know how exasperating this is for you. drs and ins not listening makes me crazy. you said lizzie has three reasons to get better, actually four. this means you Rob. and then five which would be herself because i know she is miserable.

The meds I was on after my sons father’s suicide required a monthly visit….unfortunately for me they didn’t help one bit. After stopping Cymbalta I had horrible side effects. If this is a medication they are considering for her or that she’s on google cymbalta brain zaps…they’re horrible.

what is wrong with him? Simple way to see for himself if she’s willing to keep trying to find a DBT therapy that will work for her and is covered by your insurance is to only give her a prescription that covers from one appointment to the next, or day after so there’s no worrying if the pharmacy is out or running low on that script. That would require you to go see him every single month or whatever until you find a therapy that works, and proves to him that you are trying.

Just a thought….can the DBT be delivered via telemedicine?  I know in many rural areas Doc appointments can be done via telemedicine. Wish you guys had a Psych option closer to home than 3 hours away.
Hang in there.

I thought you wanted better than a doc-in-a-box prescribing anti-depressants that don’t help; isn’t that why you went to the Cleveland Clinic in the first place?  It’s a terrible thing that you are limited by your insurance — if you lived in Canada, or England, or Scandinavia, you’d be so much better off.

There’s actually a published study by NCBI that supports this doctor’s reasoning.  It found that antidepressants need to be custom picked and delivered in targeted doses AFTER the inception of Dialetical Behavior Therapy.  Any general practitioner can prescribe SSRI’s and SNRI’s.  A true professional tries to select the proper medication (out of the dozens out there) and dosage for each patient, and part of that process includes DBT.
It seems like he has her best interests at heart.  He’s trying to treat the person…not just put a band-aid on a bullet wound.

While I understand the doctor’s position on this, it sounds like it might be a good idea to find a new
psychiatrist.  One who will see her as an individual rather than seeing her as Patient #346.