No one was killed at our IEP meeting yesterday...so that's good right? -

No one was killed at our IEP meeting yesterday…so that’s good right?

Today’s IEP meeting for Gavin was more challenging than anything we’ve previously experienced at the boys school.  I’ll start out by saying that no one was killed or even injured during this almost 90 meeting today.

There were a few topics that were the focus of today’s meeting.

It began like every other IEP meeting but this one was more about preparing him to transition to the high school… When  we realized that, we sorta stopped the meeting because we’re not convinced that he’s actually going to be moving in to high school. 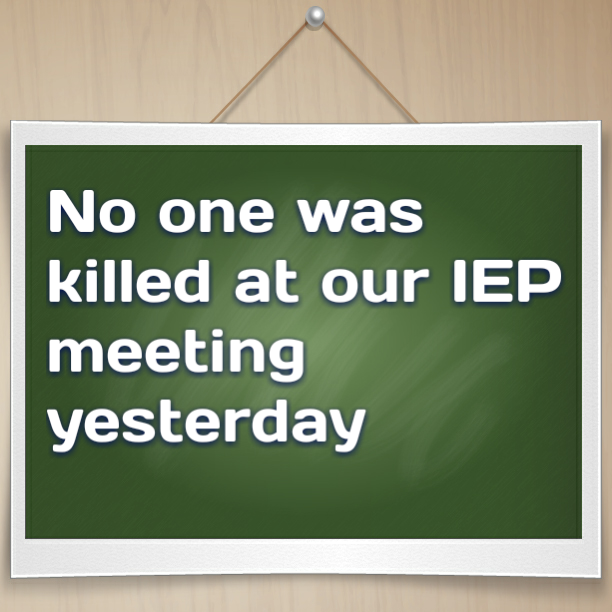 His teachers are still saying that he’s capable of the work, he’s just not doing it. The question again is why? At the same time, Lopez, myself and Dr. Pattie are not convinced he is capable of doing the work.. We are suspecting that his overall intelligence is regressing. Dr. Pattie is a sought after educational evaluator and has worked with many school districts, so she knows her stuff.

The discussion moved to whether or not Gavin needs to be held back a year..

Apparently, holding a child back is a somewhat complex process and one that can be time consuming. There are a lot of variables involved in making that type of decision but we have officially gotten the ball rolling in that and we’ll be having another meeting shortly to focus on that.

We once again attempted to get everyone on the same page and focused on Gavin’s behavioral issues. The most prominent issue we have is the compulsive lying…

Unfortunately, no one was really receptive to that information because they see Gavin as this charming, fragile, kind and honest soul.
I tried to explain that they may not think he’s lying to them but once you catch him in the act, everything going we’ve been trying for to tell them will finally make sense.

His one teacher did tell us that when Gavin was supposed to be working in the computer for school, he told her that Lines and I had forbade him from doing so. That of course, isn’t even in the same universe as being true. He lost his tablet because of his lying. We never said anything about anything else…..

We also learned that this same teacher has been telling Gavin for almost 2 months that she wants him to show us his language arts homework before he turns it in… Gavin has been conviently forgetting to do that every day.

To counter all this deception, we’ve all decided that every single homework assignment must be signed by Lizze or myself. This way the teacher knows we’ve seen it and Gavin knows he can manipulate anyone because we’re all on the same page….

Everyone as a whole is concerned about Gavin missing so much school because of his health. We have another meeting set up to discuss what our options are in that regard.

Truthfully, the meeting didn’t go bad. They never really do and that’s testimony to how great this school and her staff are.. That being said, I’m really frustrated that we can seem to get people to see Gavin for who he is and not who he presents himself as. Does that make sense?

I feel like we look crazy when we are trying to warn them about these behavioral issues.

Gavin’s very charming and he’s a gifted manipulator. It’s really hard to see these things, especially if you don’t want to see them… I feel like so much progress could be made if we could get people to accept these things and just be aware that these behaviors are present, even if they don’t see them right away.

Sadly, I think that human nature prevents this from happening…

No one wants to believe that a child is capable of these things. I personally struggle with that as week so I can’t really blame them for it. They truly have his best interests at heart and that’s something that shouldn’t be understated…..

That’s not to say that I’m really frustrated……because I really am..

I really think you should follow your heart. You and Dr Pattie think that school for Gavin might be a joke with all of his medical issues. Is it really necessary for him to go through all the hassle, struggles, and frustration that school brings on him. I don’t discourage him from learning but they should think outside of the box and find some other way to teach him. Of course, with his fragile medical condition would it even be possible for him to hold down a job later in life? If the answer is no, then is school really the answer for him. I’m not saying i’m right with this thinking just something to ponder and talk over with Dr. Pattie.

i know you are tired of hearing this from me lol. screw the homework. if the teacher told him for two months and he didnt it seems that they would have contacted you after week one

redthread16  that my friend is the million dollar question… I don’t think there’s any way to answer that for sure….

i believe you know your son better than anyone. Since you have expressed that Gavin has been experiencing auditory and visual hallucinations lately, how do you gauge what his perception of reality is at any given time?