I’m a little bit upset and I’m not sure who to really direct it at.  I was approached by Gavin’s teacher last week and asked if we would be willing to delay Gavin’s infusion today so that he could take his OAA (Ohio Academic Achievement) test.

She said it would be difficult for him to make that up.

It was only a 30 question science test and my understanding was that it wouldn’t take very long.  When he was done, I would pick him up and we would do his infusion.

I get the impression that Gavin’s health issues either aren’t understood by his teachers or not taken seriously.  It’s most likely a lack of understanding but we’ve tried to explain this several times now. 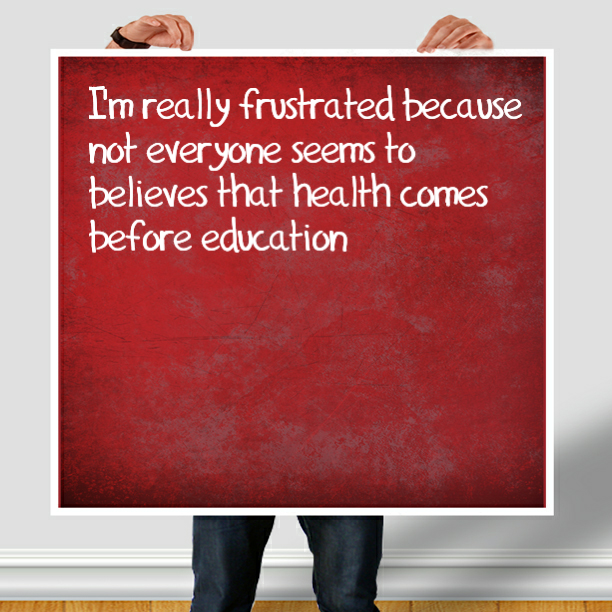 Here’s the reality of the situation..

Gavin’s health takes priority over his education.. Period. There’s no room for negotiation and I made a mistake doing so.

I’m not sure what happened today but Gavin didn’t end up getting his infusion until 4pm. My understanding when I agreed to this was that it was going to be a quick test and we would be delayed by 2 hours or so…
By the time Gavin finished his test, it didn’t make sense to pick him up early because school was almost over and we can’t afford to make any more trips than necessary because of the cost of fuel and our very humble budget right now.

When I did pick the boys up, I was already irritated because missing his morning infusion really stresses me out.

One of his teachers told me that Gavin did really good on his test today.  He took his time and made sure he did his very best.  Now I’m really upset because I don’t know who to be upset with.

Is it the teachers for not wanting him to make up the test when he returned to school next week? Perhaps I should be frustrated with Gavin because he took his time? Gavin never takes his time when it comes to tests.  In fact, I’ve talked many times about how frustrated I was that he rushed through his tests so he could be the first one done.

He picks today, when he’s supposed to get a donor immune system infused into his body so he doesn’t get sick because he doesn’t have an immune system of his own, to decide to take his time.

This stinks of manipulation and that pisses me off.

Despite everything that he puts his entire family through, just for shits and giggles, I worry constantly about his health.

Next time I find myself in a similar situation I will apply what I’ve learned this time around.  To hell with his education.  His health and safety come before a stupid test….

If the timing was that important, you wouldn’t have given in.

Lost and Tired
Reply to  jackblack

We are trying to find some kind of balance.. It’s not easy..

jackblack
Reply to  Lost and Tired

The sad reality is that the teachers definitely care more about the standardized state wide tests than they do about his health. Very few things can be used to “grade” a teacher, and these tests are one of them.

Lost and Tired
Reply to  jackblack

no rob you are not crazy. just the best dad ever!

While I don’t agree with you, I certainly appreciate the sentiment.. ☺

well as you know (not that i am a part of your childs care team), I sure as hell think his health is more important than that test or schoolwork in general. I would just let it go. I do understand when it is easier sometimes to cave to the pressure of what they want you to do and then you feel bad about it. at least it is done. Regarding him doing well on the test and it taking all day. Just praise him when he has done well (even though he may have manipulated the time and him knowing ivig had to be done etc) and ignore when he doesnt on the school work. You are going to just have to make that your new game plan and stick to it. It doesnt have to be forever. I think things are going to be easier on your mind and his doing it that way. you already know that fussing about school work is not going to change what he does right now. you do know that praise is always good. hang in there. Also, i realize that you cant get the school to understand about his health. realize that you just caved under the pressure this time, we all do. also, i know you won’t take this the wrong way as we have disussed that previously and i only want the best for yall- keep in mind that you may be giving mixed signals to the school about schoolwork for ex: him cheating and you making a big deal (because you thought/think it was) at school. they may have thought “we better get gavin in here for his test so his dad will think that we think schoolwork is important” or whatever they were thinking. they may be confused on what is more important because like i said they might seem to be getting mixed signals. all the best to ya

Thanks.. So I’m not crazy then?