“Splitting” – I didn’t see this coming and I was wrong

My personal victory for the day

“Splitting” – I didn’t see this coming and I was wrong


One of the things that’s really, really tough about raising a child like Gavin, is something called splitting. Splitting is essentially what it sounds like.  The child seeks to create tension, chaos and drive a wedge between two people or parties.

This is something Lizze and I have been warned about for years but until last night, I had thought I was smart enough to not let this happen.

I guess smart enough is the wrong choice of words.  I thought I was aware enough of splitting, to avoid allowing him to do this to us.  I was wrong and wrong in a big way.

Last night it all sorta came to a head while we were at Dr. Pattie’s. 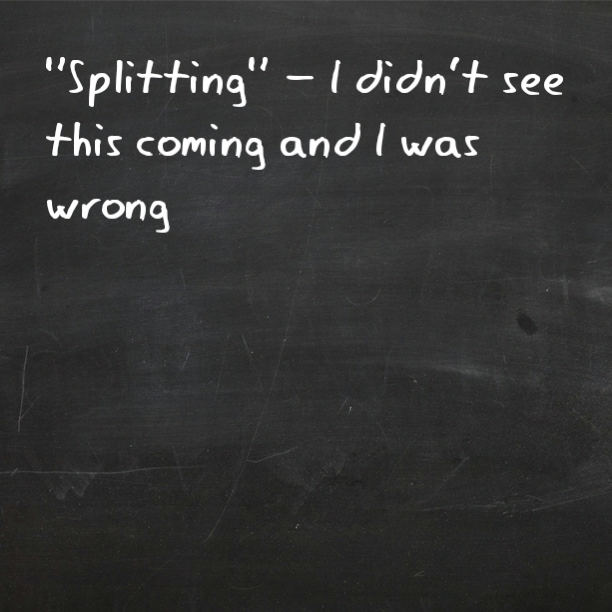 We were talking about what was going on with Gavin and what he’s doing to Lizze.  The conversation between Lizze and I got really heated and emotional.

She was convinced the Gavin was splitting us.  I argued that I was very aware of what he was trying to do and it wasn’t working.

Ironically however, it took the better part of an hour of intense arguing for me to realize that she was absolutely right…

We were fighting because he successfully pitted us against each other. It took me succumbing to the splitting to realize what was happening.

I didn’t understand what was actually happening because he I thought I was smarter then he was.  Clearly I underestimated his abilities.

While this has been a source of strain between Lizze and I, at least we both recognize it for what it is and can once again say that we are on the same page.

That being said, Gavin overheard part of our conversation and could see that he succeeded in his goals of dividing us.  He became emboldened with this knowledge and after a few days of leaving Lizze alone, he started up again this morning.

At least we are more aware of what’s going on now and Lizze and I are back on the same page.

Nothing about this is easy…….

keep in mind that couples fight (which is precisely why i am not married because i am not good at arguing and then i go for the jugular as i have been told, which i do because i want it to end) and since lizze is sick a lot there may be a lot of bottled up stuff and then you have so many responsibilities that maybe you were too close to the situiation to see and at least the arguement happended at dr patties so it could be a heated but fair arguement. i dont think it was bad for gavin to see that yall had the arguement cause he also heard that it was over and both of you are on the same page. it might have helped him see that he actually didnt get his desired reaction because you all were able to “make up”. dont be hard on yourself. i am glad yall have dr pattie to go to. i wish you had time for some therapy for yourself since you have so much going on. i am sure you are saying where is the time. i say the same thing, either no money or no time. i wish we could skype therapy. I am sure there is a market for it. my only theapy is this blog.

Thanks. 🙂 I’m really grateful we have her as well.

Perhaps it’s too personal, but could you provide a specific example of this “splitting”? I mean, I get that Gavin plays each of you against the other, but what exactly is the deception- I mean, as well as you know him and as aware of the splitting as you are, I would have to think it must be pretty devious to be able to manipulate the two of you. If it’s too personal, then forget it, but I would just like to get a better handle on what splitting is and how it manifests itself.

Lost and Tired
Reply to  JOSH

Not at all. Basically, he’s one person to Lizze and another to me. He messes with her but only does it when there are no witnesses. What happens is, when Lizze’s says something about it, he then denies that it happened.

If I say something to him about what he did to Lizze, he tells me that it didn’t happen and it comes down to his word against hers.

He’s managed to split us and at least some of the school. His teachers don’t believe us when we tell them what’s going on. Gavin will tell us something that is upsetting about his teachers. We address the problem and find out their side of the story, only to find that none of it was true.

He will also tell his teachers things about us that aren’t true. His intention is to create tension. When he creates tension and chaos, we are less likely to catch him at whatever it is he wants to do.

Have you seen the movie “The Good Son”? That is exactly what’s happening but without the physical violence.

JOSH
Reply to  Lost and Tired

Thanks for clarifying. Sounds like the best “defense” is good communication by all parties and making sure everyone is on the same page. Easier said than done- especially when dealing with school. Sometimes that’s hard enough within one’s own family 🙂

As a child, I never consciously engaged in splitting, but then again, I never really -had- to; my mother and father were already at odds with each other due to his being a functional maniac with physically violent outbursts, so there was already a split there without my intervention. I put myself between them under the interests of protecting my mother, but I wonder what would have happened had my family been a peaceful one; would I have engaged in this behavior? Would I have caused a split where there was not already one? Is it even worth thinking about hypothetical scenarios when I would be an entirely different person altogether?

Thank you for sharing… 🙂