When your child wants to kill themselves -

When your child wants to kill themselves

This evening, something happened that has shattered me. I’ve spent the night trying to pick up the pieces and process what happened.

Elliott was really upset this afternoon and he was kind of hit or miss for most of the rest of the day.

Right now he’s really focused on a toy that went missing.  It’s been missing for at least a year but he’s just taken notice.  He’s very, very preoccupied by this.  A lot of time has been spent crying over this for the past few days. 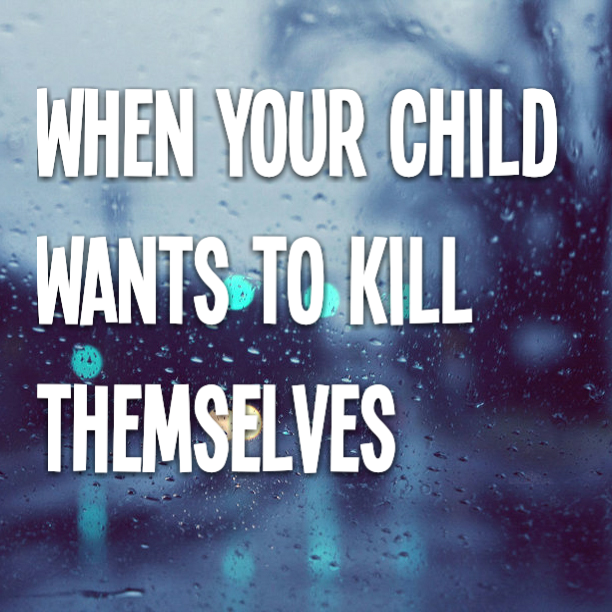 What changed everything tonight was what he said while sitting next to me on the couch.

There are a great many things that a parent never wants to hear come out of their child’s mouth.  However, there are five words that will bring any parent to their knees and shatter their heart.

Those five words are “I want to kill myself”.

I heard those words come from Elliott tonight and it shook me to the core.  Lizze and I immediately responded to him and wanted to know if he’s ever thought that before. He said yes and I literally felt like I was made of glass and his words were stones being thrown at me.

Lizze reached out to Dr. Pattie and spent some time talking to Elliott.

He didn’t want to talk about it at first and it took a little prodding to get him to open up.

When I asked him why he wanted to kill himself, he eventually told me that “if I killed myself, your life would be better because I’m such a pain in the butt”.

I was completely floored to hear this.  I told him that I was so sorry he felt that way but he needed to understand that killing himself would not make our lives better.  I wanted him to know that he’s not a pain in the butt and that he’s one of the absolute best things to ever happen to me.

I asked him if he would pinky promise that if he had these thoughts again, that he would tell me or Lizze.  He agreed and that was that.

Dr. Pattie told us to try and feel him out and not make a huge deal out of this to him.  We needed to find out where he was coming from and kind of gauge whether he was serious or not.

He went to bed in a better place tonight but in the morning, I will be calling Dr. Reynolds office to let them know what’s going on and find out if this could be related to the Abilify he’s been on for awhile now.

At this point, we have open communication with everyone but most importantly Elliott.

It’s a hugely positive thing that he’s being open and honest about this with us.  His willingness to talk about it is going to play a big role in helping him through this time in his life.

As for me, I’m freaking out.  This has me even more hypervigilant than normal and this is really tough because he almost died when he was born.  I’ve felt the pain of not knowing if I would ever see him again and it literally broke me in a way that will never truly heal.

All I can do is be there for him and make sure he has every ounce of support he needs, regardless of the cost.

I will ask that you please keep my Elliott in your thoughts and prayers.
I’m gonna try to get some sleep tonight but this has me pretty frazzled.

i am glad you are on top of this and it seems you handled it the best you could. snapcrakklepop has a great idea. i am glad you are able to get him to the dr. my sick kid is on a lot of meds and i told you about the horrible pyche reaction he had in the hospital recently to iv ativan which horrified me as he thougt spiders were crawling on him etc and i couldnt get him to stop thinking about that of course i was thinking the worst that he wouldn’t not come out of whatever was going on and i was brought to my knees again, and all his meds scare me. I am on cymbalta for depression that i have, or think i should have (cause of my crazy life) and i am so frustrated cause it is so hard to come off of. i dont have thoughts of suiside but if you dont take the medicine every day i (have read that this has happened to other people) feel awful, feel like a quick weird electric shock jolts me etc. the worst thing i ever did was get on this med cause i need to get off of it and titrating down is the only way but is horrible. my whole point is we do what we think is best for us and the kids and we dont know what medicine may be doing what. We do know if elliot has picked the words up somewhere about killing him self and just said it or needed reassurance that you didnt know he needed that he was not a problem. these kids know our life is hard. you have heard that when people get divorced that the kids blame themselves when it has nothing to do with them. this could be the same kind of thing that there are so many issues at your house (that are not your fault) he might be blaming himself. I am sure he hears some/a lot of the Gavin stuff going on and he is just stressed and he may just be thinking of you guys “if you had just one less problem, etc.). keep in mind though that all families have stress, death, sickness and crazy stuff going on at some level so try not to blame yourselves for what he sees from his point of view. he could have heard this at school. it could be anything. glad he told you.

Rob, I’m so sorry you’re going through this. I would pursue looking into the Abilify because I’ve recently been through a recent incident with my 8 year old son Jayden. He started Abilify for depression about a month ago and two weeks ago started saying he wishes he was dead because then he’d be happy. He seemed genuine but the doctors said just to monitor him and remove harmful objects from the house. Jayden went to therapy and seemed fine for a few days, even happy. Then out of the blue he climbed to the top of the monkey bars at school and prepared to dive off head first and crack his skull. The staff caught him just in time. Jayden ended up being admitted to a psychatric hospital for about a week. He just came home and is still withdrawn but at the hospital they immediately took him off the Abilify because it can cause suicidal idealations in kids. He’s now on Risperidone and were hoping for the best. So maybe get a second opinion about the Abilify because it may be contributing. But anyway, I will keep you in my thoughts and prayers, I know how heartbreaking it is to hear a child say he wants to die. You are a great parent and Elliot is lucky to have such a caring father. Take care Rob, it’ll be ok.

OMG… I’m so sorry.. That’s my fear. They said it’s not likely the abilify because he’s on such a low dose but we’re keeping an eye on it. He’s starting Prozac for severe depression and we’re being told that the two meds will work together to balance each other out.

“This has me even more hypervigilant than normal and this is really tough because he almost died when he was born. I’ve felt the pain of not knowing if I would ever see him again and it literally broke me in a way that will never truly heal.”

This really resonated with me… Maybe you need to let him know that, specifically. Do you have a photo album or baby book with pictures of him growing up? You could sit down with him and go through each picture, telling him what was happening when you took it and how happy it made you to see him do whatever he’s doing in the picture. Basically, give him a chance to see that every day he’s been alive, he’s added something to your life that could never, ever be matched if he weren’t there to be himself as part of your family. If he were to kill himself, then he’s leaving a whole bunch of blank pages that could (and will) be filled with more good moments, even if they are few and far between because life is crazy, but will just stay blank if he takes his own life.

I think that’s a good idea.

Lost and Tired
Reply to  snapcrakklepop

That is brilliant. Thank you..

Praying for all of you guys, tonight even more than all the other nights.