On a positive note…. 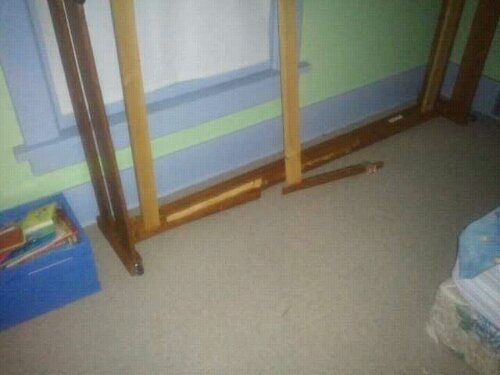 So Lizze is is out with her sister. Elliott was still awake when she left. He was having a hard time sleeping. I had given him a little snack and filled his water bottle and got him back upstairs. I put on Cloudy with a chance of meatballs and was tucking him in. He was all relaxed and closing his eyes. I leaned over to give him a kiss and next thing I know his entire bed frame collapses and mattress crashes to the floor. Guess who’s not sleeping now, that’s right, Elliott. It gets better I’m trying to clean up all the little splinters of his bed frame off the floor while reassuring Elliott everything is ok when Emmett starts screaming.

I’m bouncing back and forth between 2 kids that aren’t sleeping anymore while trying to pick up all the little pieces of his broken bed. All of this literally happened within the first 5 mins Lizze was gone.

Ok I have both kids sleeping and finished picking up the pieces to his bed. I looked at his bed (which I can’t haul outside until the morning) and it appears to have been broken before. It was the half passed repair job that had broken. Honestly I’m amazed that it held this long. I forget who we got this from but it apparently had broken for them and they tried to fix it, “tried” is the operative word here.
If your not going to fix it right why bother fixing it at all. I’ll look at it again in he morning but I think it will just be put out for the trash.

Oh and I called the windshield people for the van and they said the mount for the mirror comes out preinstalled. They said that my windshield came from the factory defective. They said they can however, move it back up to where it should have been. That will happen at some point next week. What are the freaking odds of that happening. I swear to God I just can’t win.