My Broken Heart: The True Story of The Bare-Handed Man


Going into this it sounds like a plug and I guess in some ways it is. But I truly am doing this and it is helping. So I thought I would share and maybe it could help someone else.

I may be partial to the Samsung Epic 4G if haven’t already noticed. There is a really good reason for that. Besides the phone being one (if not the best) of the best smartphones on the planet currently it has also heped bridge the communication gap between me and Emmett.

I use a program called Voice4u to help Emmett communicate with us. The app is available on the Android Market. Basically it allows me to take pictures of people, places and things. I then put the pictures in a catagory an record audio clips overtop of the pictures. As an example, if Emmett is hungry and we can’t figure out what it is he wants we can open the app on my Epic and Emmett can scroll through pictures of the food we have available in the house. He does this by swiping his finger across the screen to change pictures. When he finds the picture of what he wants he simply touches it. When he touches it he hears my voice saying the name, for example, Hotdog or crackers.

This also works for people he comes into contact with. I’m currently building a database of pictures of family and therapists. When I take their picture I have them say their name, for example, daddy, grandpa mommy. So now Emmett has the ability to swipe through pictures of people and when he touches them the introduce themselves in their very own voice.

We also have apps that help us with ASL. When we need to know a word we simply load the app and look up. When we touch the word a video loads instantly and demonstrates the sign. This has been REALLY helpful.

This has worked out really well for us. We do the same thing for places he goes as well. It helps him become familiar with people, places and things. He is even starting to learn the words as well. We have a very long road ahead but being able to use my Epic in this manner has literally been a godsend.

Most any Android device can do this so if you don’t have an Epic there’s nothing to worry about. The Epic is just particularly well suited for this job. The camera is 5mb and takes great pictures. So objects are easy to see and identify. The slide out keyboard helps for lots of typing. The screen is almost scratch proof so it’s ok if he uses it.

The other thing that really helps is the ability to store and play movies in tons of formats (.mkv,.avi,divx). I rip movies we own into 720p .mkvs and they play beautifully. As you are aware my kids are in the hospital quiet often and because of that we have struggled to find ways to make things easier for both them and us. Now we carry movies and educational games on my Epic and the kids have a way to make the time pass a little easier.

We used to carry around a binder with hard copies of all these things but now it’s all stored on the Epic.
We also can scan documents (medical records ect) and save them in pdf format for easy access on the go. I have owned many smartphones but this is by far the most useful. I hope this helps someone out there to find a creative way to utilize their smartphone to help bridge the gap caused by Autism or other developmental disorder. If anyone needs help setting something up please ask and I would love to be able to help. 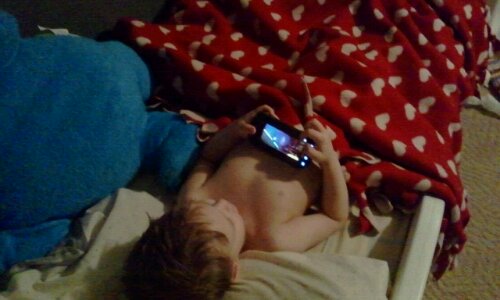 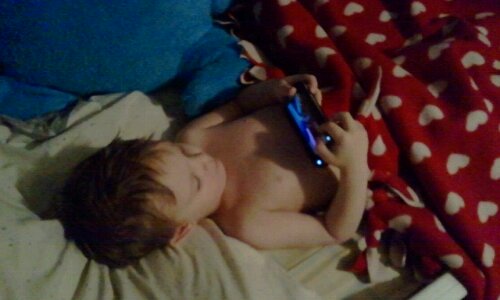 That's amazing, I'm very happy you're continually thinking of ways to help your kids. I think I may just as well find a use for this app. -Nol

Too awesome!! Sounds like a great android tablet app as well.

I bet doctors and clinics that specialize with these types of disorders would be interested in using something like this in their practice.

No wonder your ROM is the best, you think inside the box!! The Epic box that is

Isn't technology great? I'm glad to hear that you've found creative ways to use your phone that enhance your family's quality of life; I think that is the ultimate goal of a personal device.

While I haven't tried your ROMs yet (or any other customs, for that matter), I still appreciate the time you put into it, as well as this site. People such as yourself contributing back to society are what make me proudest of serving in the military. You're who I do it for. Thanks!

Thanks for the tips about the apps, I have an Iphone 4 and I have found some pretty cool apps there too. I read your blog and downloaded some ASL apps, thanks for the tip. My son Loves Signing Times and I found an app from them too! I was so excited I could not wait for this morning to come so I could show Alex!

I have heard of some pretty cool apps for the Iphone or Ipad for non-verbal children, I think I will look into them as my Alex is for the most part non-verbal. He has about 5 words as of now, but I have high hopes that they will come!

thanks for post, it reminded me about the communication apps I wanted to get/try for Alex.

Hope everything gets easier as time goes by, autism is hard with one child I can not imagine what it's like with more than one. You are super strong, I applaud you. Keep your head up, and now you have a new friend and support in me for what its worth I can tell you I totally understand the struggles we face as parents of children of the spectrum, I will keep your family in my prayers!

I'm sure you are aware of this therapy….but who knows?
K

I wanted to add I was thinking more from a easier to handle/not drop etc standpoint than use for the speakers etc.

I noticed in the pic you are just having the boys hold the phone. Is this correct? I'm not sure if you have seen anything like this but I saw this on my mommy board and one of the mom's there copied it and made it as well. I thought it might be something you could look into or make to help protect your phone if you didn't already have one. I know you have a different kind but maybe something along the same lines. Our DS was just diagnosed on the spectrum and I've downloaded some apps with flashcards for him. He loves it but I'm afraid to hand over my phone. So I might be trying this too.

I see your ROM, never had any idea how helpful the Epic has been for you. I am realizing this as I also noticed they have made apps using the FF camera to be able to sign with someone else, worked really fast for me too, I think because it's only video and no sound.