I had a heartbreaking conversation with my #Autistic 10 year old -

How migraines and desperation led us to explore CBD products

How #Depression is impacting my life right now

I had a heartbreaking conversation with my #Autistic 10 year old


I had a really tough conversation with the boys yesterday. Gavin wasn’t a part of it because he was on a mission in another galaxy when this went down. That’s not sarcasm either. Gavin’s Schizophrenic and truly believes he goes on missions.

Anyway, Elliott and Emmett had been fighting because that’s just what they do anymore.

While I was talking to them and trying to help resolve their current disagreement, Emmett opened up about some things bothering him. Neither of the boys ever really open up like this unless they’re really upset and it just sorta slips out. They’ve always been that way and I don’t know why.. 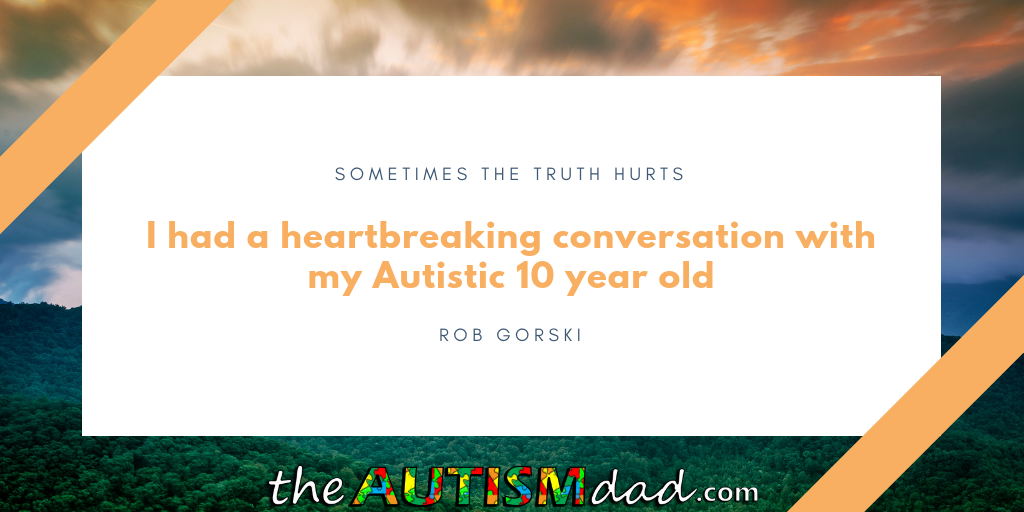 Anyway, Emmett kinda laid into me about why we can’t move to a better house. He listed a few things that were upsetting him and I just sorta listened, not knowing what to say.

Here’s a a few of the things he mentioned during his sharing session:

He’s not wrong and that made it a bitter pill to swallow. Nothing he said was inaccurate and he’s right.

No one feels safe because the neighborhood is not good. The frequent, almost daily gunfire doesn’t help instill a feeling of safety either. This is also why they can’t play outside very often.

Yes, our house is way too small. It’s simply too small for our family of 5. The boys need more space and we can’t give it to them here. Emmett’s absolutely right about that.

He’s also right that there aren’t enough power outlets. This is a significant issue on the second floor. Each bedroom only has one working outlet. It creates problems and while this isn’t life or death, it’s still an issue without a practical remedy.

This is a big one right now, especially as the boys get older. Their bedroom is simply too small. They are in the largest of the kids rooms and they are on top of each other. Between their beds and dressers, they have no room to play.

As for the car, I’ve mentioned that frequently as an ongoing problem. He’s right again. The car has major problems that aren’t worth fixing and the boys barely fit in the back seat anymore.

I have mentioned this before but I really feel like an independent set of eyes on your finances could do you a world of good. When you are stuck in the middle of things it can be very hard to see where cuts can be made but there are always places to cut back. From reading your posts through the years it’s clear that you are stuck in the ‘poor person’s state of mind’ where any money needs to be spent because you might never have money again. Just the other day you mentioned building a workout room despite needing a new car. Your family has more and newer tech gadgets and movie days than you might realize. Financial counseling is one of the best and smartest things you could do to help improve your situation. I don’t say this a way to kick you when you’re down, but I really do think that things could be better for you and your family if you just allowed someone else to look at where the money goes. As for Emmett telling you that his room/house/car are too small? I’m trying to think of what my parents would have said to that had I ever told them that what they were doing and providing wasn’t good enough. I can only think that it would NOT have been pretty. 🙂

It’s me
Reply to  kimmy gebhardt

I completely agree with Kimmy. And I actually have no words for what Emmet said to you. Why do you shoulder everything, shouldn’t you and Lizzie be a team?

We are a team. That doesn’t mean we are going to pull the same weight. When someone is disabled, it can be limiting at times.

Totally agree. And everyone everywhere could find reason to complain about their situation (even those you’d consider well-off), but even many who are very poor, don’t. Because they know that to foster that mindset always leaves you feeling inadequate and gives your power away. Start a gratitude journal with your boys – I love that you are brainstorming for solutions! Also, fostering thrift is such a valuable tool – read Tightwad Gazette (use this as your manual!), Millionare Next Door (not who you’d think), Your Money or Your Life, etc – life-changing! Living within your means is so empowering that it soon becomes a creative and fun challenge, not an infringement! There is almost always a cheaper alternative to expenditures and it becomes a creative problem-solving skill to see just “how low can you go”!
All the best to you and your family – I’m rooting for you guys!

That is hard. What about a GoFundMe? Maybe you could raise enough money to get a better car. The prices for used car are more depressed which is good if you’re broke. We could get something pretty good for ourselves for $5000. But we spent that money on my teeth instead.