Perfect end to a sh!tty day…….sigh

The day from hell……

The choices we have to make…..

Perfect end to a sh!tty day…….sigh


As I said yesterday , we were headed to Case Western Reserve University today for another ADOS for Emmett. This was to determine his eligibility for a research study. We were up, dressed and out the door on time and everything was going…well..considering. We stopped at the Get-Go (Giant Eagle’s Gas station) to get gas before we left. I was pumping the gas and I looked up. The ‘bare handed man” was standing in front of me. He was wearing the same clothes as the first time I met him. He used the exact same words. He wanted food and a trip to the shelter. He pulled all the change out of his pocket to “prove” he had no money. I looked to my right and Lizze was watching as he talked to me. She looked at me as if to ask if that was him. He asked me again for food and a trip to the shelter. I told him “I didn’t have anything”. That was the truth, we’ve had to sink EVERYTHING into this stupid van. I told him I was so sorry for not having the means to help him. I asked him if he remembered me and he said “you bought me food before”. He then turned around and left…. I cannot tell you how devastating it was to not be able to help…..

I got back in the car and just sat there for a second and tried to collect myself. We were then on our way. I was still struggling with two things now, Emmett’s appointment and now running into the “bare handed man” again. We hit the freeway and the front end of the van starts shaking. I’m “pretty sure” it just needs an alignment.  We were about halfway  there and I started to get sick. I had to pull over to a rest stop. I ran in to use the restroom, locked myself in a stall and started to get “sick”. Not 2 minutes later I hear the back door of the restroom open. In comes about 8 “ODOT” (Ohio Department of Transportation) employees, both men and women. They were doing some type of training class….right in the middle of me getting “sick”. The next thing I hear is one of them say, “Guys we have a client in here”. Not only was I “sick” but now completely mortified. What’s worse is they didn’t even stop the class when they realized I was in there. They began inspecting all the toilets and fixtures for damage. I wanted to just die. Once they left, I waited the “appropriate” amount to time to ensure I didn’t run into any of them. I got back in the van and drove off.

We get about 15 miles out and the GPS disconnects (and no it has nothing to do with my ROM). We end up all turned around somewhere in downtown Cleveland. We finally arrive and met up with the very nice woman doing the assessment. The point of this study is to investigate an intervention technique that shows promise for kids on the spectrum. Basically, this translates to MORE help for Emmett so we just can’t walk away from an opportunity to improve his future.  During the testing she was asking us questions about his development and what we are seeing at home. Emmett was in “rare form” and by “rare form” I mean completely cooperative and well behaved. Figures this would happen….sigh. During the testing there were a few things observed that are considered “red flags” that Lizze and I somehow didn’t realize were a problem. During one phase of the test Emmett was using the testers finger to push buttons instead of using his own. Apparently, that doesn’t view you as a person but a tool or instrument. It was also noticed that he only makes “fleeting and unsustainable” eye contact. After the test ended she told us she would score the ADOS and let us know if he qualifies for the study. If he did qualify for the study we would need to be back up to Cleveland on Friday morning. Lizze and Emmett both slept the whole way home. We got home and we all took a short nap before the other boys needed picked up from school. Lizze took Emmett and went to pick up the boys cause I still wasn’t feeling well. While she was gone I received the call with the results of the ADOS. She told me that Emmett was scored and placed on the “low functioning” side of the Autistic Spectrum.  I was conflicted going into this today because on one hand we already knew the diagnosis but on the other hand I wasn’t sure how I would handle hearing it again….. I’m here tell you, it hurts you just as much the second time around. At least he will be part of the study and maybe some good can come out of all this.

I was laying down when Lizze got home with the boys. Elliott was throwing a fit and had been since she picked him up. He was mad cause they didn’t have a snack today and he wasn’t going to leave until he got a snack. Lizze directed the boys to go play and she came into came into our room and shut the door so we could talk without the kids hearing. She told me about Elliott’s day and I told her about the ADOS results. Then we hear Elliott crying that Emmett was chasing him. Before we can make it out the door Gavin starts SCREAMING. Gavin is quiet dramatic so we didn’t know what to expect. Turns out that Gavin was trying to protect Elliott and Emmett bit him. When I say bit him I mean BIT him. Emmett got him right on the stomach. You can see in the picture below that it was a pretty good bit. We called Dr. H to find out what they wanted us to do. In all my years in emergency medicine I never had a bite case so I wasn’t quiet sure. They called back and wanted him seen because because he needed a tetanus shot. . So Lizze took Gavin to the doctors to get checked out while I watched the other 2 boys. Gavin was really brave and it only took 2 people to give him the shot (it can take 8 people at times).

So that’s my day so far. I think that should be enough…don’t you? 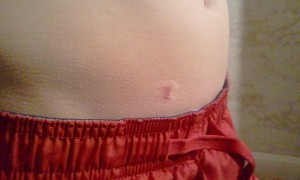 I understand this too. My second son was Dig on the spectrum too and tho we knew it, it still hurts and it opens old feelings you know? Anyone who says it shouldn't hurt so much or at all clearly has no idea. You feel how ever you want to cos its your feelings no one else s, when they go through it then they can choose how they feel and until then, they can keep it to themselves.

God Bless you on your journey.

I totally agree about hearing the diagnosis- every time we've had to re-eval I lose it again when they tell me he has autism. I always think it's so crazy for me to do, but I go through the same cycle of emotions all over again. It just doesn't get easier to hear, I guess.

Lost and Tired
Reply to  Heather

Thank you for saying that. It's nice not to be alone in something that profound….. I don't know why it's so hard to hear that again. But I get sick to my stomach, like it was the first time I heard those words…..sigh