I'm really trying to be patient -

Tomorrow is going to be a NIGHTMARE

I’m really trying to be patient

I’m going to be very honest with you all here. Even at the risk of sounding like a less than stellar father. I think that it’s a good thing to share our feelings, so I’ll lead by example.

All right, with that said, Gavin is driving me absolutely insane. God love him, because it isn’t his fault but that doesn’t make it any easier to deal with. In fact it’s actually worse.because of the whole guilt factor side of things.

Gavin is acting more and more child-like every day. By that I mean he is literally acting like a much younger child almost like Emmett..actually. The problem aside from the obvious is that Gavin is much bigger and stronger so that complicates these tremendously.

The other thing I have been noticing is that Gavin is moving much, much faster now. His movements are no longer graceful, if that makes sense.
For example, as I’m writing this, he was trying adjust the pillow behind him on his chair. Instead of simply adjusting it, he jumps out of his chair and whips the pillow around, almost knocking half the things off the mantel.

His sudden, uncoordinated movements have also caused him to fling his water bottle on to the floor at least 3 times in the past hour or so. I keep trying to get him to slow down but everytime I remind him it’s like he’s hearing for the first time…..every single time. If I had hair left I would be pulling it out right now.

Just now, Gavin dropped his pencil…….twice. so he asked if he could sharpen it. He then sharpened his pencil, only to drop it again and break it. I have to constantly remind him of things…..literally. It’s exhausting and frustrating to say the very least. It think I might just start recording the frequently used phrases so that I simply have to hit play…you know…just to kinda break things up a little bit.. Does that sound really bad to say something like that?

I just feel like a scratched record and I have run out of ways to say basically the same thing….over and over and over and over and…..sorry. Hopefully you get the point. Dammitt, there goes the water bottle on the floor again. Scared the crap out of me this time. It’s one of those aluminum ones, so when it hits the floor it makes a great deal of noise.

I’m going to quit while I’m ahead. Hopefully I have presented my experience in a way that makes sense. If not, then at least I got to vent a bit. I fear I will be having to do this a whole lot more, at least the way things are currently going. 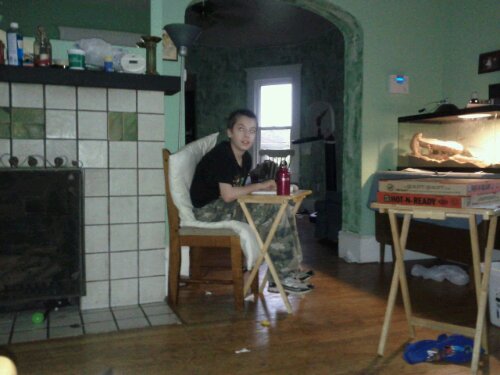 Post by WordPress for Android via Nexus S 4G without the use of proper editing tools and with the disadvantages of a bastardized version of auto-correct, seemingly with a mind of its own.

You say he’s in a manic phase of bipolar? What you’re describing is perfectly normal – to a T – for that phase. It won’t last. It has to run its course. I’m bipolar type II, which is characterized largely by depression, but I have hypomanic phases too and know what he’s feeling. We can get almost childlike, giddy, move too fast, our coordination and depth perception is off. We’re fidgety. Lose sense of time, meaning what is mere moments to you feels longer to us. Take your frustration and multiply it a few times…that’s what it feels like to be Gavin. Whether he has a smile on his face or not, it isn’t fun to be Gavin right now, Dad. He isn’t feeling good. It’s not comfortable. He’s constantly moving because he isn’t comfortable and can’t get comfortable. Get it? He’s aware of your frustration and is probably waiting for you or someone else to snap on him. Give it time and keep telling yourself “It’s just for now, it’s not forever.” My girl was autistic and had brain damage so I know all about repeating myself every minute or so, or every ten or thirty seconds even, knowing to her it was like I never said ‘it’ before. And she had coordination problems so yeah…know all about your frustrations there. I hear you! Gavin looks like he’s at the age where all boys get awkward and uncoordinated, btw. It can certainly be very exaggerated by his conditions, but he looks like he’s all limbs! LOL Stick with it and know that you’re not alone. You are not the only parent who is screaming in his head because his son/daughter is doing repeatedly annoying things/noise-making. My daughter would make progress and then regress and the regression was SOOO hard to take, but then she’d make progress again. She regressed the minute school was out for summer, by the way. Summers SUCKED! She needed the daily structure of school and the whole routine around it…getting up at a certain time, getting ready, getting there and back and on and on. Again…he’s not comfortable and it’s why he is the way he is right now. Remember that.

*sighs* I can feel ur frustration , I have an 18 years old Autistic brother and its really hard to get him to listen to you. Plus, add to that the fact he started to become a rebel. I would say you have great patience , Kudos keep it up. I usually run to my room so I won’t get angry coz it makes things worse (he is really sensitive).

Did you try getting your son an ipad?

I've said to my hubby many times, that we should be able to record a few phrases to broadcast through a bullhorn. I almost caved and bought one a few weeks ago. The repetition is maddening at times. We have 2 boys, ages 8 & 5 on the spectrum. It's not just you that gets frustrated. 😉 Hang in there!

I completely get where you're coming from. I have felt that way many times with my CDD kiddo!

I've had that exact same thought about my son! Of course, he's 3 and has ADHD so the circumstances are different, but the frustration is the same. No sooner than I say something to him, he forgets it and then I have to repeat myself over and over again. Having a mini tape recorder around would be very handy indeed!
My recent post Beauty's in the Hospital – UPDATED

"I might just start recording the frequently used phrases so that I simply have to hit play…you know…just to kinda break things up a little bit.. Does that sound really bad to say something like that?"

Not in my book, Sir. I say it. I have three boys living without autism. It's OK to get frustrated and it's OK to vent. We all need it, and you probably deserve it more than most.

I happened upon your blog, liked you on facebook, and follow your posts. I think you are wonderful; your blog speaks to me in a very real way. I know we don't know each other, but I pray for your family daily. I hope that is OK.

Thank you very, very much. We can use all the thoughts and prayers we can get. Thank you for your support. I really appreciate 🙂