We came home from the boys doctor appointment yesterday and discovered this grizzly scene.

Apparently, the at some point while we were gone, and Maggie decided it would be a good idea to play with Emmett’s Jumbo Crayola Crayons.

Sadly there were few survivors.

After seeing what had happened and enduring yet another trip to the pediatrician, Emmett looked at the crayon carcasses and angerly said, and I quote…….. “dammit Maggie, Emmett’s crayons”..

What can you say to that? On one hand he should not have said that but on the other hand he actually said that..

Also, the of you look carefully you will see how Emmett chose to deal with it. 🙂 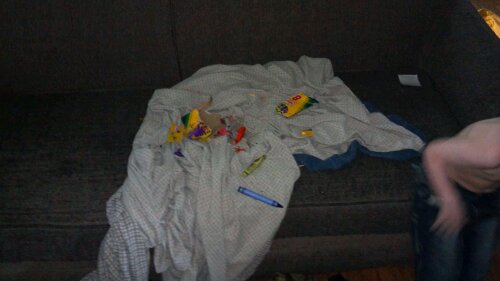 Oh – he SAID it! That's wonderful. But carnage, oh my.