Keeping kids out of the refrigerator


I have mentioned before that I think animals can have such a positive impact on children with Autism.  They seem to form a very deep connection with special needs kids in general.  I honestly don’t know how this bond is formed,  especially when connecting with other people is such a struggle at times for some kids on the spectrum.

I wanted to share a picture with you all today of just how this appears at times.

Gavin had another massive meltdown this morning.  Something to do with Legos is my best guess.  Sometimes I don’t know why we are having a meltdown in the first place as Gavin can’t always articulate his feelings.

So Gavin is having this meltdown and the entire time Maggie is sitting there with him.  It’s like she is his little guardian angel.  She just sits there patiently waiting for him to regain his composure.  If he begins to get to aggressive,  she will nudge him and he will respond positively.

It really is an amazing thing to watch.  I think that Maggie is much smarter than we give her credit for.  I truly believes that she knows that Gavin is special and so she instinctively knows how to comfort him without really doing much of anything.

We rescued Maggie about 3 years ago,  in fact it will be three years this December. She was seized in a raid on a fighting dog ring.  She had been badly abused and still has the cigarette burn scars in a few places.

She sat at a shelter for over a year because no one would give her a chance due in part to her appearance.  She looks very aggressive and I think people were afraid of her and made assumptions based on appearances.

We stumbled upon her picture online and searched until we found her.  We went up that night to meet her and ended up bringing her home that day.  She is a total sweetheart and has never been aggressive towards people or animals.  She was forced to do things that clearly went against her nature.

She was a perfect fit for our family.  She needed us as much as we needed her.  We saw in her what other people missed because they didn’t look beneath the surface.  We know first hand how that works.  My kids are judged all the time by people who won’t give them a chance.

Maggie is a blessing to have around and illustrates perfectly why you should never judge a book by its cover. Who would have thought by looking at her how amazing she would be with kids and how deep a connection she would forget with my kids. 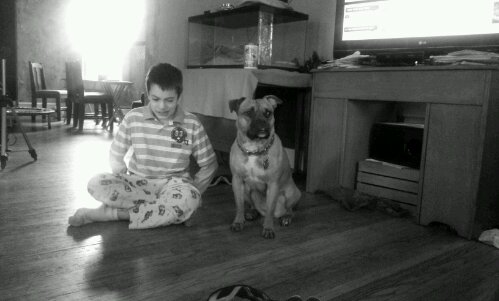 Yeah, animals have always been important to me. I remember one day in college I was particularly upset–I walked downtown and went into a shop just to stroll around and cool off, and the shop cat followed me all the way around the store purring at me, jumping up and down all over furniture and stuff in order to stay right by me. Stereotypically like Temple Grandin, I've always been able to read animal moods and intentions much more easily than human ones.

Another friend who has Asperger's as well as dealing with a physical disability right now noted that dogs seem to be able to intuit her weaknesses and accommodate her in their behavior. Like a big dog will come bounding towards her and seem like it's going to knock her over, but will then understand in time that she's not steady on her feet and knock it off.

I absolutely love this! It's so true how animals just have a way of knowing who needs a little extra love =) They're amazing and I'm so happy your family has such a special dog!
My recent post No News for Wednesday

Great post! It breaks my heart that people would treat animals like that, your family is amazing for rescuing that sweet dog. We have a guard cat named Simon. He is really good for our son; if he starts crying or gets upset, the cat runs in and makes sure everything is ok. Pets are fantastic. If I am in pain, Simon will sit on wherever I am hurting and purr. We love our cat. 🙂

My wife has the same relationship with our cat. When she has a migraine or just a bad fibro flare, Cleo will either lay across the back of her neck or across her lap and just purr. It's always seems to help Lizze and it also lets me know when Lizze isn't doing very well.

Sadly our daughter has got a real fear of dogs.:o(