Emmett and I have this thing.  We play a game where we take turns getting each other’s nose,  ears ect..  I used this as a fun way for him to learn the parts of the body.  I figured that this could help him when something hurts in the sense that he could tell us where he hurts now.

So the other boys have gotten in on this and of course it’s gotten a bit out of hand.

Anyway,  Emmett was sneaking up behind me so he could get my butt. One of the things his brothers have added to the game.  As he was about to do this I turned around and grabbed his hands.  I wanted to redirect him into something more appropriate,  like,  standing in my foot and I would walk him around.

However,  as soon as I did this Emmett decided to be goofy and went limp.  I didn’t want him to fall so I held his hands.  Emmett loves hanging like this so he started kicking off my legs and swinging. I almost never do this because I afraid that they will get hurt or something will pop or whatever.

Well apparently,  what I had been trying to avoid happened and Emmett popped his elbow.  He was crying and in pain.  We could touch him without him screaming.

When he was hanging by his arms wasn’t for long and its not like there was a great deal of force.  He was just goofing around.  Well because Emmett has loose joints I guess it’s easier for his to happen.

Long story short,  we got him to the ER but at some point Emmett had popped it back in himself and was feeling much better.  They called is Nurse Maids Elbow and examined that sometimes that will happen and it popps back in by itself.  So Emmett is doing fine now and this will be brought up at the next OT appointment.

Does this typically or rather is it more common in kids with these types of loose joints? COUGH couch Julia couch COUGH.   😉 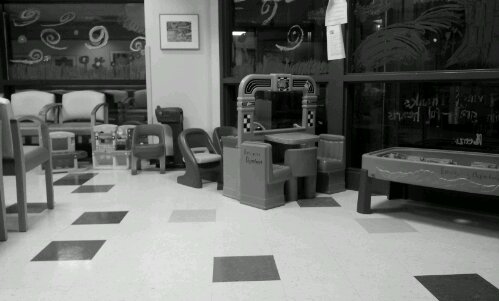 This actually happened to both my boys – but neither of them went back in by itself. With my oldest when he was 2 or 3 he was goofing around with his dad and suddenly started crying and went limp. When I felt up and down his warm he told me his wrist hurt. I hugged him and "kissed him better", and he said he was better. For the next 3 days he insisted he was fine because "mommy kissed it better", but still wasn't really using that arm. Took him to the ped.who immeadiately dx nursemaids elbow and said "we don't usually get those in here they usually go to the ER because the kid is cyring so much", that made me feel really bad ! She out it back in and he was fine. Then when my younger son was 2 the same thing happened (again playing with dad), I made my hubby take him straight to the doctor (huuby was really embarrased that he'd done it to a second kid ). The older one is normally developing, the younger one has hypotonia and SPD (and was globally delayed at that time but now caught up pretty well). So I think it happens pretty often with all kinds of kids, Glad he's feeling better

Well, I am glad he is ok! When I was about 12 years old I was chasing my little cousin around the yard (she was about 2) She tripped right in front of me, which caused me to trip on her and actually fell on TOP of her! I dislocated her shoulder. I felt SOOOO bad! I think I was crying more than her! LOL <3

Hi Rob, none of my kids have ever popped joints out. I think this kind of thing is fairly common but I imagine it would definitely be more common in kids with poor joint stability. I'm glad it resolved itself so easily and Emmett's feeling better!

Its actually normal I myself have loose joints. When they first pop out it does hurt but as time goes on and the more they pop in and out the less it hurts and the easier it is to get back in. The elbows seem to be the most commom area but watch for knees and hips as well.