I know that some of my readers feel that we are too hard on Gavin.  That the rules we have implemented are too strict or even cruel.

While I have stated countless times, the reason behind these rules, it still seems to fall upon deaf ears.

Today was a perfect example of why we have to have rules like this.  It’s so important to remember that there is a rhyme and reason behind everything that we do, even the stuff that is difficult to understand or that on the surface, appear mean or cruel.

Keep in mind that what I’m about to share with you is not a result of Gavin having a tantrum or being upset.
In fact, to the contrary, Gavin was having a great time and was the farthest thing from angry he could be.

We were watching TV this afternoon and something came on that was funny.  Everyone was laughing and having a good time.  Gavin on the other hand was getting out of control.

Several times we had to remind him to keep himself under control and settle down.

Every time we had to repeat ourselves and so we had to send Gavin to his room to calm down. When he came back down and reentered the room and began watching TV with us again, it began again. We was once again out of control and flinging himself around as he laughed uncontrollably.

As he was bouncing up and down in his chair, this is what happened. 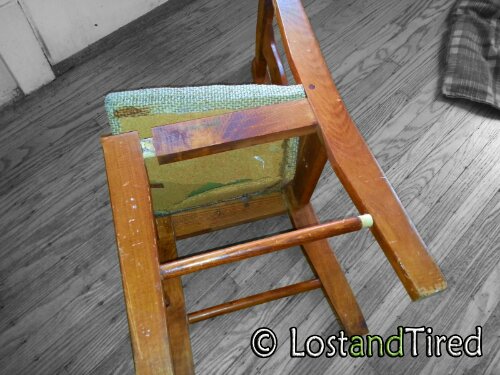 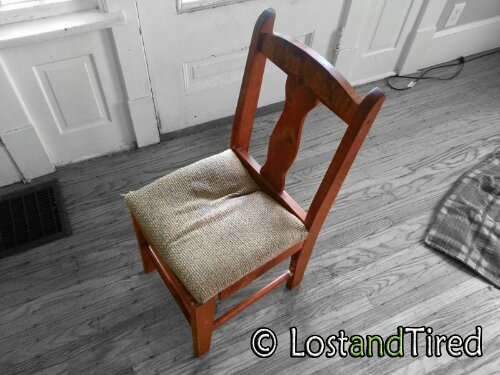 As you can clearly see, Gavin killed the chair.  He wasn’t upset or angry.  However, he’s not only dangerous when he’s angry.

Gavin has almost no ability to self regulate and so he simply escalates until something like this happens, unless we shut him down first.

This is one of the reasons that we have to limit his excitement and supervise all contact he has with his brothers.  Not only do we have to worry about his violent rages, sexually inappropriate behavior or his attempts to manipulate everyone around him, we also have to worry when he simply gets excited.

Deciding whether or not to hold him accountable for causing this kind of damage is difficult because he doesn’t always do it on purpose.

However,  at the same time, he’s told to settle down or not to do something and it doesn’t happen.

Challenging, frustrating and exhausting…. Welcome to my world.

KyahJ thefuzzycabbage @Kathy Wolf Murray @Alison Moorcroft @Lisa Shuey @Amy Brunelle-Myers @Kelly Hafer thanks everyone.  You’re absolutely right when you say that people don’t get it unless they experience it first hand.  Most people meet Gavin for the first time and simply can’t believe the stories we tell them.
It’s nice to know that there are people that get it.

Just last week my fourteen yr old lost it in his sisters room, holes in the wall the lot, so I totally get it.

Rob, I don’t have children, but I worked in a home that was a treatment center for kids like Gavin. I understand why you have to do what you do with Gavin. Many of the kids there also had strict rules & consequences for their behaviors. I’m sorry that so many people give you such a hard time. They don’t get it and never will unless they experience what you do with Gavin.
Love & prayers for all of you!

While I’ve never had to deal with people thinking I am too strict with my son, I have had to deal with people criticizing me because they think I am too easy on him. They see him throwing a tantrum in the store or running around like a madman, and they tend to think I am a pushover who spoils him and gives him whatever he wants. These people have absolutely no idea what it is like to raise a child with special needs, so it can a bit irritating when they offer their unsolicited advice. And there are rules, but these people don’t exactly know what goes on 24/7, so they really have to room to judge.

Now that Thom is getting bigger, I totally understand why you have to do what you do with Gavin. I am totally right there with you. And I do understand.

I understand completely. Have had all the same issues with my daughter. If you don’t live it, you don’t get it …… God Bless

I honestly do not think some people have context. Until someone is an actual witness to this type of behavior, or until they see a video, they simply cannot grasp it. Most people automatically apply information to what they know. For instance, my children do not need that level of structure. They have the ability to self-regulate more and more, as they mature and as they grasp consequences. However, I do know what my youngest Aspie/ADHD behavior looks like when she is over-excited. Even at her worst, it is more of a frenzy of energy and hysteria. It is not destructive. It might bother someone else based on the noise level or the visual chaos, but no one would be in danger. Your situation is entirely different because you are dealing with a child with an entirely different diagnosis. Most people have not witnessed others with the same diagnosis…I suspect
that families like yours don’t have the luxury of venturing out into very many public situations. Too much stimulation. I have always believed that we should spend less time judging the situations/decisions / routines/behaviors of others, and more time appreciating that each of us is on a unique path. We have our own challenges. We have our own burdens. We have our own worries keeping us awake. My oldest has had some pretty serious mental health issues this year, and we had to make some excruciating parental decisions. Most people did not understand. They might have thought we were over-reacting or creating drama. But not one of them saw what we saw or heard what we heard. Not one of them understood because they could not even imagine it. All of our family is long distance. They were the least able to comprehend. I finally reached the point when I knew I had to do what was right for our family at that moment in time. And the doubters needed to keep their opinions to themselves. If they wanted to be supportive, great! If not, I shut them out. Just keep on, Rob. There so many people out there who don’t get it. And, frankly, they don’t want to get it. Too much truth and reality just makes them uncomfortable. Those are the people who waste our time giving us unsolicited advice and criticism. It sucks to get kicked when we are down, but it is the risk we run when we go public with our stories. Haters are gonna hate! I read your stuff all the time, and I have told you before, when I am feeling sorry for myself, I just read your stuff to get a good dose of a harder reality. I start being able to see what I have to be thankful for. Are your sure your name isn’t Job? Just sayin’….

Unfortunately, we face the same short term memory issues when it comes to educating some members of our family

My mom stayed with us for six months while our baby was born. Before she left, she said she finally got it. That is wasn’t “mean” but necessary. It was good to hear. (Of course, six months from now when the meltdowns and broken stuff is forgotten, I fear the lesson will be, too.)

I’m sorry you can relate but I have to say that it’s nice to have someone get it. 🙂

I can’t tell you how many times I have told family, “I know it seems like we are being mean to him, but…” I get this completely. Broken furniture and all.