Update: I thought it was important to mention that these work great on neurotypical kids and adults as well.

I have written many, many times about the struggles we encounter trying to bathe our 3 boys on the Autism Spectrum. Gavin, our oldest has been taking showers for years and does very well with them. Elliott and Emmett on the other hand, have many sensory related issues in general but especially with the water. They will actually sit in the bath tub but they will not tolerate water touching their hair, ears or face. We have tried everything from goggles to ear plugs and nothing ever made a difference. 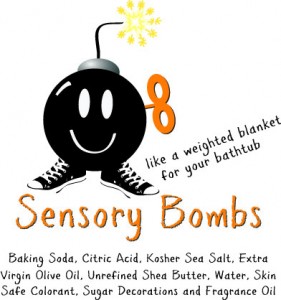 One of the other issues we deal with is Eczema. The boys tend to have more problems with dry skin during the Winter months. Trying to put lotion on them to help prevent this, is not a pleasant experience….for anyone. Most of the time they will literally run away screaming. It’s totally a texture thing, as they don’t like the feeling of the lotion on their skin.

One day I received an email from Jillian. She had been reading about these difficulties and wanted to send me some Sensory Bombs, in hopes it might help the boys. I’m a special needs parent, that is exhausted and overwhelmed by these struggles. I was willing to try just about anything too provide my kids with some relief and make our lives, just a bit easier.

I gladly excepted the offer.

Within a few days, we had a box of Sensory Bombs show up in the mail. I wasn’t sure what to expect, I mean Sensory Bombs, the name didn’t really give me much to go on. I read the ingredients and the Sensory Bombs contained only the following: Baking Soda, Citric Acid, Kosher Sea Salt, Extra Virgin Olive Oil, Unrefined Shea Butter, Water, Skin Safe Colorant, Sugar Decorations and Fragrance Oil.

Upon examining the Sensory Bombs closer, they sort of resemble a giant jaw breaker. They are very colorful, some even had sprinkles and sized just a little smaller than a base ball. Each one had a unique fragrance, that while present, wasn’t overpowering.

I thought, what the heck, we’ve tried everything we could think of to help and nothing worked.

Emmett, my three year old, happened upon me examining the contents of the box. When he saw what was inside, he immediately thought they were balls. He wanted to roll them on the floor but I explained to him what they were for. 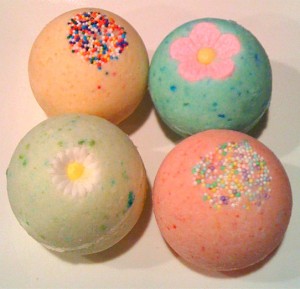 I asked Emmett if he wanted a tubby. I told him that these balls were for the bath tub. He heard that and it peaked his curiosity.

Emmett and I filled the bathtub with water and unwrapped a green Sensory Bombs (which happen to be Green Apple Zapple). As soon as the Sensory Bomb hit the water, it began fizzing, much like a little volcano in the bath water. Emmett didn’t miss a beat, he jumped (carefully) right into the bathtub. He thought it was the coolest thing ever. The fizzle lasted a few minutes and the Sensory Bomb was gone. However, the water was now green, which Emmett thought was cool and the pleasant fragrance was actually kind of relaxing.

The oils in the Sensory Bombs made the water bead off his skin and he loved that. He played for a few minutes in the bath water. Then I washed and rinsed him off, including his hair (which was not green) and he got dried off and dressed. His skin felt really soft, as the oils had helped to moisturize his skin..without the need for lotion.

Elliott has enjoyed the same results as Emmett, using a Sensory Bomb the bathtub. He felt relaxed enough that bedtime was even easier.

Something that you do need to be mindful of is that, while Emmett wasn’t slippery himself, the bathtub was. So PLEASE be careful not to slip.

How do these work

I’m not entirely sure how or why they work, but Emmett took a bath without a fight….so that’s good enough for me. However, since this is a review, I should be a little bit more descriptive.

Sensory Bombs are calming tools that offer a highly effective sensory experience. In essence, they are like a weighted blanket for the bathtub; they make the water heavier and provide evenly distributed pressure that “hugs” the muscles and joints. As a result, the child is relaxed, moisturized and able to transition into a restful sleep.

Actually, that really makes alot of sense, when you think about it. It does provide pressure, similar to that of a weighted blanket. Plus the kids love the process of the Sensory Bombs dissolving in the bath water. My kids are now seeking out this experience, which to me, says that it works very well for them.

How do you get your hands on some Sensory Bombs?

If your interested in trying Sensory Bombs they can be purchased at Jillian website: Autistic London, Unlocking Our Ewok. Click on the Sensory Bombs link at the top of the page. Also, you can read their very moving story of life with London as well. I think that so many of us can relate.

Jillian is also going to sponsor a give away here, on Lost and Tired.  She is going to give away 5 Sensory Bombs to 3 lucky readers.

Stay tuned for the Giveaway. It should be posted later today.

How do I order

Who'd have thought that a simple thing like bath fizzies / bath bombs would be such a help to kids on the spectrum? 🙂 I'm glad you have a new tool to help you out! Bath fizzies are actually pretty fun to make. Messy, but fun, and they can be a challenge to get to hold together. Good luck!

I love the idea of these but:
1. We can't use anything with shea in it (nut allergy).
2. We find that so many scented products are over scented and cause asthma symptoms.

I should make my own. Think I'll search online for a How To.
Thanks for the idea!
My recent post Keep Your Mind Open

Liz, go to Jillian's site she has the whole process outlined so you can make it yourself.
My recent post Novelists and Freelancers a Partnership for Success

These sound awesome! My son also has issues with getting his hair and face wet. If these would help that would be fantastic! I'm going to have to look into these and hope that I can squeeze them into my budget.

I followed up with Jillian's husband Matt regarding a post he made about the sensory bombs. I've been looking for anything to help my son relax at night before bed.

We got our box, and I waited a couple of days before I tried something new. I wanted to wait for him to be in one of his better states of mind. He got in the tub and loved watching the fizz of the bomb, and at 7 he felt the need to dissect what was going on, so every few seconds it was "no, put that back in the water, it won't dissolve in your hand." He would laugh at me an tell me it was, he could feel it. His hands were wet but he loved it anyway. So, instead of being fearful of a new sensory sensation, he embraced it and would like to know when he's getting more. I'm going to be putting these in our regular monthly budget.

Every night he's bathed with a sensory bomb first, he's had a settled night's sleep. He's also tried to analyse why they work (fizz) like they do. I don't plan on giving him the answers though. 🙂 Not yet anyway.