Biting off more than you can chew

We had a small birthday party for Elliott last night. While it wasn’t without its problems,  I think it was mostly a success.

We ended up with like 20 people at the party last night.  We had cake and ice cream sandwiches -which incidentally,  we forgot to put out- and basically kept it simple. Regardless of how low key we kept it,  Elliott was still overstimulated.  He requested that we not sing happy birthday to him.  🙁

After everyone left,  Elliott had a huge meltdown because he didn’t want to go to bed.  Lizze and I spent about 25 minutes trying to calm him down before he went to sleep.

Emmett spent the night at Grandma’s house after the party and will be returning shortly.

My little sister even made it.  She is doing better and the return trip to the hospital showed that the swelling in her eye is not related to anything else.  She may need surgery to fix her sinus cavities but that’s to be determined.
Thanks for all the thoughts and prayers for her.

I would also like to thank Betterment for making the party possible by providing us with the gift certificates we used to get what we needed.  Thank you so much for everything.

Thanks to everyone for all the birthday wishes sent Elliott’s way.  🙂 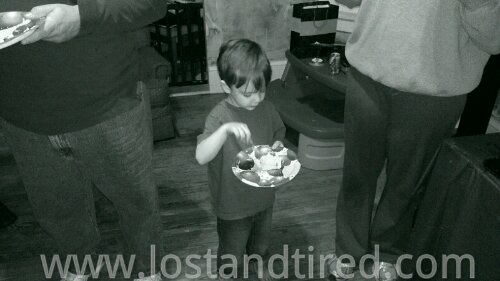 Elliott didn’t want any pictures taken of him last night so I grabbed one of Emmett instead.  He looks so grown up..