9th Antibody Infusion: A bit on the rough side


Elliott’s appointment was pretty straight forward.  They got a detailed history and reviewed the EEG. I chose to go with Elliott first because he was the easiest or least complicated.

Elliott was very well behaved and just played his 3DS for most of the time. The doctor was totally awesome and was great with the boys.  You could tell that he loves his job.

Now for the bad news.  Elliott had 2 small seizures during the 5 minute sleep part of the EEG.

Before we explore medication,  we decided that it would be best to do a longer study so we could qualify what was going on. They are going to schedule a 24 hour VEEG.  This will provide more detailed information and we’ll have a better idea of whether or not he needs medication.

I hope it turns out to be minor enough that he won’t need intervention,  however,  I’m at the point where I just want him to get relief from whatever is happening.

They also talked about some expansive genetic testing to see what’s going on.  Just more to add to the list of things to do.  🙁 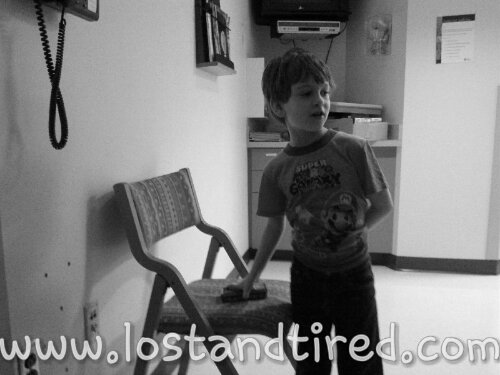