It's a "Serenity Prayer" kinda day -


Today is turning into one of those days where Serenity Prayer is running through my head, over and over again, like a scratched record. Gavin is not having a very good day and is absolutely driving me nuts. He’s having one of those days were nothing is going right and it’s mostly because he’s going everything so fast and not taking the time to think through what he’s doing. In other words, he’s being extremely impulsive today  and it’s not working out very well for him.

Gavin is also being very repetitive today and dealing with a lot of cyclical thought. Basically, that means he is almost 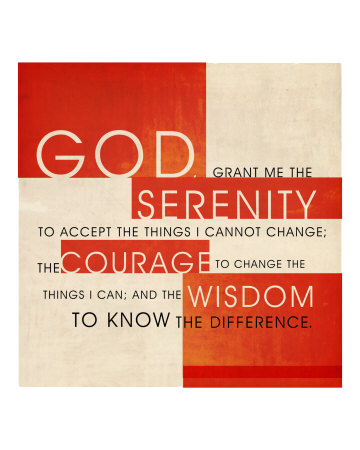 To be completely honest, it’s maddening to listen to.

I’ve tried to work with him on this today but nothing is helping. I’ve told him that he can think about, quietly and to himself but not out loud. That doesn’t work. I have also told him that I would set aside a certain amount of time where he can talk to me about food. I thought for sure that would help, however, it never worked in the past and it still doesn’t work now.

I mentioned the impulsive behavior earlier. While we were eating lunch, he wanted to put mustard on his turkey sandwich. We told him that would be fine but had to remind him to slow down, once again.

Lizze and I were still in the kitchen getting some fruit for the boys when Gavin began to put mustard on his sandwich. He began moving really fast again, and decided to shake up the mustard with the lid off. Mustard flew everywhere. All over the table and floor. I had to speak with him again about slowing down and honestly, I’ve lost track of how many times I’ve had that same talk with him today alone.

I’m not superhuman and I can only repeat myself so many time before I just don’t want to do it anymore.

As I’m writing this, Gavin is in the dinning room having a meltdown because we finally had to tell him to just stop talking. He started to freak out and eventually lost his TV for the afternoon. The very act of holding him accountable, led to the meltdown that I currently have front row seats to.

All I can do at this point is hope that maybe I just haven’t said the Serenity Prayer enough times to make it truly effective. At this point, I’d settle for slightly effective. Maybe it just needs time to get warmed up or maybe it’s just out of service this weekend. Either way, the fact remains that it’s not working and I’m losing my mind.

It’s most definitely a Serenity Prayer kinda day in the Lost and Tired household.

We'll all say it together…maybe that will help. Incessant talking is a nerve jangler, alright.