End of our rope


Elliott just came home from Cleveland tonight and wanted to know why Gavin isn’t coming home. We never told Elliott that Gavin was going to the hospital.

Elliott was surprised to find out that Gavin wasn’t home.

How do you explain to a 6 year old little boy with autism,  that his big brother is locked up in the psych unit?

I’ve never had to do that before and I wasn’t sure what I was supposed to say. I aways dislike moments like this because no matter what I say,  Elliott is going to be upset.

This was my explanation to him.

I wanted to make it something that he would understand and relate to.

I told him that Gavin is sometimes like the Hulk. I explained that when Gavin gets upset he turns into the Hulk,  just like Bruce Banner. The Hulk is angry,  scary and smashes everything. However, when he meets the Avengers, they teach him to control his temper and use his powers to help others.

I told Elliott that Akron Children’s Hospital is helping Gavin to learn to control his temper and use his powers for good just like the Avengers did for the Hulk.

The Avengers helped the Hulk to not be so angry or scary to those around him.  The doctors and staff at Akron Children’s Hospital are trying to do the same thing for Gavin.

He accepted that answer but was still crying.  He wanted to camp out downstairs because he doesn’t want to be alone.

Looks like Daddy’s camping out in the living get room or cell again.

I think I did okay with my explanation and hopefully Elliott will feel better in the morning.

I don’t think people realize just how big the impact is on the whole family when something like this happens.  Everyone is affected and everyone is hurt. 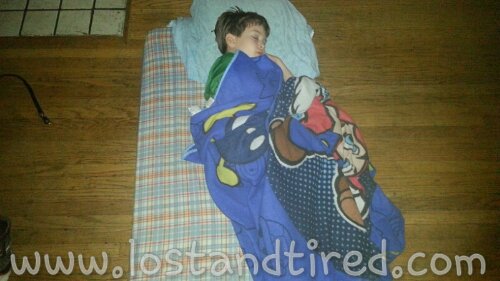 Wow…. I just got back from being away for the weekend and am catching up and I'm just so sorry this is happening. But you do have to think of the safety of you, Lizze, Elliott, and Emmett and that's what you are doing. That explanation for Elliott was just so wonderful. Praying for you guys, as always.

Thank you. I appreciate it.

I know you may not feel like it but you are doing an awesome job at being a great dad. With everything going on with Gavin you have been able to remain calm for your other children and the explanation was right on for the developmental level of your other boys. I can only hope that over time your family can be together again and that you and Lizze stay strong and united in love together.

My heart breaks for you and your family. Thoughts and prayers your way.