When your child is afraid to go to sleep -

When your child is afraid to go to sleep

Elliott is afraid to go to sleep anymore.  For some time now, Elliott has been shaking in his sleep.  The shaking wakes him up and he immediately has the sensation of falling.

This terrifies him and understandably so.

He’s been checked out my the neurologist because there was concern that these were actually seizures.

However,  as it turns out,  this is a phenomenon that is relatively common in kids and is usually out grown. Basically,  what happens is that Elliott‘s little body is purging excess energy. Think of it as a spring being pulled and stretched out. At some point,  the spring can’t stretch anymore and there is a release of energy as the spring comes back together.

I don’t know of this is more common in kids on the #Autism spectrum. I just know that this holds true for Elliott.

Tonight was one of those nights that he was stalling at bedtime.  He was doing everything he could to delay going to sleep.  He wanted to sleep next to me and this went on for so long that I missed walking tonight.  🙁 Having said that,  I couldn’t leave him like that.

He wanted to squishy couch tonight in the worst way.

He explained that when we squishy couch,  that it’s impossible for him to fall anywhere because he’s surrounded.

I thought that was pretty darn profound for a 6 year old to come up with.

He did eventually fall asleep and is still sleeping.  This poor kid just can’t relax.  Hopefully tomorrow is going to be better. 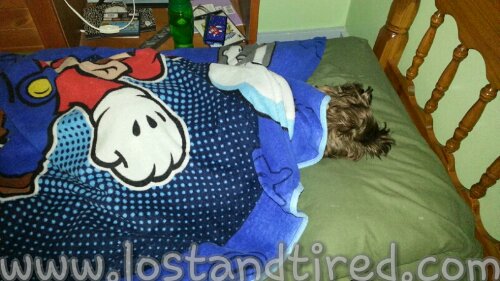 @SealyUK thanks for the RT, I really appreciate it. I can't wait to replace out horrible, pain inducing queen with a Sealy 🙂 Someday.

@Lost_and_Tired Hi Rob, our pleasure. We hope you have a painless weekend ahead of you.

@SealyUK thanks again. You too. 🙂

Pool noodle under the sheets on either side of the bed so he cannot fall out?

@MeganCKitchen I just saw a picture of this on Facebook! Brilliant idea!

@Chloe123  @MeganCKitchen I know right. This is awesome and will hopefully work 🙂

Another idea I had was how about a bed tent? Or would that make him more anxious?

@Chloe123 We used to have one of those. Thats a really good idea. I'm going to have to see if I can dig that out. 🙂

Also, could you please email me your address again. The boys have some pictures for you 😉

Maybe you can get the toddler bed rails and put it on his bed for him, to simulate the security of not being able to fall out of bed?

We are looking into that today. I have to go to Walmart and see what they have for twin size beds.

Rob, sometime the energy thing happens to me. The rest of my body is tired, I know I need to sleep, but it just sort of feels like there is an energy surge going through my body, especially in my legs. I take night time meds to help me sleep, also melatonin. Another thing that really helps for me is my weighted blanket. It helps "ground" me and helps fall asleep. Also sometimes it is hard to "turn my brain off" and go to sleep, calming down for sleep if that makes any sense.

@Chloe123 I think the weighted blanket idea is a good one. He's never really liked the pressure thing but this may help him to at least feel like he's not going to fall off the bed. Thanks Chloe 🙂