Lizze's Autonomic Journey: What we learned -

Lizze’s Autonomic Journey: What we learned

I want to apologize because I meant to post this on Wednesday but the whole Bella thing….
Anyway,  I wanted to let you all know what we learned from our trip to the Cleveland Clinic. As you know,  Lizze was there Wednesday for an autonomic evaluation..

Here’s the long and short of it.

Basically, she seems to have some autonomic dysfunction but very minimal.

We also learned that it’s very unlikely that any of her many symptoms are related to autonomic dysfunction at all.

They are however,  very concerned about the medications that her current neurologist has her on.  This of course, has been a major concern of mine for quite some time now.

They feel that until we get Lizze’s 8, almost 9 month old migraine under control there’s not much we can do. That has to be the priority and Lizze and I both agree with that.

The other thing we were told was that she needs a fresh start.

This goes back to the medication concerns again.  I can’t stress enough how much they were concerned about her medications.

Bottom line, she is transferring her care to the Cleveland Clinic.  Unfortunately, she can’t get into the headache clinic until the end of November.  So,  for right now, we aren’t burning any bridges because until she has her new doctor, we can’t lose the one she has now.

Lizze really,  really liked the neurologist we met with, as did I.  He spent the better part of 2 hours with us. He treated Lizze with respect and should great concern for her suffering.

The absolute best quote we took from this appointment was when we were discussing the medication concerns.  The neurologist said that no one likes to contradict what another doctor says or does however,  “even good doctors can do stupid things”.

While we still have a wait ahead of us,  Lizze feels good about the appointment and the information we were able to gain from this meeting. 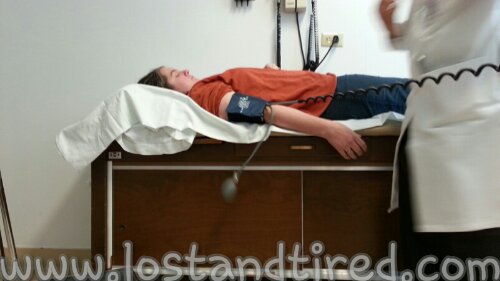 @MBee We see a neurologist for migraines but doctors recommend that you take breaks from meds as they can cause rebound headaches.  I take beta blockers daily to prevent them from occurring, but try to take a more natural route for treating the ones that are in process.

@Batty
I don't go to a dr – I get 'bad headaches' with some of the other classic migraine markers.  (ie, I may be sick, but usually don't need to block all light, I never avoid the kids/activity)  Hubby thinks I am too stubborn to admit I am sick and give in to the symptoms.   But, I knew the connection with the caffeine and had read about peppermint oil but since I'm not bad, I haven't messed.  I think my headaches are more stress than anything else.

@MBee I had my first migraine at 7 or 8 years of age, but never was treated for them until age 40.  I went back to school then and had children developing serious problems like seizures, brain tumor, etc,  and the migraines really jumped up.

Whenever I see a commercial for a drug and they start spewing the side effects, I often find myself thinking that just having the condition is better than taking "meds" for it!  I'm so happy Lizze is going to have a compassionate and genuinely helpful doctor.  I do hope that she's able to cut out a lot of her meds because the cocktail combination might actually be a large part of her problems.  I really hope she's able to find some relief soon.  Hang in there, Lizze!

Love the drs quote. So true. Best thing I ever did was change drs when our ped told us our immunologist was a quack. I should have known when I had to assure HER that everything would be ok when she gave us the Down Syndrome diagnosis. Can't say enough about 2nd opinions, but your also right about not burning bridges.

Thank you Ella. I really appreciate it. You are so right about the meds. 🙂

@dotdash Lizze is on a TON of meds and I mean a TON of meds. They were concerned that her doctor hadn't referred her to someone better because he has her on way to many meds that aren't working and some may actually be contributing to the problem.

@Batty You broke a migraine with a peppermint patty and coffee?  That will be my go-to treatment from now on.  🙂

After all, it is medically recommended.  (you did recommend it for a medical problem, didn't you?  ♥  )

– disclaimer.  Yes, I know I should see a dr and take everything on the interwebs with a pinch of proverbial salt.  You know you should do the same.

@lostandtired  @MBee It is what we use all the time now!  I will go to drive thru coffee place and order a shot in the dark 3-4(espresso shots in dark coffee) and then a shot of dark chocolate syrup!  Peppermint candles, peppermint oil on the temples, peppermint shower gel or bubble bath.  But I have gotten so lucky that I now have visual migraines and paraesthesia (numb on the right side of my body) and nothing seems to help that.  I have some numbness somewhere on the right side all the time.  Usually lips & tongue or right thumb and forefinger.    Lucky me!  :O)

Sounds like a good start.  Cleveland Clinic is where my son's neurologist moved to for her practice from Akron Children's this summer…..we're bummed 🙁   She is VERY good.   We went to our Akron Children's NeuroDevelopment appointment a couple weeks ago and the new neurologist we were assigned to wasn't even there that day, so we had a clinician and it was "ok", but I left thinking we need a do-over.  It's just CC is kind of far to haul both boys which is what we end up doing.  But…I'm re-thinking this.  Mark also lost his best speech-language therapist at Concorde Kids this late summer…..TOO may changes for a little autistic boy and his mother trying to smooth it all out for him….

@DLaubacher The Cleveland Clinic is worth the drive. Dr. Delehaunty (sp?) is at Cleveland now as well. Who did you lose at Concorde Kids? That's where we go as well.

@lostandtired Dr. Carol Delahunty was Mark's doctor that moved there.  And we were seeing Missy at Concorde.  She was there for 14 yrs and is a personal friend so we are missing her for sure — she really helped Mark so immensely.  I know there are other good speech-lang. therapists there and we will head back eventually.  Just giving Mark a break this fall,  as he had a very sick summer to begin with (lost 10 pounds)…battling cryptosporodium 🙁    I might be able to get my Ocd/driving phobia son to go to CC — how long a drive for you Rob?  And is Delahunty doing regular neurology (pediatric?) up there too?

My thoughts are with Lizzie today.  Nice to find a compassionate doctor.

The neurologist I saw in at my evaluation at the CC was Dr. Barron. He was very nice and professional. During our appointment he asked about every single headache I'd ever had in my entire life.

It's too bad they didn't find the thing they could treat to help her.  That would have been so great.

What medications is LIzze on that they are concerned about in particular?  Or is it the combination that is worrisome?  You read so much these days about interactions between medications.

Oh Rob—I know you both are so happy to have a new chance for Lizzie to get some relief.  I do the migraine thing and so do my children; one of the girls has a migraine for over a month.  She was admitted to the hospital after it had lasted 15 days.  They kept her in UVa hospital for a week and never managed to get a handle on it.  They discharged her with no changes in  meds and no recommendations as to how to break the migraine.  I finally broke it with peppermint, dark chocolate, and espresso.  Weird but it worked.  So glad that you have good news all around–no surgery for your doggie daughter.  Hurray!

I know from personal experience just how horrible some medications can be (for some people). The side effects can be as bad as the initial problem. Of course, you can't know they are side effects until you are off of them, because the side effects can mimic all kinds of syndromes/illnesses. At least, that happened to me, and I was stuck with a doctor that didn't listen to the problems I was having.

I had to get off my medication gradually, or risk relapse. I really wish I had known sooner that most medications come in a liquid form. This allowed me titrate off of the meds as gradually as I needed to. Sure, it tasted nasty, but it was worth it.

Best of luck. You guys have earned it (and then some (which understates things)).