This weeks article: The Sibling Factor


I know that letting your little boy play with dolls or a doll house can be sorta tabu in some circles.  Truthfully, when I first became a father and this issue arose, I was sorta closed minded about it.

However, having grown in experience and realizing that there’s nothing wrong with my son playing with dolls, I have actually found that it can be a really positive thing.

While at Dr.  Patti’s office,  Emmett wanted to play with the dolls and giant doll house.

I was more than happy to play with him.

Maybe some of you out there are like,  OMG why would you let your son play with girls toys, you’re just going to confuse him.

I think that’s a very outdated way of thinking.

Emmett’s not confused about whether he’s a boy or a girl.  He simply wants to interact with the dolls and pretend.  Personally, I think that’s a great thing.

Not only can we use this time to practice social situations but he also demonstrated compassion as he took care of the babies.

Who doesn’t want their child to learn and show compassion?

We even practiced some social roles as well.  I also showed him that mommies and daddies can both make dinner or do laundry.  I wanted him to learn that at least in our family, that their are boy jobs or girl jobs.

By playing dolls and make believe with my son, I was able to help him better understand genders and things like that.  I wanted him to look past the stereotypical gender roles and be open minded.

Honestly, I had fun doing this with him.

Is it my favorite thing to do? Absolutely not? However, if he’s interested, than I’m going to support that and try to use it as an opportunity to teach.

I say,  if your son wants to play dolls or make believe who cares.  Let him be a kid. Take advantage of the time and help instill things in him that he can take with him the rest of his life.
On the same note, if your daughter was to play with trucks, so what. Trucks are cool whether your a boy or a girl.  Have fun racing trucks with your daughter.

This is just something that I personally believe is important.  Obviously, you’re free to do whatever you feel is best for your child.  I’m just sharing me personal experience.  🙂 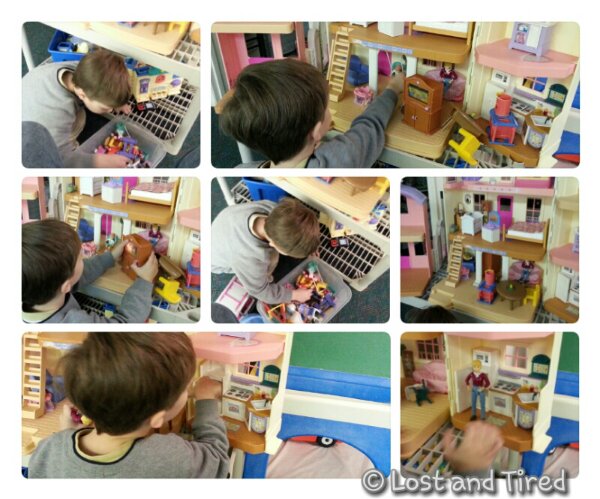 i think playing with dolls and doll houses are an excellent way to learn about living in general. Role playing, etc It also is good for the imagination. I encourage it:)

@KarimanElgoharyShama I happen to agree with everything you just said. 🙂

Indeed. Good for you and Emmet. Plus, it sounds like he has an awesome Daddy who is very nurturing, caring, etc. and sets a great example for being a good parent, regardless of any "traditional" gender roles. And if he likes dolls and families, make-believe situations are great for understanding social situations, as you said. 🙂

Our youngest has two baby dolls and a stroller for them.  He loves babies!  He also loves cars, dinosaurs, and getting dirty.  Kids just want to play.  I feel bad for those who are ridiculed for enjoying something that isn't the "social norm".  Good for you for letting Emmett just…play.  <3

@AshleyJensen let them be little. Words to live by. 🙂