As you know, Lizze and I returned to the Cleveland Clinic yesterday for an appointment with the sleep specialist. Lizze has been having significant issues with sleep over the years and we were not happy with the care she has received on the local level. 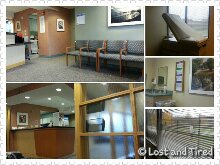 Her new doctor is awesome.

She met with us for almost and hour and a half.  Lizze was asked more questions than she has ever been asked before and a very,  very detailed history was taken.

At this point, she doesn’t know for sure what’s going on but Lizze is definitely suffering from chronic sleep deprivation.

The doctor thinks that there are many factors contributing to this, among the worst of them is most likely stress.

In the coming weeks, Lizze will be having another sleep study done by the Cleveland Clinic.

One of the other issues of concern is sleeping apnea.  The doctor is concerned that Lizze’s airway is too narrow.  This allows for her airway to be easily occluded. That’s could also be a very large component.

She also had bloodwork done to test her ferritin levels, as this could be contributing to her restless legs.

We’ve only just begun this journey to help Lizze finally find some restful sleep.  The doctor said we have a long road ahead of us. While that is discouraging, at least we are finally in the right place, with the right doctors and ever so slowly moving forward.

life is full of surprises

I agree with you on this one. Snoring is such a hassle. In fact tried other remedies as well just to have my partner stop snoring. But the one that is more effective so far is a mouth guard! It is indeed a lifesaver or may I say a sleepsaver! We’ve tried http://sleepsilproducciones.com/how-does-zquiet-work and it works perfectly well for us too.

A friend of mine has restless legs syndrome and she swears by a sachet of lavender soap at her feet. Someone told her about it and she tried it and said it does work although she doesn't have a clue why or how.

@MariaHall been there done that. Lizze tried that awhile ago and it didn't help. People swear by it. Perhaps mind over matter? Hey, whateve works right ?

I'm so glad you have a plan to go forward with. My husband has sleep apnea and it was only diagnosed in his early 30s after years and doctors not listening. The CPAP machine has made a huge difference, no more snoring from him, means I can sleep as well. Both of us are better rested, he is less forgetful, managed to hold onto a job for longer than a year… previous to that he would make mistakes due to sleep deprivation and get fired. He is a much happier, less depressed, less stressed, less angry person now.

@Marita that is awesome. Thank you for sharing. 🙂

Good to hear that there's a plan in the very least. Any step forward is a good step made.

We just had our 1st visit with a sleep doctor. Siena is only sleeping 4 hours a night and her behaviors are getting worse. Glad to hear Lizzie is in good hands! 🙂

Wow, Rob!  Sounds like a great doctor–sure glad you two connected with her.  I sure hope she has a workable plan for Lizzie.
K~