Whatever can go wrong, will go wrong

A night without any kids

Whatever can go wrong, will go wrong


There is a chance that Gavin will be home all next week.  This may not come to pass but until we know otherwise, I feel like we should be prepared. 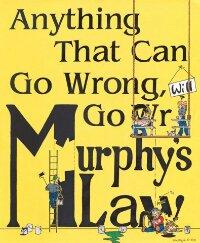 For example, both boys are afraid to use the bathroom by themselves.  Emmett completely strip off all his clothes to go potty and then can’t get himself dressed again.

These are both things we moved beyond,as the year.

The past few months, we have seen a growing trend of returning behaviors, we once thought to be overcome. It’s easy to say, don’t worry about it, kids are resilient. That’s a true statement, however, when you have experienced things over and over again, that statistically shouldn’t be happening, it’s a great deal tougher to feel at peace or not to worry.

Gavin is beyond rare. The unique combination of health and mental health issues are so uncommon, we literally can find anyone that can give us any answers.

It may seem that I’m overreacting to Emmett’s trend towards regression lately. I can understand why someone might think that.  However, Gavin was Emmett’s age when he began to regress and look at what happened to him.

Once something that almost never happens to anyone, happens to you, it changes you to such a degree that you become hypervigilant.  There’s really no way around that when your family becomes a statistical anomaly.

We have a very good friend that used to work in the social services and work with the volunteer guardian program. It was their job to advocate for children and ensure their best interests. I remember talking to her one night about something that had happened during a court hearing, regarding Gavin’s custody.

She said to me that it used to be tough to believe all the things we said were going on.  It used to appear that we were overreacting.  However, after gaining some insight into our lives, especially the court stuff, she told me this. She said that when it comes to our lives,  anything that can happen, will happen.  She asked how we could not overreact when all the things that everyone told us would never happen, did?

I could go down a list of all the things that should never have happened but did anyway. A lot of people wouldn’t believe it but that doesn’t matter.

Wow… Getting back to the point.

The point I was trying to make, before I completely derailed this post was that I’m really worried about the boys.

I suppose I could have just said that in the first place.

It’s really difficult for either Lizze or myself not to worry about the boys revisiting some of these past behaviors once again.

Can any of you relate to this?

My son’s development has been a frustrating journey of two steps forward, one step back. I still see him “backsliding” at times, and it’s very hard to take. It happens less than it used to, but other issues have taken its place. The important thing I try to remember is that he still keeps making progress, and he continues surprising us with the person he’s becoming.

Rob, your life in many ways is like a war, and you’re on the front lines, alone. You need a lot of rest and healing, which you probably won’t get any time soon. As a chronic worrier who still suffers from PTSD (from childhood trauma) I want to share this little trick which has helped me immensely.

“Don’t believe everything you think.”

I know it’s your job to guard the gates and watch for storms on the horizon. You do an amazing job juggling all the things that need your attention. It certainly does seem that every terrible thing that could happen to a child has happened to Gavin, and your whole family as a whole. But anticipating things that haven’t happened yet will only make your burden heavier. Emmett is not Gavin. Elliott is not Gavin. If the worst happens, then deal with it when it happens,but don’t let fear prey on you.

Exhaustion and stress destroys your ability to think rationally — to navigate life safely.  Please, stop whenever you can sit for a moment, and take 10 slow deep breaths. It will push oxygen into your brain and help you calm down. If you have the time, do it twice. As you breath out imagine your body releasing the stress inside you. Imagine your muscles relaxing.

Thoughts are very powerful things. Visualize your children healthy and whole. Imagine yourself rested and strong. Imagine Lizze laughing and smiling, and pain free. Teach your children to use these techniques to ease their stress.

As a parent, I’ve witnessed the non-stop screaming, the head-banging, the extreme oppositional behavior. I’ve been through years of bed-wetting, terrible anxiety — to the point of vomiting on the way to school each morning, and the often conflicting medical or expert opinions on his diagnoses and prognosis, and what we could/should do to help him.

When he was three I was advised to institutionalize him by a team of “experts.” I was told he was severely emotionally disturbed and would never be able to function in the real world. I rejected their opinions and chose to believe in my son. (I screamed and cried and told the experts to f-off. Afterward I’m sure they thought I was the one who was disturbed.)

You are a great, great parent. You are with your boys 24/7 and they are literally swaddled  with love and attention. Every breath you take is for them and Lizze. How many children have that? How many families have that?  It’s the best therapy in the world!!!!

I want to encourage you in every way I can. Now breathe.  🙂

You and Lizze may be worried but kids smell worry faster than a dog sniffs out fear. You both will have to put on your smiling, confident faces for those little boys and keep saying that it will be alright, that together we will all manage and who knows, Gavin might be feeling a little more relaxed and things may go smoother than anticipated. My mom used to say fake it till you make it…

ohh yes I can relate.  It’s like being the punch line of a joke no one gets.

@wyrdpookaone well said a day great way to describe it.