For those of you that have been following the Lost and Tired family’s story for awhile now, you’re probably familiar with the concern over Emmett’s regression lately.

It hasn’t been anything extreme but enough that we are very aware that it’s happening. You may also recall that Gavin was about the same age when he began his steady decline into regression. Needless to say, Emmett experiencing this as well has us truly terrified.

We have been seeing many behaviors resurfacing after he had moved past them. One of the most noticeable is potty time. Emmett will no longer goto the bathroom alone. This is a step backwards for us. Also, he’s back to taking all his clothes off, including his socks, before going to the bathroom. At least he’s still potty trained. Thank God for that.

I’ve also heard that the taking off of his clothes could be a sensory thing. Like he somehow thinks they will get dirty if he wears them. The problem is that he won’t get dressed again after. He’ll put his underpants back on but nothing else.

I know that he has a great deal of things going on in his life. While it’s not always convenient to escort him to the bathroom, I’m happy to do it if it makes him feel better. I have been trying to instill the need for privacy in him. I’ll try, whenever possible to stand outside of the open bathroom door.

That way he knows I’m there but he’s sorta on his own at the same time. It’s always a moving target with my kids. I was wondering if any of you experience this type of one step forward two steps back kinda thing? How do deal with it? 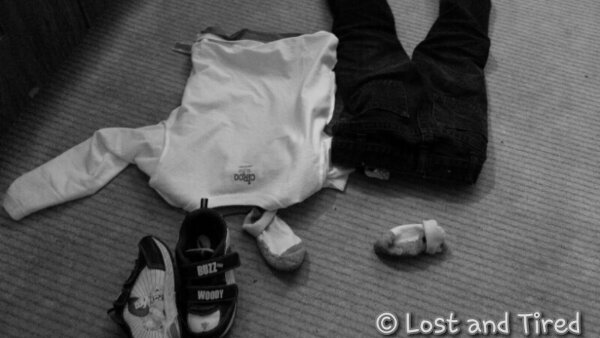 Con’t of previous post…..
Byron is doing OK in school,but it is the after school program that he is having problems with. He recently got suspended from it for 6 days because he got upset about the snack. It was yogurt and cheese. He refuses any yogurt, jell-o, pudding type foods saying they are too wiggly. He basically eats 4 things. He got upset over the snack and threw a royal fit when the staff would not give him anything else. Then the power went out and the group had to move to a better lighted area. He was already upset over the snack and the power issue made it worse. So, the suspended him saying that he was showing a pattern of bad behaviors. WTH?! So, the hubby called the director and was given the same line of crap. Byron does not understand why he got in trouble. He also gets bullied, but the staff only catched him when he retaliates physically. He and his counselor have discussed it and she has tried to talk to him about how to deal with them and tell an adult. Hopefully she can help him at his next appointment and we can get the sensory issues delt with

We’ve been having issues with my oldest. He has ADHD and is on medication for it. We have him in counseling. He goes on 12/17 for a sensory processing evaluation. He wears glasses (his vision in 20/200 w/o glasses) and is the size of the typical 6 year old and he is 10. He has asthma and allergies. He is in the AG program at school and is extremely bright. He has few friends and I know this bothers him even though he rarely talks about it. He hyper focuses one on thing and currently it is Lego/building. He says he is compelled to build. He has serious issues with foods and clothing. He constantly picks at his skin. Any bug bite drives him batty and he looks like he has chicken pox most of the warmer months due to the mesquitos and constant picking. He prefers long pants/shirts all the time. . I have started to wonder if he is on the autisctic spectrum. He has most of the traits except the hand flapping/repetative movements.