How many of us would have the courage? -

Spinning our wheels on the road to nowhere

I feel lucky to be alive

How many of us would have the courage?

Today was one of those days that Gavin needed to come home after school for a few hours.  I figured I would just take him with me to the grocery store.

This would not only limit his time in the house, but also provide me with a chance to work on those real life skills he’ll need if he’s ever to live independently.

When I got to the school and Gavin came out, I was a bit caught off guard to see him dresses in an Iron Man costume.

Apparently, it was a special day at school and the kids were allowed to dress up as a superhero. 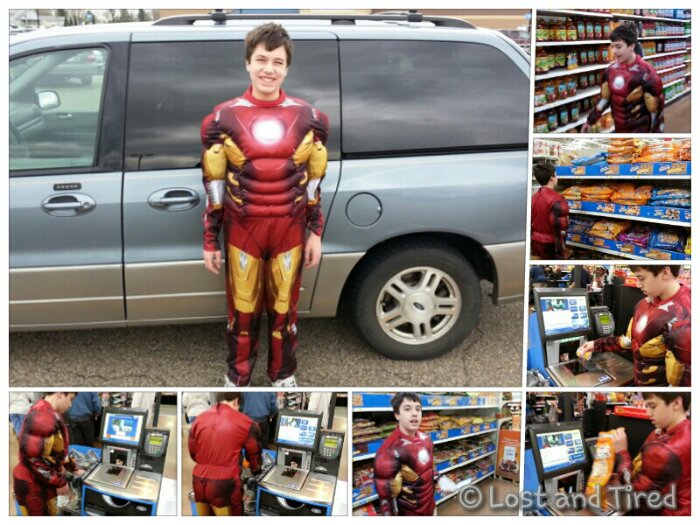 Gavin was really proud of his costume and so I didn’t have the heart to make him take it off before going into the grocery store.  Maybe I should have, I don’t know.  I just didn’t see the harm.  If he was happy, I was okay with it.

After telling Gavin that we were going to the store, I gave him every opportunity to remove the costume prior to going into the store.

I told him that it’s totally up to him and he wants to wear it in the store, that was okay with me.

Secretly, I was really, really hoping he would take it off but he decided that he would wear it.

For the record, my concern for him wearing the costume was more about how people were going to react and what they would say.  When  it comes to my kids, I have a very very low threshold for people coming down on them for being who they are.

We did our grocery shopping.  A small budget means it didn’t take too long, which was a blessing at this point.
I was wearing my Lost and Tired shirt and so some people understood better than others.  The looks both Gavin and I got were absolutely ridiculous.  I mean, we were in Walmart of all places. The whole “people in glass houses shouldn’t throw stones”  thing comes to mind.

Some people smiled, while others laughed and pointed.

I felt so bad for Gavin because people were just not very understanding.

There were a few moments where he seemed to be hiding behind me so people couldn’t see him. Other times he just walked with pride.

As well we’re walking out of the store, some idiot made fun of him, in a very loud, very obvious way.  Thankfully, Gavin didn’t realize he was being made fun of.

I’ll be completely honest.  It’s been a long time since I’ve had the desire to knock someone on their ass, and if I had any less self-control, I would have.  However, doing so would have only brought attention to what this guy had said and I would have had to explain that to Gavin.

Then of course there’s the whole lead by example thing that I’m so fond of.

All I can say at this point to anyone of those people that sat in judgement of Gavin is,  how many of you would have had the courage to dress up as Iron Man and walk through Walmart?

. I have had people insult both me and my autistic son because of his quirks. I always teach him to stand tall, be proud of yourself, and don’t let others bully you. You did the right thing by supporting Gavin’s choice. If my son had wanted to dress like Iron Man I would have let him too. Hell, I would have loved to wear an iron man costume right along with him. I am so sorry people are so cruel and ignorant. You have great self control for not knocking them flat on the ground. I would have wanted to myself.

Not entirely sure I would have had your tolerance with those who mock, but that is just me.

CarlBainbridge trust me, it wasn’t easy. I just figured that if I said anything to them, I would have to explain to Gavin why I was upset. Sometimes blissful ignorance is everything.

For what its worth, I am glad that a true hero walked through Walmart keeping me safe. Shame on those who dare mock a child for doing something they wished they had the courage to do.

I don’t think anyone would think twice about it at my grocery store.  Maybe amusement at the ways of the world, but nothing more negative.  Why would Walmart shoppers feel free to express themselves so rudely?

dotdash I don’t know. It was Walmart of all places. Seeing a kid dressed as Iron Man is not the oddest thing I’ve seen at Walmart, not by a long shot. 🙂

I believe both comments. But you also have to pick your battles. I think having the courage to walk with him and not be ashamed shows your love for him as his father. There will always be people who make fun of others and they will get what is coming to them someday. If necessary that could have been turned into a teaching moment as well. It can also be much easier to swallow if a 4 yr old is dressed like that then a 12 yr old. I have always said that being on the spectrum is a blessing and a curse.

JenniferWhynott your absolutely right. In Gavin’s case, he’s a 4 year old trapped in a 13 hear old a body. Well said..

Out of curiosity, if you’re looking to teach him life skills, wouldn’t this have been a great time to show him the importance of dressing appropriately in public?
I don’t personally have a problem with kids dressing up and wearing costumes, but this could have been a great lesson for him as to why we need to wear occasion specific clothing.

Gurdy This is the first time in his entire life that he wanted to do this. It wasn’t like we planned on this. He had the costume on from school. Also theirs something to be learned by not caring what other people think.
It was an interesting day. 🙂

I live in southern California. Anything goes here. Actually, I wouldn’t think twice about it. Who’s to say he isn’t in a play, or another costume function? I think any moment that Gavin is happy being a kid is a +1 for him. Look at that big smile on his face!  Don’t waste your time worrying about what other people think. There is absolutely no value in it.