Please keep my wife in your thoughts and prayers

I’m so proud of my kids

Can you spot the victory here?

Please keep my wife in your thoughts and prayers


I wanted to take a few minutes and let you all know what’s going on with Lizze.  To put things simply, she’s not doing good at all and I’m really, really worried.

Not only is she dealing with a excruciating migraine that has been with her for the last 1.5 years +, she’s got fibromyalgia, hypersonic, two bad knees, PTSD and severe depression coupled with extreme anxiety.

This whole menopause thing is completely new to me and I’m completely overwhelmed by, which is really sad because she’s the one going through it.

They say that some women go through menopause with relative ease and others, not so much.  Well, Lizze apparently falls into the others category.

Everything she’s already been going through has been made much, much worse.  Her migraine has gotten worse over the past several months.  The fibromyalgia related, total body pain is worse as well.  For those of you out there dealing with fibromyalgia, my heart goes out to you and I know you’ll understand this.

Every minute of everyday is now a constant fibro flare.

It’s like as soon as the hormones got shut off, all hell broke loose. I suppose that makes sense and it’s also the reason we have switched her care to the Cleveland Clinic.

While it’s not unheard of for a woman to go through menopause this early, it’s not very common, at all. Her doctors are saying that she’s hit menopause about 20-25 years early. 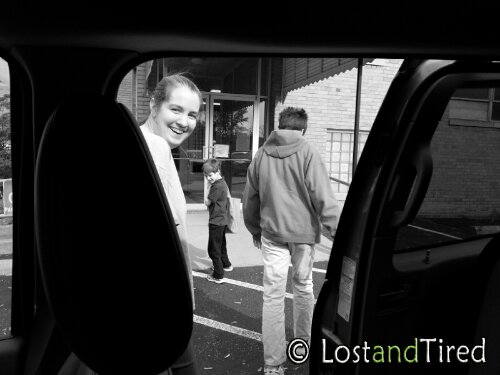 I love this picture of her. It’s happened to be one of the few good days she’s had recently. I hope to see many more of them in the future.

For those of you unfamiliar with menopause, at least from an ignorant male perspective, it’s not always a pleasant experience.  Right now, literally everything she had going on before is made worse by the hormone instability.  From what I’ve read, things like depression, anxiety, headaches/migraines and a whole list of other things are often worsened as a result of hormone changes that are occurring.

Lizze is no exception.

She’s been through so much in her life and this is hands down, the worst I’ve ever seen her.

I’m scared, heartbroken and helpless to do anything.

Lizze is my best friend. My soul mate.  She’s the mother of my children and it absolutely kills me to see her like this.

I’m taking her to see Dr. Patti (her psychologist) in the morning and her PCP in the afternoon.  We need to pull out all the stops and find a way to provide her with at least some relief.

I have to make a ton of phone calls to get the ball rolling on some of these upcoming appointments in Cleveland that seem to be in limbo at the moment.

I also have to call her local neurologist that manages the fibromyalgia and migraines (I know that may sound weird to those of you in the know but there is a reason) because he’s not doing the prior authorization for her medication refills and so she’s been out of meds for over a week.

I’m really fired up about that because it’s something she’s going through that could have been prevented if whoever is supposed to fax the paperwork, was doing their friggin job.

Please, keep Lizze in your thoughts and prayers as she embarks on this new and difficult journey.

She means the world to us and I would be forever grateful for anything you can send our way…..

If I have time tomorrow, I’ll explain what is being done to help her and how it’s working so far.

My thoughts are with you and your wife!

MultiTestingMom thank you so much. 🙂

Thoughts and prayers coming your way….

Thinking of you all and sending some prayers and strength your way.

Rob, I think of your wife and your family often! Have you ever thought of trying Shakeology? I’ve seen a quite a few people mention that it can be very helpful for Fibro. I’ve wanted to try it for my family for some time, but I think it can be a little spendy. It might be something worth researching though. I hope things go well tomorrow and Lizzy is able to get the help she needs.

moondustwriter perplexingminds @First Lee thank you all very very much.

I hope everything works out for Lizze. It sounds like she has a very good support system. I too suffer from Fibromyalgia, except when I went in hospital this past week over pain and spasms they did bother with it sent a psychiatrist and tried offering more medication (as if the 8 I’m on to manage this isn’t enough). I am so happy that her health care specialists at least care 🙂

Rob will pray for your dear wife.
Hang in their it’s an uphill battle.
I’m sure some people have told you that nutrition can be a huge key to health including fibromyalgia few people know the key elements. Ck out Hallelujah acres – I have seen folks with cancer cured (no joke)

If it helps at all, think of menopause as backwards puberty.