Welcome to my latest #parenting fail

Welcome to my latest #parenting fail


Because of Gavin’s autonomic dysfunction, his doctors have him on a very, very strict fluid intact schedule.  Gavin’s only allowed 2.5 liters of water (only) per day.

We carefully monitor this because any more than 2.5 liters of water can cause an autonomic crisis any less and it’s the same problem.

Last night I just realized that Gavin’s been drinking an extra 750 ml of water per day.

Gavin has a water bottle that we’ve marked, so he knows where to fill it to.  He recently switched into a different water bottle and I erroneously assumed that it had been measured out.

Last night I decided to double check because it didn’t look right.  Turns out that he’s been adding an extra 250 ml, every time he filed it up.

He fills that water bottle up 5 times a day and so that actually means he’s been drinking about an extra 750 ml of water per day.  Thankfully, there hasn’t been any ill effect but I’m really glad I caught that.

I feel like an idiot right now because I should have double checked this much sooner.

At least we know now and he’s doing fine.  This could have proved a very serious problem. I’ll just add this to the list of parenting fails I’ve been accumulating over the years. 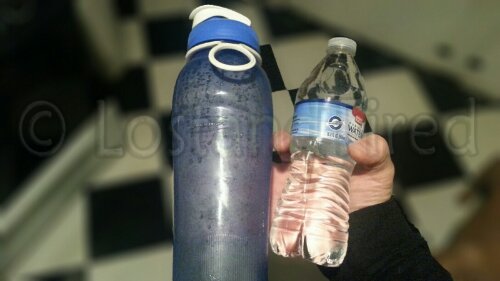 You’re being a little tough on yourself, Rob. Glad you caught it, but don’t get too down on it.

any of us could have easily done that ourselves. This dysautonomia stuff is really complicated and tough to deal with. Perhaps that’s why he’s been sleeping a bit more lately? Hopefully his energy levels will go back to normal.

Easy mistake to make, don’t beat yourself up over it. Mistakes happen, we’re human.

Silachan thanks.  I appreciate it.  🙂