Reactive Attachment Disorder: When one parents in denial

Reactive Attachment Disorder: When one parents in denial

Whenever I think I’ve finally got him figured out, he proves me wrong.

Tonight we were having a rough time getting Emmett and Elliott to go to sleep. Elliott is anxious and afraid but won’t tell us what’s bothering him, outside of the nightmares he keeps talking about. 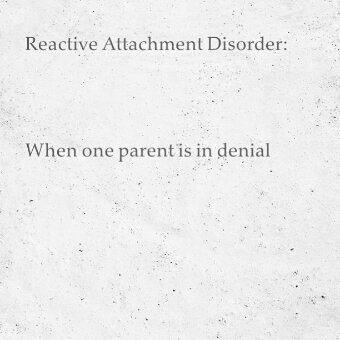 Emmett was just in a bad mood and didn’t want to go to bed so he was being difficult.

Gavin goes to bed like a dream.  We give him his meds and he brushes his teeth, goes potty and is then off to bed. Tonight, he decides to be difficult as well.

He went to bed like normal but then just as Emmett closes his eyes and Elliott finally calms down is is almost asleep, Gavin comes out of his bedroom and asks to use the bathroom, again.

I say again because he just used it about 10 minutes ago.

With Gavin, you can never assume anything.  So the moment I assume that he just needs to go potty, it’ll turn out that he was doing this to make it more difficult for Lizze and I to get the boys to sleep. If I assume that he’s just messing with us, and tell him to stay in bed, he’ll have an accident.

You will quite literally drive yourself crazy trying to figure this stuff out.

I used to think that his accidents were legitimate accidents but it turns out that it is something that is very common in kids with Reactive Attachment Disorder and even Bipolar kids as well. These accidents are willful acts meant to disrupt and create chaos.

He even did this to Dr. Pattie, during an several appointments.

Believe it or not, I actually forgot about that until Dr. Pattie reminded me recently, during our discussion about Gavin’s recent accidents.

The truly messed up part of this whole thing is that no matter what we do or how we address this, we have no idea if we’re actually making the right choice. If we assume this is outside of his control and we’re wrong, he wins. If we assume that he’s doing this on purpose and he’s not…..well that’s just messed up on our part.

I hate the idea of punishing him for something that is truly outside of his control.

We don’t punish him if he has an accident because of everything I just stated above.  However, when it comes to what happened tonight and him wanting to go potty again and in order to ask us, he has to wake up his brothers that we tried so desperately to get to sleep…….it’s another story.

If I asked his doctors about this, they’d give me that look like, come on Rob, you know exactly what he was doing.

Something that’s important to know about me is that between Lizze, myself and all his doctors, I’m the one prone to giving him the benefit of the doubt. The truth is that no matter how many times I’m proven wrong, I always remember that one year old little boy that I took on as my own.  I remember everything that his biological father and paternal grandparents put him through.

I remember how he was before everything changed and part of me has never dealt with that loss.  To be completely honest, a very large part of me is in denial about who and what he has turned into.

This has been a source of contention between Lizze and I on many occasions because when he targets her, he does so very deliberately. He also does this at times when I’m not there to see it.  This is called splitting and is meant to create chaos and tension between Lizze and I.  Sadly, he’s very, very good at this.

Lizze and I have since gotten mostly on the same page.  Our medical and psychological support teams have helped us to see exactly what’s going on and address the problem at its source.

I wouldn’t wish this life on anyone.  Anyone that has this life, understands exactly what I’m talking about.It’s so hard to wrap your brain around this kind of stuff because you have to first accept and acknowledge that a rather unassuming like boy is capable of these things.

All I can say is that you would not believe the things that my son is capable of doing and I’m talking about things that have been witnessed by multiple people and well documented.  The things we don’t know about yet, are the ones that scare me the most.

This is why we have to take every precaution and more often than not, assume the worst.

I wanted you to know I know how you feel, my oldest has ASD, Bipolar, ADHD, and Attachment Issues. I have been through hell and back I am sure as you know. I think that the attachment issues (which Therapist said was RAD and the Autism lady said it was part of the ASD but I think its more) are extremely hard to handle and without that bond the relationships is almost like a stranger (they dont care). I am a single mother of 3 (another son with ASD) but my mom has helped me raise my oldest since I was only 19 when I had him. Zay liked to split us all the time and it took several years to get us on the same page (I was the harder one and she was the push over). I am wondering how you handle punishments, Zay’s med provider has us in a holding (no punishment and no expectations) which we have been in for over a year, to me that is dumb, I cant punish him for hitting me or his siblings.

Tammymcgann I’m going to just reply to these all here.  Someone that “gets it”.  I don’t really know what to say.  It’ll sound bad but I was happy to read your comments.  It’s such a rarity to find another person  that understands.
Most of my readers are very supportive but don’t have first hand knowledge of this type of situation.
It’s such a horrible feeling to be a parent of a child that you can say these things about.  Not because we don’t love our kids but because we do. We could pretend all day long that these things aren’t happening but that wouldn’t help anyone but the people who are made uncomfortable by the reality of our lives.
I LOVE your analogy of the battlefield strategy.  What a brilliant way to think about this.  You are absolutely right when you say that you have to play the game because that exactly what it feels like.
While I’ve never thought about in that sense before, that’s exactly what we have to do, every single day. People wonder why we’re so tired all the time. It’s because it’s freaking exhausting. It’s psychological warfare and being on the opposing side of your child feels awful.  However, in order to survive, you have to play the game and be better at it then your child.
What people don’t realize is that we have to win every time or someone pays a price.  Our child only has to win once in order to succeed in their mission, whatever that mission  is.
You are amazing and should check out a blog called whynotfathers.com, it’s by my friend @CarlYoung and he’s raising a son with many similarities to my son Gavin.  Both are RAD kids and while the underlying reason behind the “why’s” might be different than your son, he understands that game and is a fantastic person to connect with.
Thank you so much for sharing.  I’m glad we connected.  🙂

The only thing that “solved” the problem was to anticipate what he would do.  It was like battlefield strategy.  Treat them like “the enemy” and beat them at their own game.  I know that sounds evil, but I also know that you get it!  Is their some tactical maneuver that you can create to beat Gavin at his game?

Sometimes, while I was “ignoring” him while cleaning up his poop, he would poop in another room and smear it all over the place in there as well! If I punished him by putting him in his crib, he would just take off his diaper and poop all over his bedding and smear poop on every single crib rail. And pee on his blankets. IT WAS A NIGHTMARE. He doesn’t do it so much anymore because I’m onto his game, but there was a solid year where he caused me to break down in tears on almost a daily basis. The house was always stocked with a massive quantity of Clorox wipes. (And still is) I would, and continue to, buy them in bulk. I don’t care if a child has an IQ of 10; they can still be intelligent enough to be manipulative. My son is, your son is. It’s frustrating and exhausting. 🙁

To a veeeeeery small degree, I can relate.  Jack uses poop as a weapon.  And when I say that to people, they look at me like I’m exaggerating.  After all, he’s a 4 year-old kid with Down syndrome and autism, mentally about 18 months old!  (He’s now nearly 7 years-old, but the problem was at its worst when he was around 4)  What kind of monster am I to assume that my poor little “intellectually disabled” baby would INTENTIONALLY do such a thing?!  But it’s true!!!  I’d leave the room he was in to spend a little bit of time on the computer (in a room with the door wide open, where he could enter at will) and he would get mad at me for “ignoring” him.  So he would intentionally remove his diaper, poop on the floor, then walk through it, climb all over the couch, smear it in his fingers and paint the TV and DVD player with it.  He knew EXACTLY what he was doing.  It would take me HOURS to clean up the mess that he would create in the span of 10 minutes.