We had a mini-crisis

We had a mini-crisis


We had a little mini-crisis this afternoon. This mini-crisis was a result of Gavin’s actions this morning and the day long subsequent fallout. While Gavin couldn’t have foreseen some of this, he did put the domino’s in place and then knocked the first one over.

This resulted in Elliott and Emmett being at each others throats for most of the day.

They were fighting over a stuffed animal that Elliott had asked Gavin for this morning. Instead of Gavin giving it to Elliott, he turned around and handed it over to Emmett (who had no interest in it until Gavin gave it to him). 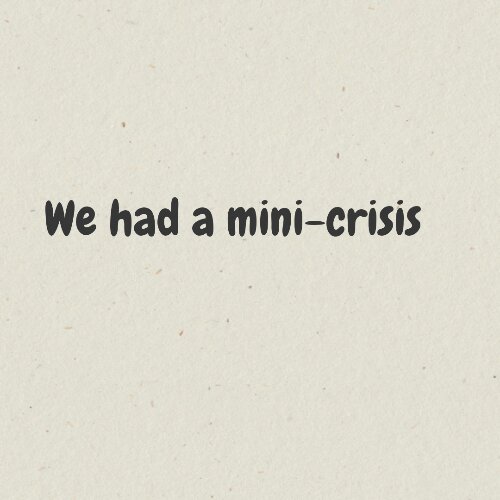 Gavin has admitted to doing this on purpose but doesn’t know why he did this.

The reality is that Gavin simply thrives on chaos. He puts the pieces in play and sits back and watches the chaos ensue. Welcome to the wonderful world of Reactive Attachment Disorder.

While the boys are responsible for their own actions, decisions and choices, Gavin is very good at influencing their behavior and orchestrating this type of fallout.

The last time he was a guest of the psych-unit, they took notice of this type of manipulative behavior as he tried to pit staff against staff. This is called splitting and is what kids with Reactive Attachment Disorder are known for excelling at.

Anyway, I mentioned that we had a mini-crisis this afternoon.

Elliott and Emmett were fighting over that stuffed animal from this morning. Elliott was so stressed out and upset that he went upstairs to cool off.  After a few minutes he began screaming for us because his nose was bleeding.

As I ran up the steps, I saw drops of blood, forming a trail that lead to the bathroom where Elliott was standing over the toilet.

I had assumed that this wasn’t a big deal, so I wasn’t prepared for what I was walking into. There was blood everywhere, literally everywhere. Blood was all over the carpet, all over the sink and counter as well. The toilet was literally covered in blood. It looked like a crime scene.

Elliott was hysterical and this had obviously been going on since he went upstairs. We couldn’t hear him screaming for help because Emmett was busy screaming his little head off on the first floor.

I quickly got his nose bleed under control and Lizze and I cleaned up the mess.

His nose began bleeding while he was walking up the stairs. He didn’t actually hurt himself, he was just so upset that it just started bleeding.

Needless to say that Elliott was traumatized by all the blood he saw everywhere. He spent the rest of the day apologizing for the mess.

Lizze and I feel awful because we didn’t hear him right away. I’ll be honest I’ve been on traumas as a medic that had less blood than what I saw in the bathroom today.

Thankfully, it stopped as soon as I applied pressure. Elliott’s fine now and for that I’m incredibly grateful.

I’m upset because this whole thing was unnecessary. This entire day was a disaster as a direct result of Gavin’s actions this morning. He put the domino’s in place and tipped the first one over, watching as the chain of events unfolded.

This is an example of what families with RAD kids might be dealing with. It’s ugly, scary, frustrating, heartbreaking, dark and it’s the reality that we are forced to live in. I know that it’s hard to understand and even harder to accept but this is just one example of the challenges facing families like mine.

Did Gavin give a Elliott bloody nose? Not directly. With that said, there is culpability here. He wanted to create chaos and he did. That resulting chaos led to everyone having a bad day and Elliott having a really negative experience with an explosive nose bleed.

There simply has to be accountability.

Gavin spent the day in his room. The agreed upon approach to these situations is temporary removal from the family. This is what our doctors and specialists have told us we need to do.

Temporary removal from the family, in this case means that Gavin spends the day in his room. He eats in another room and not with the rest of the family.

I can already hear some of your heads exploding over this. All I can say is walk a mile in my shoes. When you have a child in your home with RAD and that child targets your other kids or your spouse, you tell me how you would handle it nonviolently.

There is a method to the madness here.

The goal of isolating him is to teach him that if he wants to be a part of the family and participate in family activities, he must behave in a way that is conducive to such things.

Gavin doesn’t learn from his mistakes and we have to take more dramatic approaches that require outside the box thinking and sometimes a strong stomach.

This is not a simple problem and as a result, a simple solution will not work.

Before Gavin went to bed this evening, he made sure to tell me that tomorrow is a clean slate. That sorta makes me nervous for what tomorrow has in store for us.

What a tough day for everyone 🙁

Dwayne Murphy don’t even give it a second thought my friend.  Our story is a complex one.  As to your other comment, you’re right.  If there is a silver lining here, it’s that he’s spending more time in reality.  Good call on that one.  I hadn’t really thought of it that way but you’re right.  Thanks 🙂

Also, I’ve taken the time to read over your blogs and I apologize over how much of a bastard I was being over the whole Lego thing several weeks ago. I understand now why you need to do the things that you do with Gavin.

On the positive side, if there is one, it seems that Gavin is spending less time with his “visibly challenged friends” since he is interacting with Elliott and Emmett. Elliott and Emmett had been getting upset over how Gavin had been ignoring them. How has he been doing in that area lately? You haven’t mentioned it in a while.