Please pray for Gavin. Rushing to the Emergency Room

Okay…  The doctor has been in and I think we have sufficiently confused him with all of Gavin’s health issues. Gavin’s renting and watching TV while they figure out what to do.

This is what happened.

My Mom called about 11am this morning and told me that Gavin was having vision  problems. She also said the his right eye was droopy as well.

She was able to learn from Gavin that this has been happening for awhile now. Thoughts were racing through my head. I was worried and frustrated because why the hell wouldn’t he tell anyone about this before?

Lizze and I rushed over and spoke with Gavin.

According to Gavin, he was walking into the light and his vision got really blurry.  All he could see was purple and green.  He was very dizzy and his right eye became droopy.

My first fear was stroke or TIA. However, after talking to him, it feels like an impending Autonomic Crisis.

We got him right to the ER at Akron Children’s Hospital and are now waiting to figure out what’s going on. When we walked him in to the hospital, we had to basically hold him up and keep him from tripping over his own feet and walking into walls.

Please keep him in your thoughts and prayers and I’ll try to keep everyone updated. 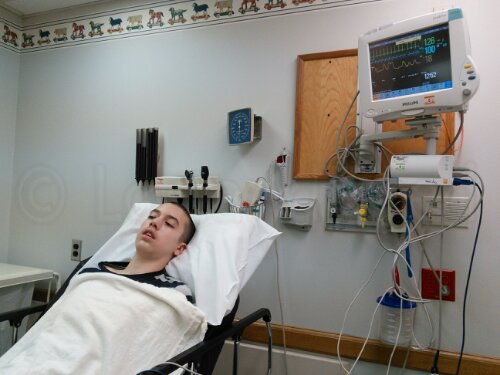 Good Luck. Is it possible he’s having seizures? My son would see auras, Halucinate, lose his balance

I’ll keep you all in my prayers. I hope Gavin recovers soon. Thanks for the updates, too.

My prayers are with you! Take care of Gavin and yourself!!!

Keeping you all in my thoughts

Praying for you all, Rob.

Thanks everyone. I appreciate the support

Poor guy.  He goes through so much.  I’ll be praying.

Rob, what medications is he on? When my son was about Gavin’s age, he had some funny episodes that I thought were seizures or TIA’s. They caused the eye to droop and colors were effected. Docs never fully figured it out, but I think it was medication-related, as the symptoms went away after some medication changes.

poor honey… I hope they get to the bottom of this soon and you’re all back home.

Hope it is nothing serious and he gets much better soon