Check out Emmett’s “Dinosaurs at bedtime”

A significant change in Gavin’s Meds


Tonight we had a really bizarre occurrence that ended with me overwhelmed and freaking out.  It started out with Gavin coming downstairs and asking if his vision getting blurry means he’s having a crisis?

It ended up turning into a really frustrating conversation with Gavin that had me at my wits end.
Basically, we learned that his vision has been getting blurry and he just didn’t think it was important enough to tell us about.  I’m freaking out about his health to begin with and this scares the crap out of me.

I mean he was just recently admitted to the hospital for this very same issue and he doesn’t think it’s important….

What’s even more frustrating is the fact that we can’t get any reliable details out of him because he’s not capable of providing them. 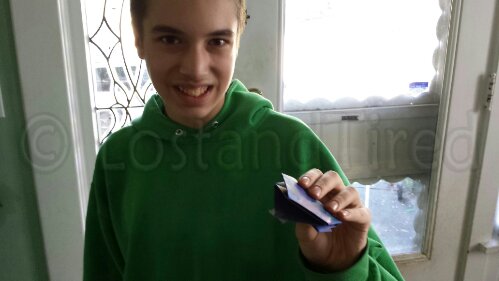 I wanted to know how often this happens and he says that he estimates this happens twice a month. He has no idea and it was very clear that he was trying to tell us what he thought we wanted to hear.
I asked him if his vision was blurry today and he said he can’t remember.

When I told him that this could be part of the autonomic stuff and it’s extremely important that he tells us when something like this happens, he kept saying over and over that, “I assure you this isn’t part of a crisis…”

Lizze and I ended the quest for information because it was pointless.

Afterwards, Elliott and Emmett came down and told us that before Gavin came down to ask me his question, he was freaking out.  They said that he just kept saying “it’s not part of a crisis”.

I’m so frustrated, overwhelmed, burned out, scared and feeling utterly hopeless. I simply can’t explain how worried I am about Gavin. :'(

AutismAdventure I totally understand. I truly, truly do.

It’s extremely frustrating when this happens. I go through this with my son too. He doesn’t understand the flow of time yet and will only tell me when he hurts so bad or feels so bad it’s hospital time. I hate that they can’t communicate these things properly to us.

Our son has many symptoms that should be tracked but he is only 8 and he really has a hard time knowing if it happens a lot or once a month or everyday.  It is kind of scary.  I’ll be watching for any good ideas from anyone.  I don’t want to cause my son more anxiety.
I am so sorry you have to go through that fear and anxiety.  One weekend was so bad, my husband and I didn’t really sleep for 2 days.

anansison always great to hear from you. I like your suggestion and it makes a great deal of sense.  Yes, it’s frustrating, mainly because it’s such a helpless feeling.
Thanks again for reaching out. All the best my friend. 🙂

It sounds like Gavin is worried and scared. Keeping Gavin and your family in my prayers.

One way to monitor this externally with him is to ask him to react a certain way whenever his vision blurs (or darkens, depending on what is really occurring with him).  For instance, you can tell him that when it happens he should close his eyes, put his hands over his eyes, and count to 10.  Afterwards he should remove his hands and open his eyes to see if his eyes are better.  Then he should be encouraged to tell you guys so you can put it on a chart or something.  Even if this does not help, it would give you a visual if this occurs in your presence and gives you at least 10 seconds to figure something out or prepare yourself.
To monitor for blurred or obscured vision just watch how he walks around objects that are low to the ground.  If he easily avoids them then he’s doing okay at the time, but if he’s bumping into things, stepping on them, etc. then the vision issues are occurring more often.  Does he have low blood pressure or low blood glucose?

Monday Morning Quarterback mode: In your post you mentioned being frustrated because you felt that he didn’t think the vision issue was a problem, but it appears that he did if his question was “if his vision getting blurry means he’s having a crisis?” He wanted some reassurance and was trying to avoid another hospital visit, which shows some anxiety about it (this was also confirmed later in your post; sounds like some anxiety about ti).
I do feel for your family because I have worked with children with cognitive/medical degeneration issues.  I have seen some of the difficulties you currently encounter and may meet in the future.  If you need any advice or resources let me know.

rjones22 that’s a very interesting perspective.  You’re right, sometimes it’s hard when you are so close to something. Thank you very much for sharing your thoughts. 🙂

Keep in mind, I don’t know anything and I feel for you. the only reason i wanted to say something on this is that you are so close to the situation and I saw a couple of good things that you may not have thought about. First, i am so glad he came downstairs to tell you even though he couldnt discuss it with you at least he recognized something wasnt right and knew to come tell you. Gavin stills has emotions which is good and I thought that when he is telling his brothers “it is not a crises”i think that is good because he may be calming his self down and also maybe showing empathy trying to make sure his brothers think it is ok so they don’t worry and freak out(even when it is not). he knows you are worried, he probably doesn’t want to go to the hospital. Just a thought. I know you are worried and scared.

Ella FM That’s a really good question and exemplifies why this is so challenging. Gavin says blurry and maybe he means dark. There’s no way for us to get the accuracy we need to feel like we k kw what’s going on.  Everything you said is pretty spot on.  Thanks.  🙂

Just a quick thought about blood pressure and temporary vision problems. I have low blood pressure, and this meant that as a kid if I shifted positions my vision would start to fade a bit. It also happened on roller coaster rides. Once I actually couldn’t see anything after standing up for about 30 seconds, which freaked me out. However, the doctor said that this was common enough with low blood pressure, and that I would grow out of it.
I mostly have grown out of it, though it occasionally comes back in yoga. In any case, with Gavin’s autonomic issues, I imagine he has many periods of low blood pressure. Plus, low blood pressure is correlated with hypermobility. So maybe he means vision darkening when he says blurry vision?

Thank you very, very much.

reality_autism thats so scary. I pray that all gets better for Gavin.

My heart just breaks for him and you all. It does sound like he's as worried and scared by it all as yoiu are. Keeping you all in my prayers.

That's so kind of you but I'm no saint. Thank you for your support.

JenniferWhynott I don’t know that he’s trying to hide these things from us. It just never occurs to him that he should tell us. Thank you so much for your kind words.

Thank you very much. 🙂

Sounds to me like Gavin is getting to the point of being just as exhausted, overwhelmed, and scared of these Crises as you and Lizzie. Poor kid. I don't know how you guys do this day in and day out without going crazy! As always the L&T clan is in my thoughts and prayers!

Oh Rob. I am sorry to hear that Gavin is in a continual gradual decline. It seems to be that he may not want it to be part of the crisis because maybe he understands how severe that makes the crisis and he may be afraid of another hospitalization. He may also be manipulating the situation because he doesn’t want to go back to the hospital. Maybe checking with Dr. Patty to see if she can recommend a way to get him to admit to the blurry vision without manipulating the situation.

I wish I knew what to tell you. I often watch for updates, but don't like to comment because, what do I know? To be honest, I find you to be a saint. I could not go through half of what you do just on a daily basis. I strive to be as patient as you seem to be, though, as a parent, I am sure you freak out plenty. Healthy or with obstacles, parents freak out when they can't fix the problem or issue that minute. But you take a breath (even if its your 1,000,000,000,000th) and you make a plan. If by such and such a time, this hasn't resolved itself, we do plan A. We all do the best we can with what we've got. I hope someone is able to help you decide on how big this issue really is, and I hope it is miniscule. I hope you retain enough calmness to make it through each issue that crashes down on you.