We were involved in a drive by shooting tonight

Celebrating Halloween in our own way

Emmett had an accident this evening but is okay

We were involved in a drive by shooting tonight


I’m still kinda freaking out right now but here’s what happened.  I was in the living room trying to make some progress on the Autism Help Forums, when I heard some noise outside the house.

As I walked up to the front door and began to open it, I noticed two kids (maybe late teens, early twenties), riding bikes.

This was kinda strange because it was about 9:15pm and quite dark outside. The dogs were barking and I was going to step outside and see what was going on.

As I opened the door, the one kid reached out his arm and fired a shot.  I’m not positive that the shot was meant for me but to be honest, I was the only one out there at the time and the gun was pointed in my direction.

I wasn’t hit and as far as I can tell, my house wasn’t either.

After the shot was fired, they casually rode off down the street as though nothing had happened.  As I watched them ride away and turn around the corner, I saw one rider pass the gun to the other and fire off two more shots at house around the corner.

I was already on the phone with 911 and I heard two additional shots.  That made 5 in total so far.

My neighbor was outside and I went over to make sure they were okay and let them know what had happened.  The police arrived in force within 3 or 4 minutes and spread out in search of the shooters. 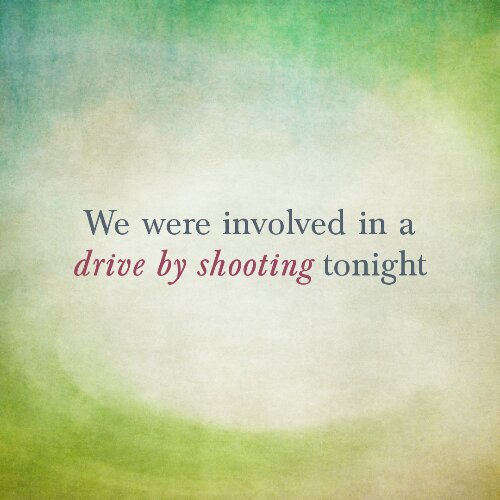 As I was talking to one officer that pulled up to ask questions, there were 2 more shots and he had to speed off in their direction.

In the morning, I’ll look to see if the house was hit.

This is really scary, for obvious reasons but also because of how carefree they seemed to be as they rode their bikes and fired shots as they go.

I don’t think I’ll be sleeping tonight because this has got my adrenaline flowing and I’m still shaking. The cops are still driving around but I doubt they will find them.

So glad your all ok.

scary, glad no one was hurt

Glad you guys are ok!!

Grateful you were not physically hurt. Sucks that this happened. It takes awhile to quiet the emotional damage. We are here for you. Big hugs ….

So glad you were not hit.

I’m glad that you and the family are okay.

I’m glad you all are safe. I always fear stuff like that because of where we live. What a world we live in

People are stupid crazy now days. Praying for peace and a hedge of protection around your family.

Well I’m glad that you and the family are okay.

Glad your ok! Can’t imagine how scary that must have been!

Wow, glad everyone is ok. It’s a crazy world we live in. When the adrenaline drops down, you’re gonna be exhausted. Praying for continued protection.

Glad you are ok..stay safe. What town are you in?

Thank you. Unfortunately, I don’t hold out much hope that they will be found. As far as I know, no one got hurt. That’s a good thing.

Oh my!!! I am glad to hear you are ok, at least physically! I hope those thugs are caught so you can rest easier. Please keep us posted!

Oh my goodness, I hope that they catch them.

shawneerenee31 rosie d rjones22 thanks everyone.  It’s scary but I’m really grateful that no one was hurt, at least as far as I know.  🙂

Unbelievable!  It is scarey their casual disregard for life!  I’m sure the pundits would have much to say about why that is happening, but when it is happening to you, those reasons don’t really matter.  Glad you are all ok.   I’m sure you will think twice before venturing out after dark again!

OH MY GOSH! I am so glad to hear that everyone is unharmed! How very scary! Prayers are with you!