Has anyone asked you how you’re feeling today?

The Reason I Jump: The Inner Voice of a Thirteen-Year-Old Boy with #Autism


This is one of those moments that really has me worried about Gavin ever being able to live on his own.. This past week with Gavin has not been easy and to be honest, quite frustrating.

Elliott had put together a small bowl of fruit to share with his brothers.  He took it upstairs and after a few minutes, Gavin came down and asked me if he could eat the broken pieces of orange that Elliott and Emmett didn’t want because they were…well….broken. 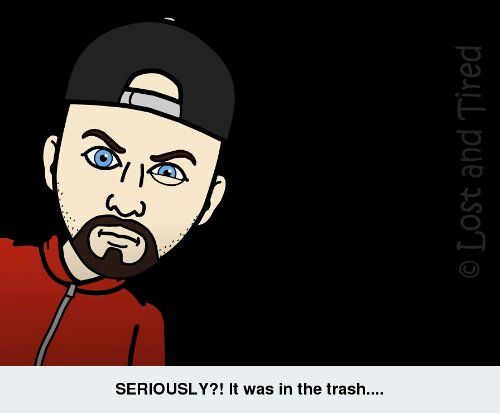 I said sure, no problem Gavin. At no point did he say that the oranges were in the friggin trash.  He “forgot” to mention that part.

30 seconds later, Elliott comes running down the stairs freaking out because Gavin was eating out of the trash.  Elliott is a total germ freak and this was like the worst thing he could have imagined.

I called Gavin down and asked him if he was eating out of the trash…. He didn’t even try to deny it.

Just so we’re clear, Gavin isn’t starving and in fact had just finished a large banana, before rummaging through the rubbish for a snack.

In an eye twitch inducing change of events, we learned that he hadn’t actually eaten the trashed oranges. He said that he had but as it turns out, he hadn’t gotten that far yet.  He had simply retrieved them from the trash and put them on his plate.

His meal was interrupted by me calling for him.  Does that make it any better, I’m not sure?

Either way, I’m not sure why I’m so surprised by this.  It’s not the first time and not even close to the grossest thing he would have eaten.  I’ll spare you the disgusting details but you can probably imagine.

The only thing that he sees wrong with this whole thing is that everyone was horrified… It never occurred to him that eating food out of the trash was a bad idea.

I don’t know what’s going on  with him this week but Jesus Christ, I’m pretty sure I’m at my stress limit.

Not too bad, I take care of adults that are all over the spectrum, and the things they pop in their mouth before I can blink would make anyone sick 🙂
All in the life of a parent or caregiver with special people in their care…

Why wouldn’t you tell the other boys throwing away “broken” food isn’t acceptable? Even if my kids won’t eat the “ugly” strawberries, they leave them for my husband or me. It would take reinforcement for a while, but 1 of mine is profoundly affected by autism and caught on. Produce is expensive.

Maybe it was right on top of the trash;) Is it possible the other boys threw the orange pieces away because he said he wanted them? Maybe the situation wasn’t honestly as bad as dumpster diving…

Kim Bailey I wouldn’t have said yes if he had said Dad can I eat some oranges out of the trash.

Ummm…. there are people in the city that dumpster five and don’t put anything in a fridge and eat that stuff. Turns my stomach but they will likely outlive me….

Gavin asked if he could eat it, you said “yes” …no drama.

Been there! The better question is…why are they willing to eat what’s in the trash…but not what’s on their plate???