Please make the 5am #meltdowns stop


I received two phone calls today in regards to Gavin’s home IVIG infusion.  One was a return call from the Immunologists’s office wanting to know what was going on.  I explained that Gavin’s medications never showed up on Tuesday, like we had been told the nurse last week.

The doctors office is just as frustrated as we are because they’ve been beating their heads into the wall, trying to get this setup.

I’ll be honest, I was starting to get really nervous because nothing has gone right and this process has taken almost 3 months to get setup. Insurance has been an absolute nightmare and as of this week, we are still getting denial letters even though it’s supposed to be approved already.

As I said…. Nightmare.

The second call I received was from the Akron Children’s Hospital Home Health Care Pharmacy.  Apparently this was a completely unrelated call, to my call to the doctors office. 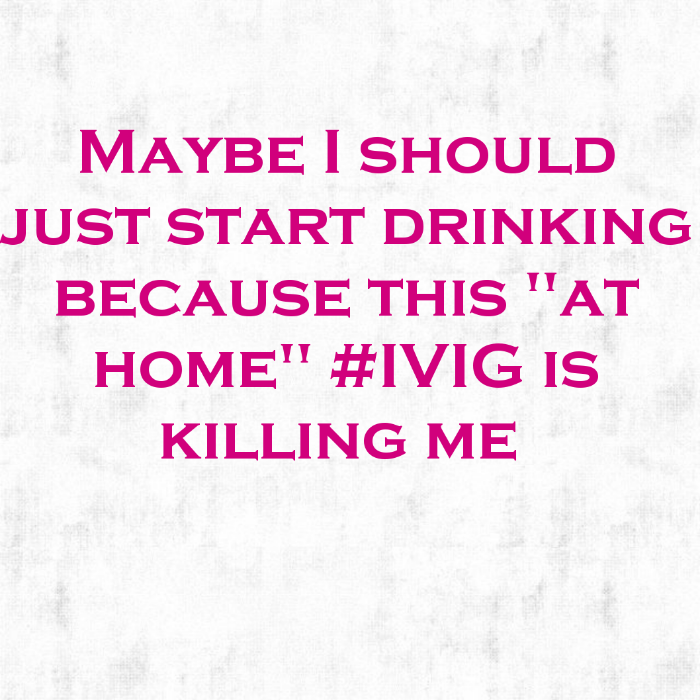 This guy was calling to let me know that Gavin’s medications and supplies would be dilivered in the morning.  That would be Thursday morning.

I asked what happened to them being delivered on Tuesday and he said they were never scheduled for Tuesday.  They are scheduled for the first Thursday of each month.

I’ll anxiously await their arrival in the morning because Gavin is due for his infusion Friday morning and that’s completely dependent on this shipment.

Hopefully, all the kinks are worked out because I’ve had all I can take of this shit.

Any more and I’ll have to change the title of this blog to Lost and Tired:  Confessions of the guy rocking back and forth in the corner, drinking vodka from a bottle in a paper bag.

That’s a mouthful…..  Please let this work out because I don’t want to have to squeeze that into the header. ….  :O

WOW hope everything works out. I.’ve had to do flushes for my son’s pic line when has had to have iron infusions out patient now I give him epo injections once a week for his kidney disease. Have other cares as well what a mix Autism, Prunebelly Syndrome /kidney disease . The latter is fetal so a blessing and miracle he is s till around. He is almost 12.

Thanks Lauren Lown. Is everything okay now?

Sounds i like a lot of work!!!! Irs stressful i just did 3 weeks of at home picc line antibiotics, every 8 hrs…. hated it… and she couldnt go to school for 5 weeks…

i am so right there with you, i just made a comment on the other post that we went to get my kids first ivig infusion for his autoimmune diease. it is approved by insurance but he had not had a pnemonia shot. it  is not so much that he needs the shot (he does i am a non vacine freak cause my kid has always been sick and i was afraid, we will be getting them though , as my son is 21 and says today he needs to go ahead and get them, i agree but not if he is sick!!) but the dr said he needs the shot  so if ins does an audit six months down the road we will have all our ducks in a row. everytime we go to oncology or rhumatology they ask if he has had his pnemonia vacine and i keep saying i dont know but then they  never gave him one. so we have to wait four weeks to do bloodwork again since he got his vacine today to see if he show titers. all his bloodwork says he doesnt have an immune system or a very good one. UGH. i would rather all this be paid for by insurance than owe 40K six months down the road for four treatments. our hosptial is only about 30 min away so it is not a bad ride. thanks for your blog so i can say all of this without boring people i know. Oh and great news is i am glad i dont drink as i would be a drinker. i dont have anything against it, it is that i am not good at it which means after one drink if i dont keep drinking i get a headache and if i keep drinking i end up in the toliet. not worth it lol