We had a massive, massive meltdown this morning that basically had me on overload and shutdown until lunchtime. Elliott was at the helm of this particular meltdown and I honestly have no clue what set him off.

One minute he was fine and the next he was completely freaking out. 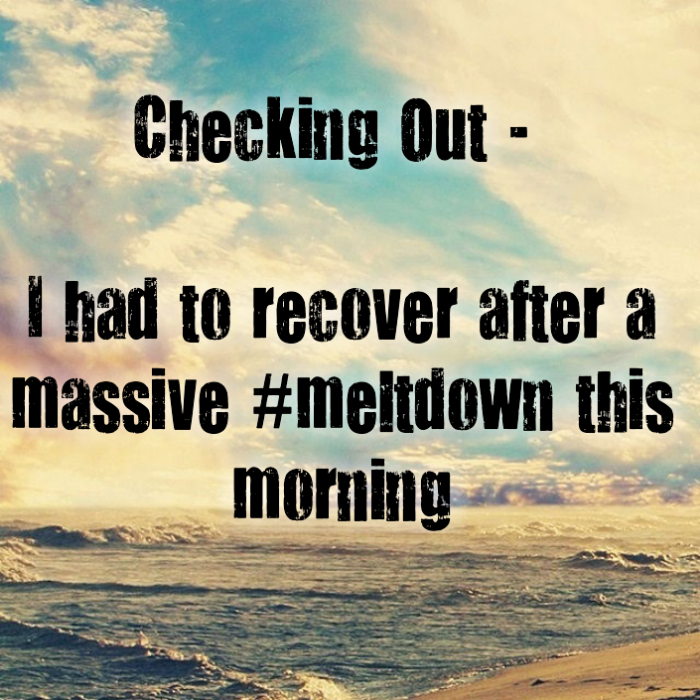 As far as meltdowns go, it paled in comparison to one of Gavin’s meltdowns or tantrums but because it was coming from Elliott and really caught me off guard. Elliott’s been prone to these emotional purges in last year or so.

Since beginning Abilify a few weeks ago, we’ve seen a dramatic reduction in these meltdowns.

I think much of what we’ve been seeing over the past year or so have been the result of his extreme anxiety. He worries about everything and everyone almost obsessively. He gets thoughts or concerns stuck in his head and he can’t seem to stop thinking about them.

I feel like it just drives him crazy after awhile.

Anyway, this morning seemed to come out of nowhere and culminated around him refusing to take his morning meds. He became hysterical and absolutely refused to comply with Lizze and myself.

Start to finish, I think this lasted about 30 minutes. I’ll say this though. That 30 minutes was more draining for me, both physically and emotionally, then living through one of Gavin’s meltdowns or tantrums (which thankfully we haven’t really seen this year). It’s not that Elliott’s was worse. It’s that something like this coming from him is not something that I’m accustomed to.

We are usually caught off guard and don’t seem to have any signs of a meltdown hitting until it actually hits.

With Gavin, we can see it coming from a mile away and can usually prepare for them.

Elliott did finally take his meds and get off to school. Once it was over, he moved on. For me however, I collapsed on the couch and slept until 10:30 am. I was complete depleted from our meltdown encounter this morning.

I pray that this was just one of those things and not a sign of things to come.

Do you do anything In particular when you “check out?” I tend to surf the Web but it’s a bit difficult at times

My son had a massive meltdown yesterday morning. I was so upset after I got him off to school, when I came back home, i left the key to the front door in the doorknob . . . for 3 hours! Boy was I lucky!

i am sorry y’all had to deal with that. it does seem to affect us worse when things come out of the blue. i am glad his abilify is maybe working. i would get me some abilify but i am afraid that with the cymbalta i am on (which i don’t think makes me feel better, i don’t think i am depressed anyway just have a bunch of ongoing problems. i realize they say that there may be a chemical change in the brain happens with a lot of stress and i want to feel better so i have cymbalta) when i lost my ins (which i have back) it was a nightmare because you can’t just go off cymbalta it is really bad if you miss two days. so i am thinking that if i get ability and run out of money or ins that is another thing that i would have to worry about not having. i don’t know if any of that made any sense but have a great day